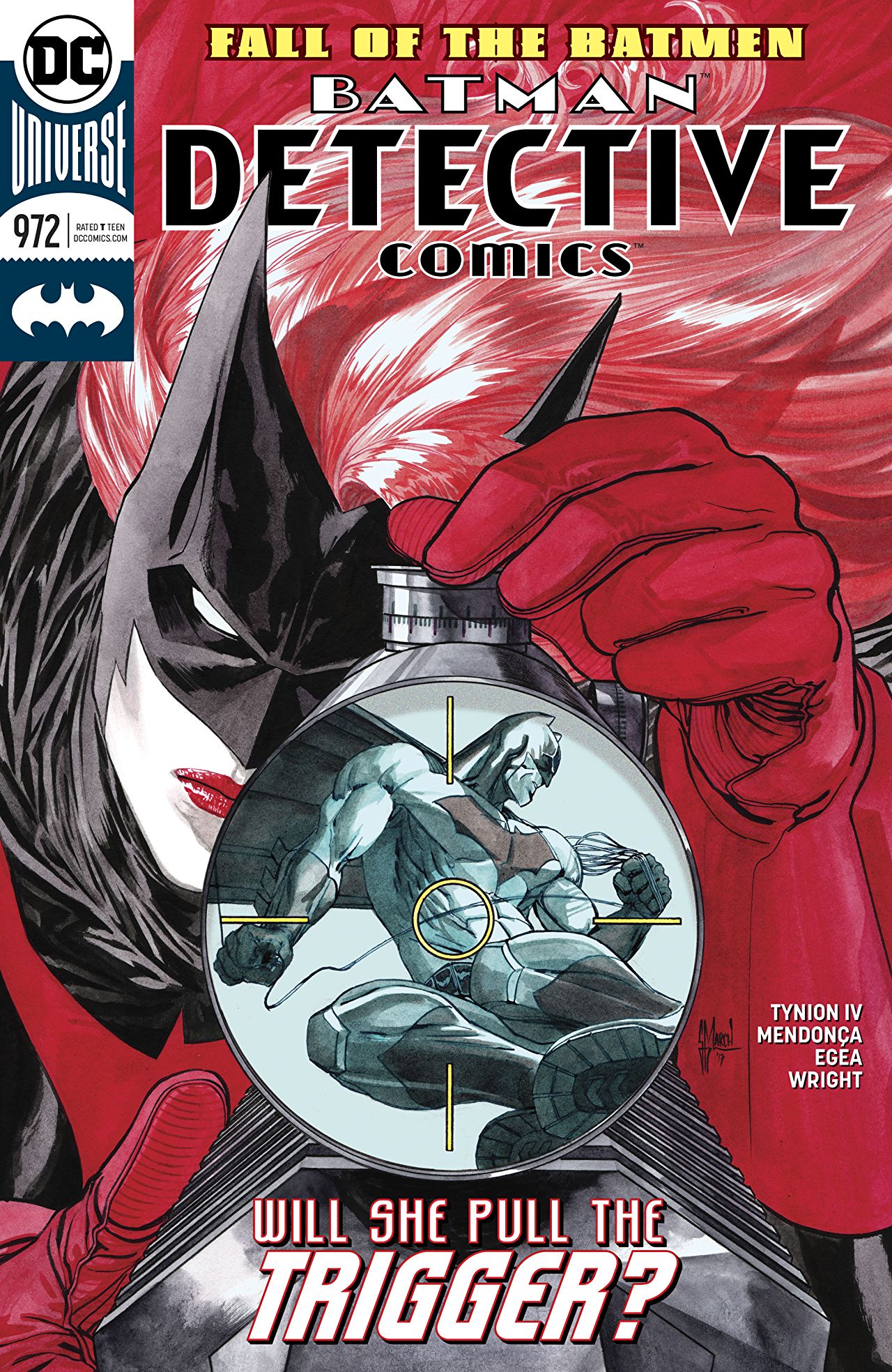 Overview: Clayface, turned by the Victim Syndicate back into a monster, attacks the Gotham Knights with all the skills he gained training alongside them.

Synopsis (spoilers ahead): In Arkham, Clayface pursues Batman, taunting him that the monster is all Basil ever really was. Batman argues that the goodness of Basil is more than a shell of self-loathing. Clayface threatens to kill more of Batman’s sidekicks, and Batman seizes one of Mr. Freeze’s guns to immobilize Clayface. However, he realizes Basil was leaving a shell behind to keep him distracted while he headed straight for the Belfry.

Outside, Mayor Akins confronts Batman. Batman agrees that he sees his responsibility for this disaster, but that he, like Clayface, is a monster, and not part of the Mayor’s system.

In a van headed toward the city, Anarky and the First Victim plan their next move. The Victim wants to watch Batman die, but Anarky tries to stick to the plan of helping the people of Gotham revolt against the system.

In the Belfry, Dr. October has prepared the Clayface cure, which won’t make him a good person, but will allow him to be a mix of good and bad, able to choose right or wrong. Red Robin is furious that the Mayor and people of Gotham won’t give Basil a second chance, but Spoiler advocates for the people who are being manipulated. Tim realizes from Steph’s confrontation that his future self, Bat Tim, predicted that Kate would betray the family right about now.

On a rooftop nearby, Kate meets with her father, who gives her the last weapon Ulysses “The General” Armstrong developed – a gun that destroys Clayface’s physical material in an unstoppable reaction. Kate asks why Jacob is giving this to her, and he says that she must make the choice – to not use the weapon, to try to turn it to non-lethal purposes, or to kill Clayface. She leaves, thanking him.

In the sewers, Batwing and Azrael are ambushed by Clayface, who clearly demonstrates how much he’s learned from his teammates.

In the Belfry, Tim loses contact with Batwing and Azrael as Batwoman arrives. He accuses her of lying about her whereabouts, but Batman stops the fight just as Clayface attacks viciously. However, Cass stands in his way, telling him that if his hatred of the team is real, to hurt her. He cannot, collapsing into his Basil form. However, his attack has damaged the Mudroom’s containment system, causing thousands of gallons of excess Clayface material to pour over him. As Basil loses control again and bursts out of the top of the Belfry, the First Victim soars overhead in a helicopter, gloating.

Analysis: James Tynion IV has built a huge, tragic arc for Clayface. A villain who didn’t have very many serious starring roles in major storylines during the New 52, but instead was featured as sometimes a horrific, overly dark and gritty monster, or a potential anti-villain/Suicide Squad-esque ally (in Batwoman: The Unknowns), and even as creator/father to one of Gotham Academy’s most delightful characters, Katherine Karlo, Tynion has made a Clayface story for the ages. The careful world building of how the Clayface form destroys Basil’s physical connection to his conscience, the use of his excess material in the Mud Room to create a training simulator, his carefully crafted friendship with Cass, and his painstaking attempts to redeem himself with Mudface all come together in an operatic level of sadness and violence. Tynion has done masterful work with Basil, and future writers will do well to take heed when Clayface once again rears his malleable head.

However, given what we know about the resolution of this plotline, Clayface will likely be off the board for the foreseeable future. Jacob Kane giving his daughter Batwoman the Clayface killing gun clearly indicates that the break of the Bat-Family that Bat Tim predicted in A Lonely Place of Living is likely Kate killing Clayface to prevent him from killing another member of the Bat-Family. A tragic circumstance, and one that really leaves us without a clear direction for the family once the clay settles. After so long with one member after another leaving, it’d be nice to see at least Steph, Cass, Tim, Jean-Paul, and Luke stick with Batman, but tensions are running pretty high.

Miguel Mendonca provides strong pencils – a bit more suited to the characters and action he’s assigned than Joe Bennett, and Diana Egea’s inks complement his lines much better than Bennett’s inker did. Jason Wright’s colors are rich and vibrant, though not perhaps as moody and atmospheric as the book initially boasted under Adriano Lucas coloring Eddy Barrows and Brad Anderson coloring Alvaro Martinez. Rumor has it that Barrows’s last issue on Detective will be this month’s Annual, highlighting Clayface’s past, and if so, he will be missed.

Final Thoughts: The tragedy of Clayface’s rehabilitation kicks into overdrive as he faces his former teammates.