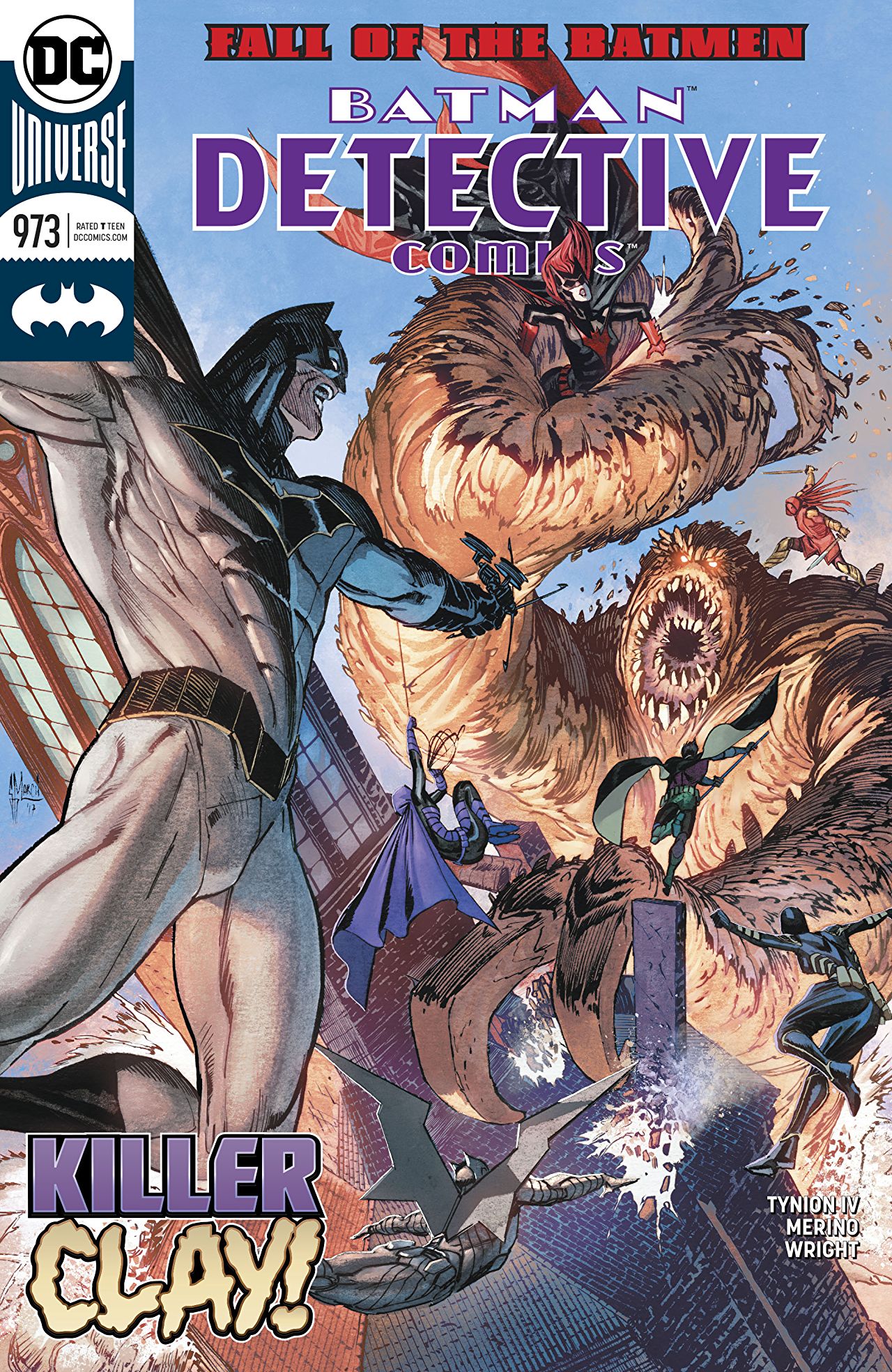 Overview: Batman and Red Robin’s plans for a better Gotham are smashed by the Victim Syndicate and Clayface as Fall of the Batmen concludes!

Synopsis (spoilers ahead): Months ago, Batman observes Red Robin (Tim Drake) constructing his new base, joking about the cost. They discuss the formation of the team, particularly Clayface. Tim expresses great enthusiasm for the idea of rehabilitation, and shows Bruce the prototype of the Mud Room. He’s excited about the chance to come back to Gotham and finding his place after his strange time on the Teen Titans. The scene ends with Tim revealing the name of his new base to Bruce – the Belfry.

Now, in the present, Clayface has been driven back to evil by the Victim Syndicate, and engorged with all of his material from the Mud Room, and goes on a building-sized rampage, destroying the Belfry so completely that not even its self-repairing abilities can fix it.

On a nearby rooftop, Batwoman (Kate Kane) rescues Tim, telling Spoiler (Stephanie Brown) he has a concussion. Cassandra Cain is devastated, after she’d managed to stop Basil’s attack by appealing to their friendship, the destruction of the Mud Room caused him to lose control and grow to such a monstrous size. Batman orders Spoiler to take Tim and Cass to Dr. October in Monstertown to get the cure she’s been developing. He then works to draw Clayface after him in the same direction, away from the city and civilians.

The First Victim watches, rejoicing the in anticipation of Clayface’s slaughter of the citizens of Gotham. Aghast, Anarky (Lonnie Machin) appeals to their formerly shared goal of freedom, but the Victim reveals that they just care about destruction and death. Lonnie rejects this evil, and attacks the Victim, though their personal energy shield stops his initial strike.

Batwing (Luke Fox) and Azrael (Jean-Paul Valley), recuperating from Clayface’s attack in the sewers, get to Luke’s Foxtech lab, and Batman asks them to send out all the Bat-robots Luke has available, under Azrael’s Batman-AI-empowered control, to assist in the fight.

In Monstertown, Tim continues mourning the loss of the Belfry and all he worked for, as Steph comforts him. Dr. October explains the cure to Cass – she must inject it into Clayface’s brain, which will contract all of his matter into his human form. This process will allow his mind to re-assert itself, but only for a short time, because of all the mass he’s absorbed, so they’ll have to hope that once the cure gives him his mind back, it will extrapolate back when he is forced to expand in size to accommodate his material. As Cass heads out, Anarky arrives, bringing an unconscious First Victim. He says that he’s sent out a signal to all of the civilians who were being manipulated by the Victim, telling them to go home to safety. Steph hugs him, and he tells her he’s leaving. She says she’s where she needs to be, now, and Lonnie gives her a flash drive with information on the First Victim so she and Batman can get them the help they deserve.

As Clayface approaches Monstertown, Batwoman tells Batman that the cure isn’t a good enough plan. She reveals her possession of the Clayface killer gun from her father, and Batman rejects the idea immediately. The Batmobile is sent flying by the mammoth Clayface, just as Cass manages to flip her way to his head and inject the cure. Basil shrinks to his original size, and is horrified at what he’s done. Cass tries to convince him that it’s worth continuing to seek redemption, but he tells her that while she is good, he is not at his core. Over the comms, Kate tells Cass to close her eyes, and shoots Basil through the head, as his Clayface form begins to reassert itself.

Analysis: Thirty-nine issues ago, James Tynion IV stunned the Bat-fandom with the inclusion of Clayface as part of his Bat-boot-camp concept. Over those issues, he setup little details of the world being built up – the excess psychoactive clay from Clayface being used as a battle simulator in the Mud Room, the friendship between Cass and Basil, both seeking redemption, the struggle between Kate and her father’s Colony, the rivalry between Tim and the psychopathic Ulysses “The General” Armstrong, the brilliant Dr. Victoria October and her search for a cure for Clayface, Stephanie Brown’s rebellion in response to the Victim Syndicate, and her collaboration with Anarky – all of which come together in this issue. I’ve been loving the ride the entire way – though a few issues may be a bit less successful than others, Tynion has a real gift for the character’s voices, their relationships, how to tell a simple but really enjoyable action/crimefighting story, and his pure love of all of these characters shines in every panel. However, despite this love and generally polished scripting, I’ve been quite anxious that all the plates he’s been spinning (and the ones I’ve listed are only the ones that are related to this particular finale – there are still a massive number of plates related to the ongoing plot that will presumably be headed to the final showdown of issue #1000, Tynion’s stated goal for his run) won’t come together to form a satisfying conclusion, since every arc so far has just stopped a problem in a very temporary fashion, never providing any kind of serious closure.

I can confidently say that Tynion’s skills seem to be more than up to the challenge he’s set for himself. Under his pen, Tim Drake and Batman’s plans for the team (the Gotham Knights) to usher in a new era of peace for Gotham and a new hope for its criminals has grown to this point. Event after event has shaken that dream – Tim’s “death” at the hands of the Colony, Steph’s defection, Shiva’s attack shaking the city’s structures to the core with her assassination of the Mayor – and finally, we have its breaking point. As Tim says in this issue, it’s all gone – and after nearly forty issues setting up this dream, Tynion has knocking it all down without hesitation. The tragedy of Clayface and Tim’s dreams are woven tightly and incredibly satisfyingly. One hopes that this arc will inform whoever brings Clayface back in the future, as a major milestone in this iconic Batman villain’s history. Though as previously mentioned, there are still dozens of plates still spinning in the air, after this arc Tynion has more than earned confidence that he can bring it all off.

Fill-in art team of penciller Jesus Merino and colorist Jason Wright do an excellent job of rendering the destructive terror of a fully enraged and empowered Clayface. They take Alvaro Martinez’s multiple-mouthed design to its extreme conclusion. Additionally, Merino’s facial work fits well with both the other fill-in artwork by Miguel Mendonca and Joe Bennett for this arc, and also fits with the extremely polished, clean-lined, highly detailed and greatly appealing standard set by main series artists Eddy Barrows and Martinez. Though clearly a shakeup on art is coming, with Barrows likely leaving the title after this month’s Annual (detailing the origin of Clayface, appropriately), Martinez is scheduled to return for the milestone issue #975, and guest artist Javier Fernandez from Tim Seeley’s recently concluded run on Nightwing for a few issues. Hopefully editorial can find someone worthy to replace Barrows, and work to schedule more consistent art for the arcs for this incredibly fast-paced and demanding title.

Where do we go from here? The next few issues are clearly set to deal with the consequences of Kate’s decision to kill Basil, and we know she’ll be joining her father in the Colony as a result. The arc afterwards is titled “Batmen Eternal,” so while the team as Tynion originally set it up is shattered beyond repair, with Batwoman leaving and Clayface dead, it’s clear that the idea of the Batfamily – or “Batmen” – is still very much Tynion’s goal. Tim and Bruce will have to face the consequences of Tim’s overreach in the early part of this arc, but I’m fairly certain that the remaining team-members will find their places as heroes. Steph has, thankfully, decided that she’s where she needs to be, and we’ll have to see how that plays out. Cass will be searching for meaning in the wake of her friend’s death in front of her eyes, and Batwing and Azrael will likely continue to fight the good fight alongside Bruce. But what that will look like? We’ll just have to wait and see. And I, for one, will do so with great excitement as a result of this arc.

Final Thoughts: A year and a half of groundwork comes to a powerful and tragic climax in the first of James Tynion IV’s major story arc conclusions.