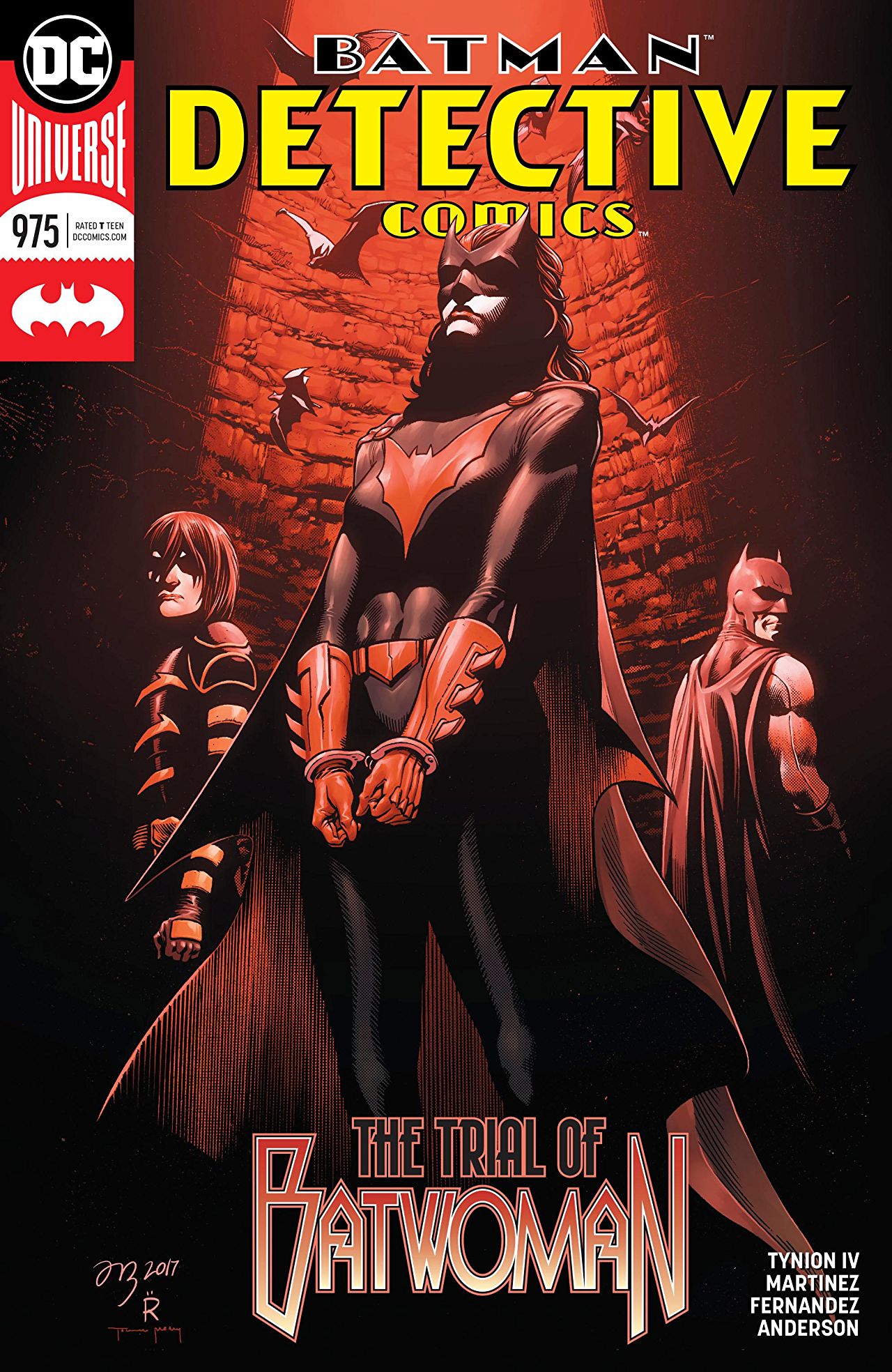 Overview: The entire Bat-Family gathers in the cave to discuss Batwoman’s status after she killed Clayface.

Synopsis (spoilers ahead): Many years ago, at the funeral of Gabi and Beth Kane, the young Bruce Wayne comforts his cousin Kate. He tells her that it never stops hurting, recalling the scene where a young Kate tried to comfort him at his own mother and father’s funeral. Bruce tells her of a dream he has, of killing the man who killed Thomas and Martha, and Kate states, with a dark fury in her eyes, that they should find and kill all the people who hurt them.

Now, Kate lies alone in bed, sleepless, thinking of Cass’s face as she held the dying Clayface. She receives a call reminding her of the date.

Nightwing drops in on Batgirl in Burnside’s Clock Tower, her personal base. Babs is studying the events of the past week culminating in Clayface’s death, while Dick says he plans to follow his heart. With an eye roll, Babs gives Nightwing a ride to Wayne Manor.

Cassandra Cain looks out of Damian Wayne’s window, prompting the current Robin to snobbily order her from his space. In response, she tosses him to the ground, and an amused Tim Drake helps his fellow Robin up. Alfred collects Cass, telling her of his plans to make cookies and watch the ballet, as the rest of the boys head down to the Batcave.

Dick throws an arm over Tim’s shoulder and invites him to Bludhaven, while Babs gives him the big-sister “I’m worried about you because you just returned from the dead” talk. Jason is already there, surprising the rest of the family, considering the question of Kate killing hits fairly close to Jason’s philosophical and practical home. However, Bruce says he wanted to hear from everyone, and they all gather around a table to begin the trial.

Kate, meanwhile, is taking on a submachine gun wielding gang of sentient apes, while Luke Fox, Batwing, asks her what she intends to do about her father, offer to lead the Colony. She says she’s considering it, and Luke says he and Azrael (Jean-Paul Valley), are with her, though he warns caution.

In the cave, Tim starts the conversation. He gives a brief history of his time as Robin and Red Robin and makes the case that Batwoman’s choice was cynical, not idealistic, and goes against what Batman and his allies stand for – hope and justice, not vengeance and punishment. Dick follows, saying he believes the best of everyone in the situation, and grieves at the outcome. His own position is that Kate can come back, but she has to earn it. Damian only offers his arrogant opinion that none of them should be part of the family. Jason then gives his opinion – that Batman’s anger stems from bruised ego rather than principle, and votes that she stays.

Last, Barbara makes her case: that the Belfry was Batman’s way to try to convince Kate to stay on his side, instead of the Colony’s. She accuses Batman of allowing Tim to set up the Gotham Knights when he knew it was unstable and couldn’t last. Tim tries to insist that it could work, but Babs says based on her research and conversations with Stephanie Brown (Spoiler), the team hasn’t helped its members as much as it should. She brings up Cassandra’s isolation and ends by saying that Batman fears that Kate is right and he is wrong, that only Kate Kane can make the decision of whether she remains a Bat or not.

In the cemetery, Kate is visiting her mother on the anniversary of her death. She pours out her heart about her regret over hurting Cass when all she wanted to do was save lives, particularly Cass’s own. Her father arrives, and Kate tells him that she’s in. The Colony helicarrier and helicopters uncloak above them as Jake says, “Then let’s get started.”

Analysis: After “The Fall of the Batmen” showed both Tynion’s great strengths and weaknesses as a writer, it’s really wonderful to have this issue take a breath from the frantic pace of the past two arcs and have its characters struggle with the weight of everything that’s happened over the past two years. In a carefully crafted oversized issue with very little action (despite a hilarious and brilliantly constructed fight between Kate and the Gorilla Boss gang), every bit of dialogue exchanged shows Tynion’s knowledge of and love for the Bat-Family. Though he doesn’t often write Dick, Jason, Damian, and Barbara, he provides beautifully thoughtful portraits of their reactions to the devastating results of Clayface’s death. Dick’s hope, Damian’s snobbery, Tim’s idealism, Jason’s dark determination, Bruce’s silent calculation all ring completely true. However, it’s Batgirl, Barbara Gordon, who stands out as a test of Tynion’s ability to capture voice. Her cold, clear analysis of Batman’s path from “Rise of the Batman” to now shows the woman who was Oracle for a quarter of a century and ran one of the most effective action teams in the DC Universe for most of it. She may be a lighter and fluffier character in most of her appearances today, but it’s fantastic to see Tynion give her the maturity and intelligence she deserves.

For all of Tynion’s brilliance in writing, the true standout of the issue is the art team led by penciller Alvaro Martinez. Tynion has said that Martinez has a true gift for layouts, and the consistently intelligent use of two-page spreads, splashes, and quiet three-layered pages showcase that ability to the utmost extent. Though series lead penciller Eddy Barrows has left for now, and a large array of fill-in artists are keeping the frantic twice a month pace, it’s good to know that Martinez will shepherd this run to its end (he is scheduled for the final two issues in May), since his pencils with Raul Fernandez’s confident inking have always been the most appealing of the various art teams since the book started. Veteran colorist Brad Anderson finds the perfect balance between the shadows of Batman’s cave and the bright colors of the family’s costumes. Tiny panels like Batwoman taking off in the rain, shot from below, show Martinez as the absolute master of the comic book craft that he is. Martinez even provides a rendering of Batgirl’s Burnside costume that doesn’t seem out of place among the Robin’s much more militarized looks – a truly impressive feat.

For the past two years, Tynion has said in interviews that he wanted to take Detective Comics from 934 to 1000, 66 issues. Recently, we found out that he would leave 19 issues short of that goal. The past few months have given us the great heights of Clayface’s tragedy, and the lows of Stephanie Brown and Tim Drake’s confused and under-rendered conflict. There’s been a sense that The Button’s restructuring at the last minute and the ripple effect of Detective’s long-term plotting after the League of Shadow’s arc has caused a few elements to spin out of Tynion’s control. However, despite these downsides, this issue gets the series on a much firmer footing going into the final arc of Tynion’s run, Batmen Eternal, promising to wrap up the conflict between Batman and the Colony for good. If the rest of the arc is as polished and powerful as this piece, then despite the sorrow at the loss of nearly twenty issues in the planned story, it will definitely be a run of Detective Comics that can hold its head up among such greats as Chuck Dixon’s groundbreaking 90s work, Greg Rucka’s two fine runs, and Scott Snyder’s deservedly legendary Black Mirror year on the title. Tynion’s Colony work has added to Gotham, to its characters, and to Batman himself, and this reviewer at least will be very sad to see him go.

Final Thoughts: Tynion and Martinez return to top form, with pitch-perfect voices and stunningly detailed and appealing illustration for this stellar anniversary issue.