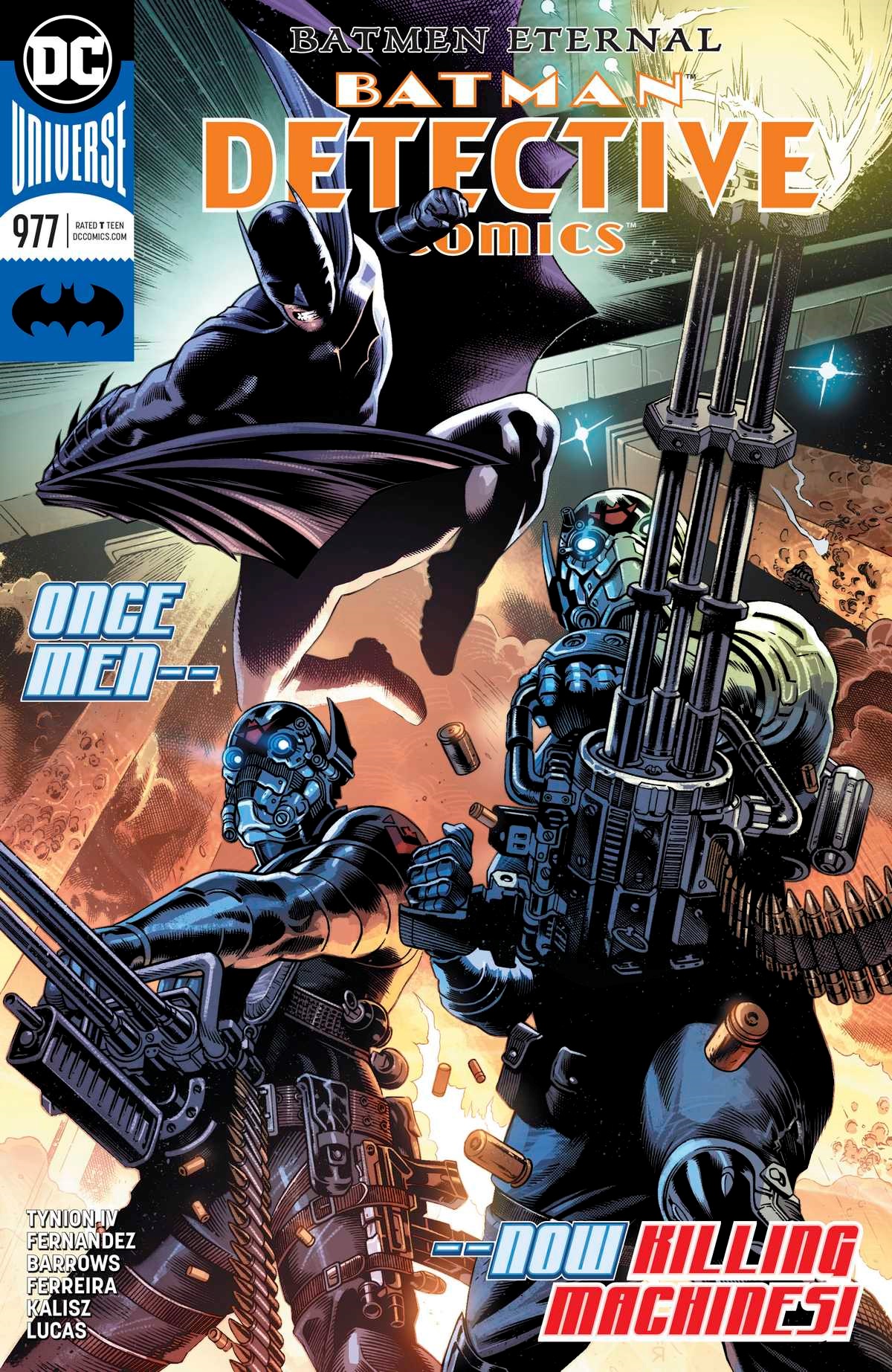 Overview: Faced with a horrifying vision of the future, Tim Drake attempts to make the right decision for his life.

Synopsis (spoilers ahead): A few years from now, Tim Drake is a student at Ivy University, along with his friend Ives. The two walk the halls of the college, Tim jokingly hinting about his former secret life as Red Robin (unbeknownst to Ives), when they hear that Gotham has been re-declared No Man’s Land by the president of the USA, because of Batman’s actions. Tim rushes to his room and pulls out his Red Robin uniform, declaring that Kate can’t just let this happen.

Over Wayne Manor, the Colony’s helicarriers order Batman to surrender and deactivate all defenses. An aging Batman retorts, “Make me”, and works with Brother Eye to continue his plans. Without his mask, Batman activates seemingly lethal explosive traps in the Manor, but as he takes down Bat-soldier after Bat-soldier, Kate shoots him from behind. She offers him the chance to surrender, telling him she doesn’t want to kill him, but Bruce refuses again, and she shoots him point blank. Red Robin breaks in furiously, and Batwoman and Tim face off.

In the present, Ulysses “The General” Armstrong ends the simulation by Brother Eye and tells Tim that the future will end that way if they don’t take action. He shows Tim around his lair built with money earned while designing weapons from the Colony. Tim asks Ulysses what he wants, and the General responds that he wants to be more than just a minor villain in Batman and Red Robin’s history – he wants to shape the future. Tim tells Ulysses he needs to think, and though the General is disappointed, he lets Tim leave to think about it. However, he urges Tim not to wait too long, as Batwoman has officially joined the Colony.

At Foxtech, Tam Fox yells at Luke for leaving to join the Colony for most of the next year. Luke smiles and explains that she can run the company better than he can, and Batwing needs to do some good in the world. Kate promises that she’ll keep Luke in line, and Tam agrees, embracing her. Jean-Paul, Kate, Luke, and Tam go out to eat, while Kate’s lieutenants head back to the airship.

As they are teleported to the ship, the two Colony soldiers chat, but as they suit up, their armor is taken over by Brother Eye.

Tim joins Batman on a rooftop as he surveils some bad guys below. Bruce tells Tim he won’t rebuild the Belfry, and Tim says that he’s not there to fight. Instead, he wants to rebuild his life, skills, and relationships. Batman smiles and tells him to take the two guys on the right. Before they can jump in, the two Brother Eye controlled Colony soldiers jump in and start decimating the room with machine gun fire, as the General uses them to push Tim into his plan.

Analysis: The second of the six-issue final arc, “Batmen Eternal,” this issue turns its focus fully on Tim Drake, first with the brutal future simulation from the General, showing Batwoman killing Batman. Though it seems likely that something similar happened in the future of the Bat-Tim of Tomorrow, given his hatred of Batwoman, there’s something a bit exaggerated about this simulation, making one think that the General and Brother Eye may have twisted the future records from Bat-Tim’s wrist computer in order to push Red Robin into joining his campaign.

Tynion shows his love of Tim clearly here, as he throws in an appearance by Ives, Tim’s best friend from his Chuck Dixon series in the 1990s. He also continues to weave the connection between his series and the wider world of continuity, showing Luke Fox’s world widen up a bit. The Rookie Batsuit from Superheavy shows up again, after its great role in the “Intelligence” arc, and its emoticon expressions continue to delight. Tam Fox appears for the first time in many years, and Luke explains to us that though she was in a coma the last time we saw her (at the end of the Batwing series), she recovered a few years back and has been running Luke’s company. Tam’s appearance is really nice for fans of her from Tim’s Red Robin series by Christ Yost, Fabian Nicieza, and Marcus To. Though there are many more wonderful details Tynion slips into the script, the last we want to highlight is the chilling “EYE AM IN CONTROL” when Brother Eye and the General take over the Colony armor suits. All of these references not only work as dramatic, funny, and touching on their own right, they reward longtime readers with extra layers of meaning.

Primary artist Eddy Barrows provides the first ten pages of pencils, surprising to readers who expected the nicely drawn Detective Comics Annual #1 to be his last interior work for the series (though he’ll provide the main cover for Tynion’s last issue, #981, expanding the concept he used for the first cover of the series, #934). Barrows’ facial expressions are much more consistent and appealing here than in most of the last times he’s drawn for the series, with the slight exception of Bruce’s final grimace of defiance at Batwoman. It’s nice to see Tynion writing the issue to play to Barrows’ design and creation of much of the look for the Bat-Tim of Tomorrow world – Barrows designed the cover for Batwoman #6, the first glimpse of the Pax Batmana began by the conflict between Tim and Kate here.

Artist Javier Fernandez transitions nicely in the second half of the comic, giving the whole cast some really nice expressions as they interact with each other. Though Fernandez’s faces tend to be a bit overly loosely sketched, often sacrificing detail for an impressionistic effect (and a reliance on diagonal parallel lines as a shading effect), this issue is rich with detail and atmosphere. It looks like Green Arrow will have a strong art team when Fernandez joins the Benson sisters on that title in the summer. Adriano Lucas gives the future section drawn by Barrows a warm glow, even in the terrifying sequence showing the death of Batman. John Kalisz colors Fernandez’s pencils with the cold blues and greys we’ve come to expect from this artistic pairing, though the scene in the General’s penthouse is warmly colored, showing the yellow lights of the city through the entire glass walls and floor of the apartment – a lovely piece of design between penciller and colorist.

This issue drops the plot threads raised in the previous issue of Cassandra’s reaction to the death of Clayface, and instead focuses the vast majority of its pages on Tim’s conflict. Hopefully, Tynion balances the focus to show more of the motivations and choices of the rest of the team – Luke’s moments with his sister and Kate were a welcome section. Since Jean-Paul Valley is due to appear in the just announced Justice League Odyssey book, written by Josh Williamson and drawn by Stjepan Sejic, hopefully, Tynion provides some transition to that status quo in this arc as well. All in all, a really nice issue focused on Tim, full to the brim with continuity Easter eggs, building to the ever more ominous conclusion.

Final Thoughts: As the General tempts Tim Drake, the plot swirls to the next level of complexity as “Batmen Eternal” continues.