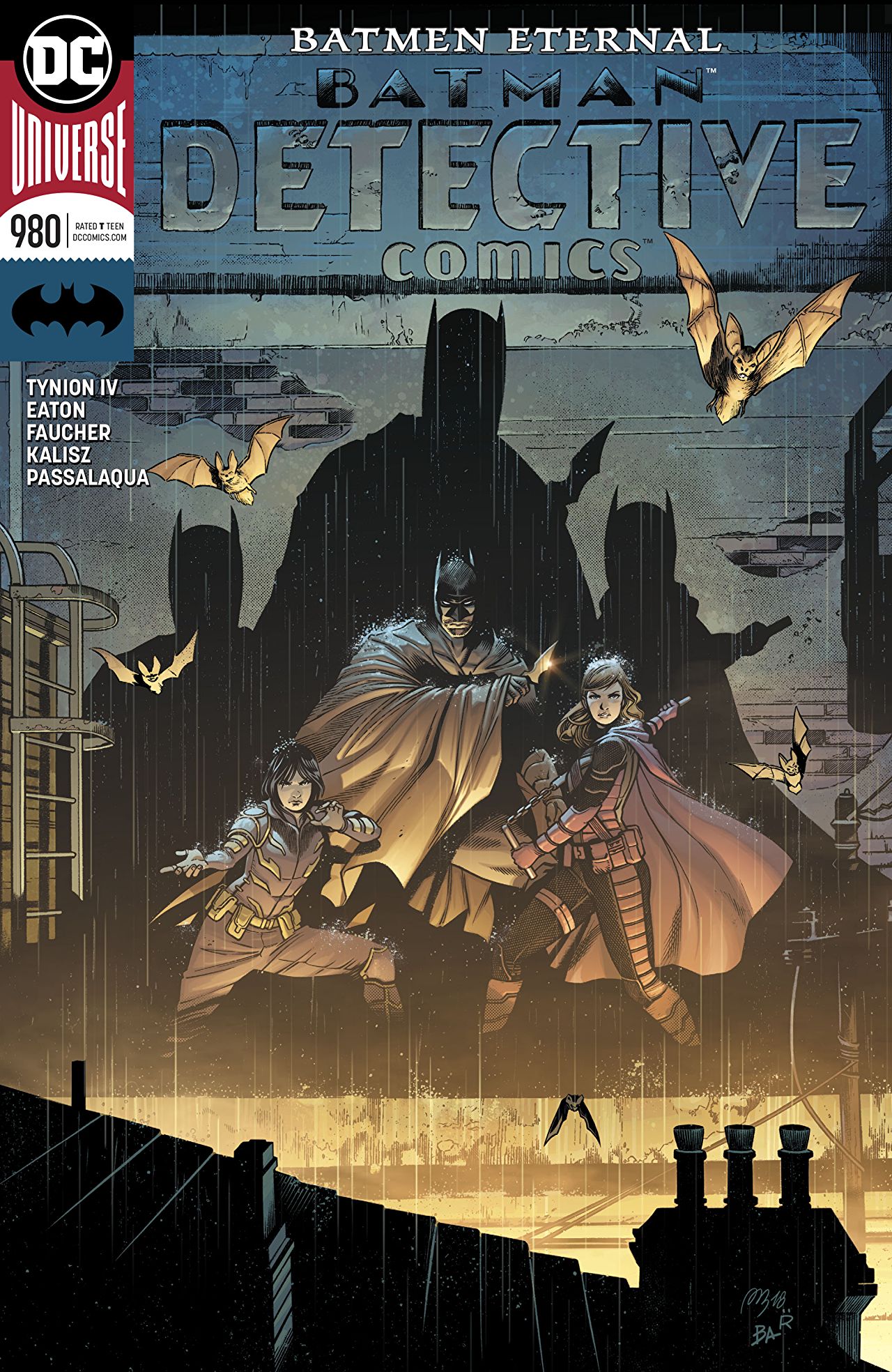 Synopsis (spoilers ahead): At GCPD, a nosy Harvey looks over Renee’s shoulder and shares that she misspelled “Clayface” in her report. An agitated Renee tells Harvey that he can help her tackle one of the stacks of paperwork. Before he can give a sarcastic comment, Renee excuses herself to answer Kate’s incoming call.

Kate yells to get out of GCPD as soon as possible. At that moment, a hoard of OMACs break through the windows and corners the officers. Tim (now an OMAC) tells them all that he is thankful for what they do, but he needs more soldiers for his army to keep his city safe. He shoots all of the officers, sans Renee, with nanotech bullets that spread the OMAC virus. Before he can shoot Renee, Kate crashes through the window kicking him in the jaw.

She goads him into killing her because of the future she helps create (due to the events in “A Lonely Place of Living”). Ulysses tells Tim that it is his call in what they should do with her. Tim authorizes his unit to use lethal force. With Renee pleading for her to not take on this suicide mission, Kate runs out of GCPD and sprints across the rooftops.

Kate asks if Bruce’s crew is having a smoother time than she is. In an elevator shaft, Bruce, Cassandra, and Stephanie (yep, she’s back) meticulously scale the walls while trying to avoid all the sensors. Bruce asks Steph if her drones are holding up due to the amount of work they are under masking the team’s presence from Brother Eye.

As they approach an air vent, Steph tells Bruce that her drones will not be able to hold out for much longer. Bruce tells the team that they will need to act fast. As alarms sound, Ulysses turns and sees the group heading his way. Ulysses panics and tells Tim that he should return to base because Batman is there.

Tim, still in pursuit, tells Kate that he is Tim, and he wants to eliminate her. Kate calls him out on his hypocrisy; Tim tried to have Kate thrown out of the family due to stopping a Justice League level threat that would have killed hundreds of civilians and destroyed all of Gotham (in reference to killing the unhinged mega-Clayface). She tells him that he is not as innocent as he claims to be. He responds that future Tim had not seen the future and what she does to destroy the Bat-Family and legacy. Kate goes on the offensive but quickly is disarmed.

At Belfry 2.0, Steph is stumped by the advanced nature of the code due to it being from an alternate timeline future. She tells the group that she recognizes the fundamental base layer; and given enough time, she might be able to find a way to get through. Brother Eye tells her that that is unlikely. Bruce tasks Cass with protecting Steph while he walks towards Brother Eye. (Well, technically he walks to some computer monitors because Brother Eye is everywhere, but I digress.) Brother Eye tells Bruce that he was an inadequate father and laments how Bruce created him and then placed him on a shelf. He states that Tim recognized that he was needed; together he and Tim can fix what Bruce has broken. At that moment, two OMACs attack Bruce.

Tim, via nanites, shows Kate what she did in the future: with Colony soldiers at hand, she enters the Batcave and executes Bruce. Because of this, Tim cannot allow her to live, the future depends on it.

Brother Eye tells Steph that her attempts are futile. He tells her that there is no hope for salvation. He tells Steph and Cass that they are unwanted, castoffs of the Bat-Family. Brother Eye shares that they do not know what has been taken from them, what their future could have looked like. He shows them a hologram of them in their Batgirl uniforms; he shows them that were actually a part of the family, not destined to be the outsiders they are now. Steph starts laughing. With a confused Brother Eye listening, Steph tells him that he wanted to hurt them by showing how lowly they are in comparison to the alternate timeline. But, all he showed her was their true potential, that they are loyal members of the Bat-family. Steph tells him that with the knowledge and access of the entire history of the alternate timeline, she will use every piece of information to destroy him.

Analysis: I will say this, this may be Tynion’s best arc in his entire run.

This issue is extremely well balanced; I got halfway through the issue thinking I was approaching the end, and I was extremely happy I had more to read!

I am starting to wonder if Tim has genuinely lost it. He views Kate as his mortal enemy because of what an alternate future version of Kate does. In sci-fi, there are many stories (e.g. Minority Report) that deal with people being punished for their future actions. For an example closer to home, Donna Troy got the same treatment from the Justice League as Kate gets from Tim (read the latest Titans arc). The League saw the destruction that Troia caused and wanted to make sure that that never will happen, so they put her on house arrest. Tim wants to incapacitate (lethally or non-lethally) Kate to prevent what she will become.

But, this begs the question whether Kate is destined to become her future executioner self? Free will, a topic debated by philosophers and religious leaders alike for time immemorial, is at the heart of the matter. In my view, this situation that Kate is in is analogous to me having parents who were both drug addicts and alcoholics. Is it necessary for me to start rehab now without because I am genetically inclined into falling down those paths? No. The thing is, if I was pushed too hard to not fall down those paths, I might go down that route anyway. It weird that by trying to prevent a crisis, we may be creating it instead. Thus, precog Tim might be creating the Kate who becomes the executioner in the future.

If you are still with me, let me recap by saying that Tim saw an alternate future while in captivity. While trying to change the future, he might be creating that exact future he saw. That is the issue of acting with future knowledge; you might either create that future, or you might just avoid it. And if you are a teenage genius superhero with PTSD that feels like he is not part of his family, he may snap and lose his rationality. He may be creating the problem that he is trying to fix. He may cause great destruction while believing the delusion that he is doing the right thing.

I like that Steph is back; I love her sarcastic interactions with Bruce. But, I do find it a little far-fetched that she has the technical knowledge to cloak the team from Ulysses and Brother Eye and the ability to hack into their systems. If this was a Justice League story, I promise you that it would take five times as long for Cyborg to do the things that Steph just did.

Now, the alternate versions of Steph and Cassandra are interesting. It seems that they are seeing these costumes for the first times in their lives, which means that they do not remember their pre-Flashpoint selves. So this begs the question, is this alternate future that Tim is haunted by the pre-Flashpoint timeline or just another timeline that includes Steph and Cassandra as Batgirls? Since evil Tim traversed hypertime (which plays by different rules than normal time travel), he may be from the pre-Flashpoint timeline. If that is the case, then Doctor Manhattan did more than we thought he did. We know he kept the Flashpoint timeline going even after Barry let his mom die again (read “The Button”). What if he did more than that? A great question that only time (and maybe Geoff Johns) may answer.

The art in this issue is incredible. I am always surprised by the sustained excellence of the art in Detective Comics. You would think with double shipping this title monthly that there would be some drop off in quality (especially after keeping this schedule since Rebirth), but this book has been rock solid in terms of quality and consistency. Each panel is perfectly colored and immaculately detailed. This art team knows what they are doing. Also, I would check out the variant cover. Rafael Albuquerque drew a cover worthy enough to be hung on my wall; it is a beautiful work of art.

Final Thoughts: Tynion’s last arc just keeps getting better with each issue. This is a definite must-read.