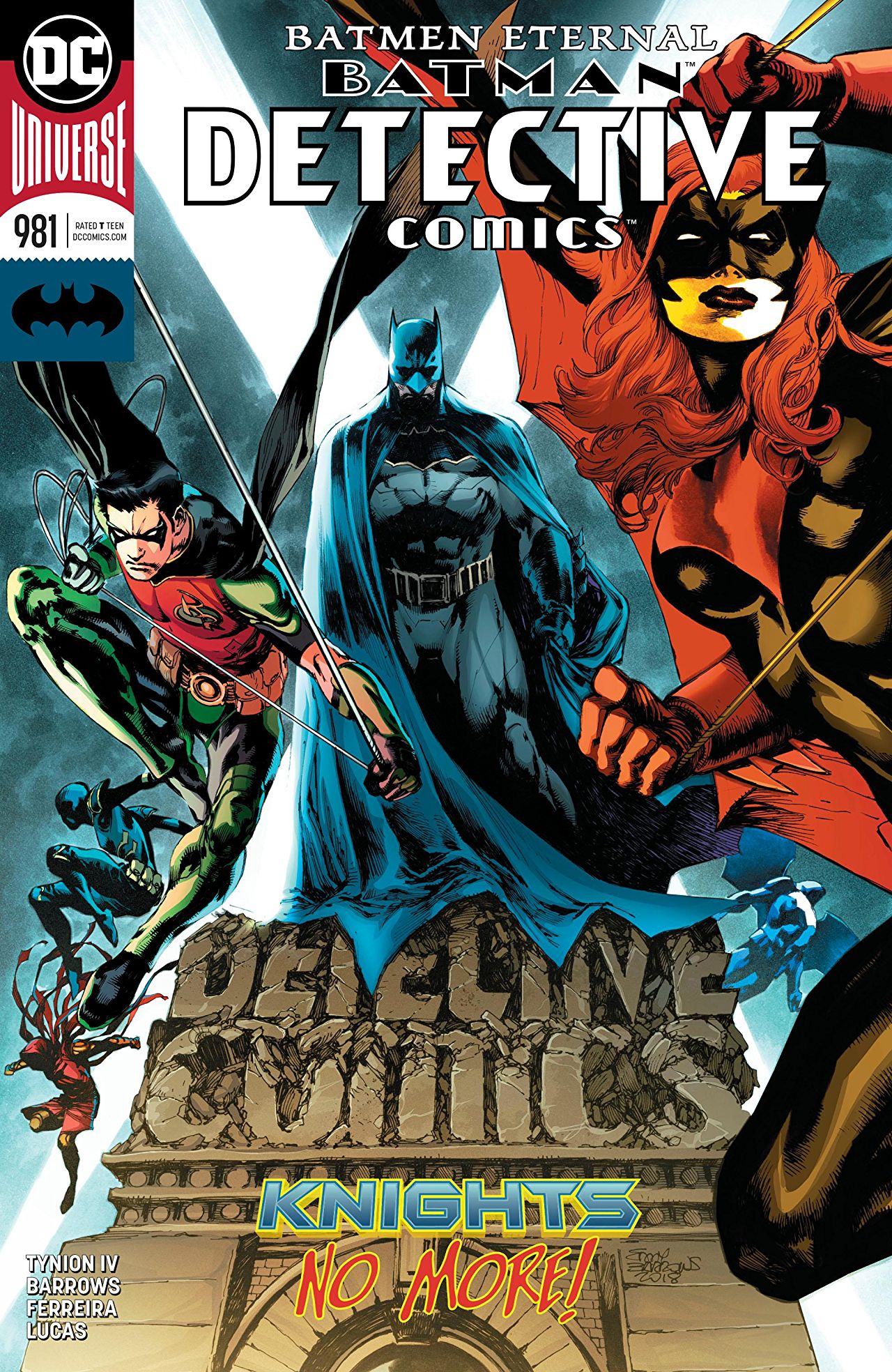 Overview: The Gotham Knights rejoin for one last battle against Brother Eye and the General.

Synopsis (spoilers ahead): Continuing from the last issue, Tim shows Kate the future (via the OMAC nanites). He shares that they were always destined to be enemies. Because of Kate’s tactics, she was forced out of the family, and Tim had to track her down.

As Tim shows Kate this disgusting future, Steph chimes in via the comms that Tim was not seeing their actual future. Steph shares that Ulysses and Brother Eye have been manipulating Tim this entire time, in both the present and future timelines.

In Belfry 2.0, Bruce and Cass join forces to stop the OMACs and give Steph more time to be able to hack Brother Eye. Bruce tells Cass that he is sorry. This battle is not hers to fight, it is his; he did not want her to get hurt. Cass tells him that she just saw this other world where she is not doomed to be bad. She tells Bruce that she is a Bat and this is where she is needed.

Steph tells Tim that he has seen that actual, real future. Yes, Kate pulled the trigger and Bruce is dead, but that is not the entire truth. Steph shows them the unaltered version of the future.

(Future) Bruce asks if what he is reading is true, that the orders are to bring Batman dead or alive. Kate acknowledges that things have gotten from bad to worse; the government will not ignore what he is doing in Gotham anymore due to what happened to the League. Kate shares that they could play cat and mouse around the world, because nobody will think twice about the great and mysterious Batman slipping out from her grasp. Bruce tells her that he is dying, due to radiation exposure via the Brother Eye Satellite. He shares that he has been aggressive as of late to make right as much as he can before he dies. Brother Eye is apart of his plan, and when Brother Eye has finished his final protocol, it will self-destruct and all the files on the Bat-computer will be deleted with Bruce’s vehicles and weapons being deactivated. Kate is confused by everything that he is saying. Bruce shares that Batman does not have to be eternal. Batman is an idea that he needed to make the world work for him. Although Batman gave him purpose, it is holding back all those who want to bring Gotham out of the darkness and depravity it lies in. He wants his children to have a better a life, not one burdened by Batman. He shares that he has already recorded his final message to the family. He tells her that he chose this moment, this moment to die. Kate understands what he is saying and reluctantly draws her weapon. She shares that she is grateful to be part of the family.

(Present) Tim screams out that this cannot be happening. He realizes that future Tim never knew of the truth, that his whole crusade was built on a lie. Steph shares that Brother Eye deleted Bruce’s final message before the family could view it. Ulysses chimes in that Brother Eye was right to cause the division. Brother Eye pushed Tim further into the darkness, and that is how he became his future self. The hopeful, idealistic boy grew up to become a hardened, bitter Batman who finally ended crime. Steph speaks up and says Tim did those things not knowing the real truth. She tells Tim that he is now in control of this situation: he can either stay with the programming of Brother Eye or he can come back to the truth.

Tim shuts down Brother Eye and the people controlled by the OMACs start to regain their lives back. Steph, after deactivating the system, runs into the command center and swiftly takes out Ulysses. Bruce apologizes to Steph for everything that has happened between them. She shares that although they will never see eye to eye exactly, she very much so respects the Bat symbol because she knows just how powerful it truly is. After that heart-to-heart, Bruce tells all members of the Colony to help get people out of the Belfry, because the building is about to collapse.

Kate asks Tim if he is okay. He shares that he was holding on to a child’s dream, a perfect crime-fighting system that will bring Gotham into the light. But, he realized that his dream became weaponized to control Gotham and incite terror. He is distraught that he became the villain that he wanted to save Gotham from. Kate also agrees that she does not want to become her future self either; her path leads her to shoot Bruce. Kate tells him that it is time to let old dreams die and pursue new ones.

Bruce shares that Jacob has been re-instated into the military with the assurance of the President that the Colony is permanently disbanded. Kate reassures him that she has not or never will have any anything to do with that organization. She shares that she has always let others shape her mission; it is time that she shapes her own. Bruce asks what her plans are, and she shares that she is not quite sure what her future holds. Bruce asks if she will wear the Bat when she goes out into the field. He goes on to say that they will from time to time have disagreements, but they are family. He wants to be part of her life, but he cannot dictate those terms. All he can he do is support her and be there for her when she calls.

At Thompkins Free Clinic, Leslie is happy that Cass has decided to move in and become better “at person things.” Leslie says that an old friend has volunteered to tutor her because she has a long ways to go before she can even think about entering high school. Barbara (Batgirl) tells Cass that she is excited to tutor her. She shares that she knows where they need to start their focus: Cass’s verbal skills. Barbara states that in a few months, Cass will be at the point to quote Shakespeare. Right on cue, Cass shares one of the passages she learned with Basil. She asks Barbara if she did well, and Basil, watching from the outside, says she was great. He leaves a note for her on the door and gets in the car with Dr. October.

At Wayne Manor, Bruce helps Tim load his stuff into the car. Bruce tells him that it is hard to go off to university and forge your own path. He tells Tim that he is always a phone call away. Tim enters the car and Steph asks if he still plans to not go to Ivy University. He tells her that he has so many questions about the diverging timelines, and now he has the time to study those things without the responsibility of being a hero.

Analysis: What a way to end this run!

This is a great issue in and of itself. But, I want to look at the long-term impact of Tynion’s run.

Tynion’s run brought back the importance of the complete Bat-Family. As of late, the Bat-Family has only been in issues where they are upset with Bruce. And until Tynion’s “Batman and Robin Eternal”, the other members of the Bat-Family besides Dick, Barbara, Jason, Tim, and Damien were forgotten.

Rebirth was about fixing the timeline and remembering the long history of characters and events pre-New 52 and reconciling them with the New 52 universe. Tynion has done this better than other writers in my opinion.

I could go on longer about how Tynion’s run has been amazing, but I believe his work speaks for itself.

I can add that every issue during his run has had incredible art. The art team in this issue of Eddy Barrows, Eber Ferreira, Adriano Lucas, and Sal Cipriano created an issue that was bold, beautiful, complex, and was in perfect harmony with Tynion’s script.