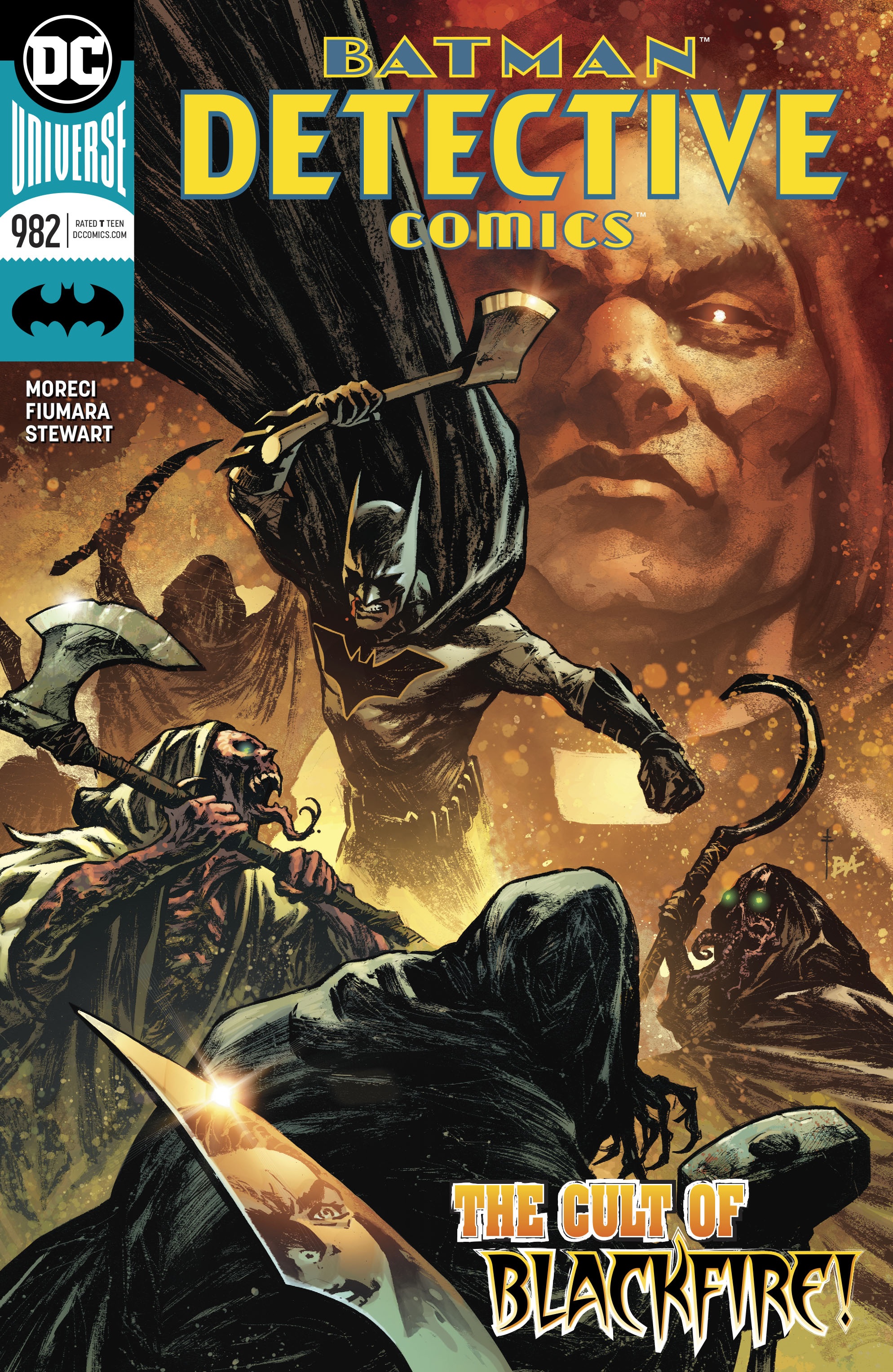 Overview: Bruce saves a boy from a cult led by Deacon Blackfire.

Synopsis (spoilers ahead): We open with a disheveled man suspended upside down in a Gotham sewer with Bruce interrogating him about where the boy (Joshua) is. All the while, Bruce contemplates that he could have been this man. He could have been desperate and homeless. He could have let himself go to be one of Gotham’s forgotten. Due to his parents’ deaths, he could have quit on life, but instead, he forged himself into a weapon. Instead of falling into the life of a broken man, he arose as Batman.

Bruce talks about Gotham’s redemption plan and others opinions on how to bring Gotham out of the shadows. Some suggest that Gotham should consume itself. There are many individuals and groups who want to speed up Gotham’s downward spiral and seize what is left when Gotham crumbles. Bruce realizes that this man is a member of a cult that wants to let Gotham fall and take over.

Walking in the sewers, Bruce is attacked by a fanatic. While unable to move, Deacon Blackfire passes through him from behind and manifests himself before Bruce. Deacon flaunts that Batman has nowhere to escape. Little does Bruce know that Deacon compromised him.

Bruce recounts that the Spectre obliterated Deacon from this plane of existence. This worries Bruce because if he can reconstitute himself after the Spectre’s punishment, then Deacon is a serious force. He is now more dangerous than he ever was.

Deacon shares that Gotham is cursed. He argues that Bruce has for years fought against crime and corruption only to never win the war. Gotham is destined for darkness and mayhem, and Deacon asks if he is willing to join sides with him and embrace the madness. Bruce, like every good hero, tells Deacon that he will never relent, and the city will never be his to command.

Deacon tells Bruce that he and his acolytes will take Gotham and will eliminate Bruce. He also shares that Bruce should be feeling Deacon’s effects stronger now. He tells Bruce that soon he will be under Deacon’s total control. Bruce tries to fight, but he is quickly defeated and left to rot in the sewers.

Bruce wakes up and sees a world on fire. Bruce knows that this destruction is due to Deacon. Although he is discombobulated with this “Gotham,” he knows that Batman is needed.

In the streets, an adult Joshua raises his ax and declares that Gotham has worshiped a false god, Batman, for far too long. He tells the masses that the hour is at hand and their future is in their grip; they can take back their city from Batman. As Joshua swings his ax down onto the Bat-signal, Bruce stops him. He tells Joshua that he will not win today, and Joshua retorts that he is outnumbered. At that moment, the mob surrounds and attacks Bruce. While being beaten, Bruce calls out for Robin.

Back at the sewers, a voice from the shadows calls out to Bruce to wake up. Bruce realizes he is not alone when he sees Dick, Barbara, Duke, and Damian. They encourage him to get up and fight. They tell him that he has never let them down. They tell him Deacon is wrong because Bruce has made each and every one of their lives better.

With their support, Bruce gets up to complete his mission of saving the boy. Dick tells Bruce to “remember Gotham and every inch of it.” He remembers that the sewer system had renovations scheduled but was abandoned years ago, yet the wall in front of him is new. He punches through the wall and arrives at where Joshua is held. Bruce uses a flashbang to blind Deacon’s followers, and he quickly incapacitates them. With Deacon’s forces now disabled, he does not have the necessary strength to take over Joshua’s body. Thus, with no power source, Deacon’s incorporeal form fades away.

Now safe, Bruce and Joshua await for his parents to arrive by watching the sunrise on the roof of a skyscraper.

Analysis: I really enjoyed this issue.

Sometimes during the transition from one creative team to the next, there might be a few issues that neither will write due to contractual or other business reasons. So, they have temporary creative teams to do those fill-in stories. Sometimes these types of stories are usually mediocre. Thus for a fill-in issue, it actually surprised me with how good this story was.

Now, the real question is: just who is Deacon Blackfire? Well, in the New 52, he was an evangelist in Gotham for the poor, and he used his following to create a cult. As the cult’s leader, he manipulated his followers to take over Gotham for himself.

So, basically, Deacon Blackfire is a clone of Brother Blood.

Anyways, during “Batman Eternal,” Deacon tries to con the Spectre into resurrecting himself. The Spectre realizes Deacon’s machinations and obliterates his spirit. The Spectre is the physical embodiment of God’s Vengeance; hence, he is one not to be trifled with. Thus, it is most impressive that Deacon reconstituted himself.

The writer, Michael Moreci, graduated from DC’s Writers Workshop Class in 2016. I cannot believe a guy writing comics for two years can put out content like this. He nailed Batman. He completely understood the voice of Bruce and what makes him tick. I often have issues with non-metahumans engaging with spiritual and magical entities (just watch Arrow Season 4…you will understand), but he wrote Deacon Blackfire in a way that was believable. Bruce was stopping his astral form from taking over a new host body, not engaging Deacon directly. I appreciated how Moreci kept this story grounded.

I also appreciate the spiritual battle that he proposes. Bruce, for all of his will, has tried to reform Gotham. From being Batman to his philanthropy via the Wayne Foundation, Bruce has given his all to save the city that he loves so dearly. But, it seems that no matter what he does, Gotham is not for the better. This is the “curse” that Deacon is referring to. Thus, Bruce is at a crossroads: does he keep fighting or accept where things are?

This reminds me of the mythical Sisyphus. Sisyphus was the king of Corinth who was punished by the Greek pantheon for his deceitfulness by being forced for eternity to push a boulder up a hill only for it to roll back down when it reaches the top. Bruce dedicates his body and resources to his war on crime, only to see the city slip back into darkness after he has taken a villain off the streets. This continuing pattern seriously affects a person’s psyche.

But, Bruce accepts that his crusade is a Sisyphean one. If he can just save a life, then his purpose is validated. He went through all of Deacon’s mayhem to save one innocent boy. Some may say Bruce has a death wish, but his stubborn pursuit of justice is what makes him a hero.

The art in this issue is incredible. Sebastian Fiumara was an artist featured in Snyder’s “All-Star Batman.” He did the cover, pencils, and inks for this issue himself, and he did a wonderful job. I feel that he has a bright future and I would love to see him on more Bat-books. His art has this grittiness that meshes well with Batman.

Final Thoughts: I had a great time reading this issue. Between the story and the art, I have no complaints. I am, however, looking forward to Bryan Hill’s run starting in #983.