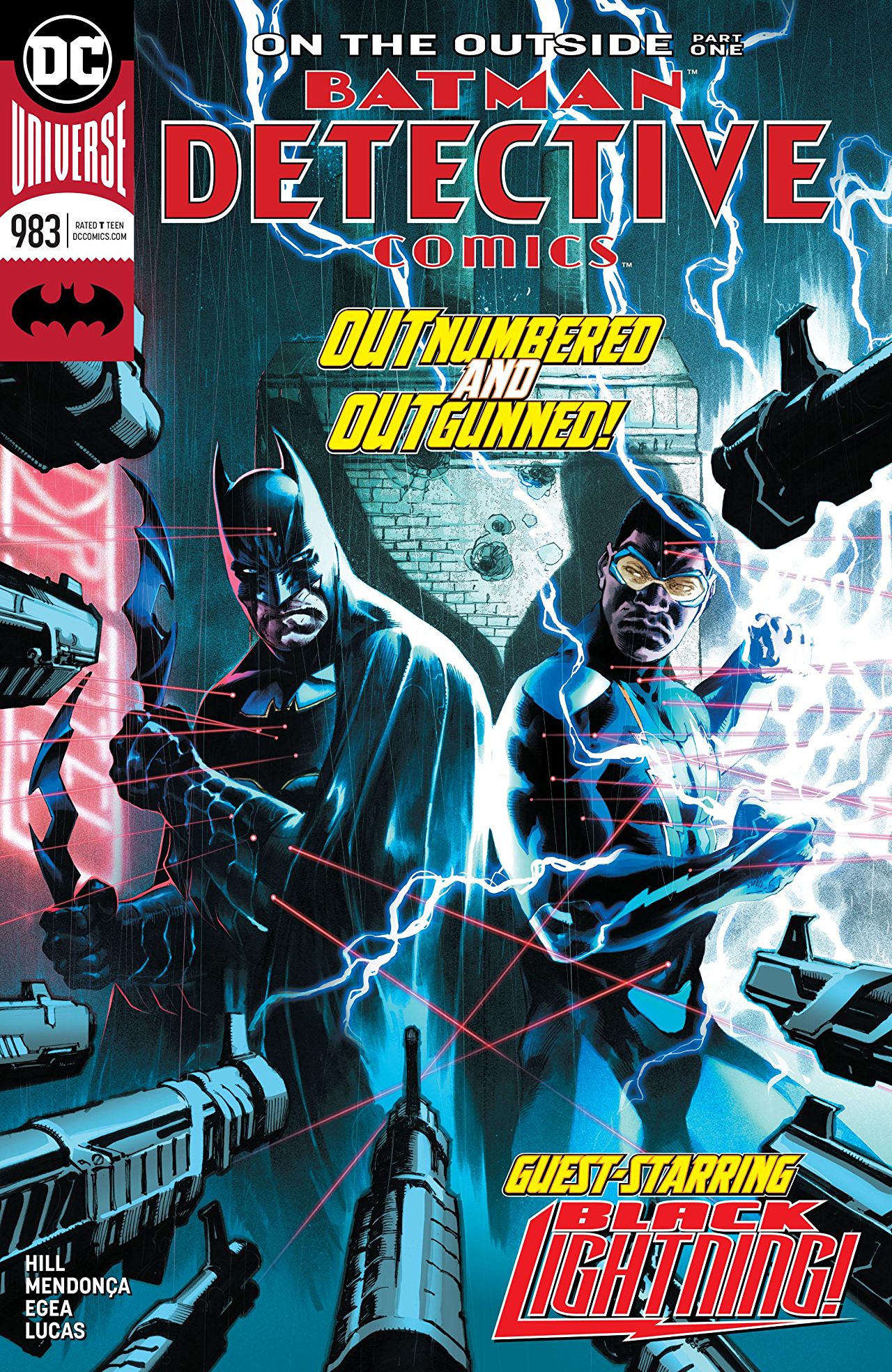 Synopsis (spoilers ahead): Darin Griffith, a 16-year-old Viewtube star and self-proclaimed “biggest Batman fan in the world,” is on the local news channel giving an interview. He admits to the news anchor that he has never met Batman, but he might have met him once. She asks him why he loves Batman so much. Darin responds that his Viewtube channel is a place to share stories of how Batman means to different people. He shares that Batman has been and is a source of light in dark times.

One week later, Duke Thomas – The Signal, enters an apartment and sees Darin restrained and unconscious. He hurriedly tries to free him but is interrupted by a masked man telling him that he is making Batman weaker. Before Duke can respond, this stranger blows up the apartment, and Duke is thrown violently out of the place and lands on top of a vehicle below. Duke is rushed to the Batcave where Alfred and Bruce stabilize him.

Later outside the Manor, Bruce sternly tells the Martian Manhunter (J’onn J’onzz) that he specifically called Clark. J’onn shares that Clark is preoccupied but that he is more than willing to relay any message he has to Clark. Bruce shares that he is going forward with his team initiative, thus he has business in Gotham. J’onn quickly realizes that Bruce wants to enlist the aid of Jefferson Pierce (AKA Black Lightning). Bruce warns that although the League will be aware of his decisions, he must have his team outside the influence of the League – he needs his team working his way.

Bruce comes back to the Batcave to check on Duke. Alfred shares that his suit took most of the punishment, but he has severe internal injuries. Alfred also shares that in Duke’s wounds, he seemed to find a data drive. Bruce asks him to look into the matter. After Alfred left, Duke whispers that the man said that “we make him weaker.”

In Metropolis, Jefferson is in the process of stopping a hostage situation. Throughout the negotiations, he thinks back on his mission statement. Although he is no Superman, his job is nevertheless still important. As a high school principal, he is able to help the kids who fall through the cracks. So often without support and direction, the washed out students enter into a life of crime. He helps people create lives instead of destroying them with violence. In the end, he is able to free the girl from her attacker. In retaliation, the man arms a grenade; however, Jefferson is able to create and hold a force field around the assailant so that the explosion would be contained inside, and he and the girl will be unharmed.

Back in his office, Jefferson is working on how to have his suit increase his own powers. Amongst the shadows, Bruce shares that that girl owes her life to him, and that the madman chose his own fate. Jefferson immediately knows that that is Batman speaking. Solemnly, Jefferson admits that although he saved the girl, Batman would have been able to save both the girl and the attacker.

Back in Gotham, Bruce is on his nightly patrol. Alfred calls to let him know that the data drive contained no malware and just an audio file. He then patches the audio feed into Bruce’s cowl. This unknown assailant begins a monologue stating that his own actions probably made Batman angry, but it was karma. He shares that he is what happens when good men lose their way. He shares that Batman was once a symbol, but now a novelty. He addresses Bruce directly and shares that he has ruined Batman and his legacy. He claims that he will save Bruce now.

Elsewhere, Cassandra calls Alfred and says that she wants to see Duke. Despite his advice, Cassandra is going to check on him anyway. Behind her in the street, there is an explosion. Using the explosion as a diversion, the mysterious assailant gets the drop on Cassandra.

Analysis: I have never read any of Bryan Hill’s work, but I will start! He has written 13 comics for DC and 2 for Marvel. However, most of his work has been for Image Comics. I want DC to keep him around for more than just this Detective run.

As a setup issue, it blew my expectations. I find that the plot is engaging and paced extremely well. Sometimes, the first issue can be a bit of a bore, but this issue really hit the ground running.

Something Jefferson said struck me. He said, “Welcome to the Metropolis that the rest of Metropolis forgets.” Often, we view the heroes and their stories. We see Bruce taking on the Joker, Clark stopping Zod, and Diana fighting Cheetah – and we just accept those stories. We forget what happens in the world outside the heroes. Jefferson, although he is a hero, is very grounded in the world. Even in a bright and shiny Metropolis, there is still a lot of darkness; there are still people who have been forgotten and suffer. The most well known DC hero who looks after the common folk is Green Arrow. Even still, he is a white male and a billionaire. Despite even his efforts and convictions, he still is not able to have the type of influence that Jefferson has. What makes Jefferson Piece interesting is that he is the personification of everyday heroes. He is the principal that helps a troubled youth. He is that single mother that does everything she can to give her kids that better life. He is that Alcoholics Anonymous leader that checks in on his group and makes sure they stay sober.

I think that his pairing with Bruce Wayne will be an interesting dichotomy. Bruce is all about stopping crime and bringing justice, but with his wealth and fists. Jefferson Pierce wants has the same goals, but he uses his position as a principal and his time to meet and help people where they are at; if that strategy does not work, then he uses his fists. Because Jefferson is a more grounded individual, I think he would be an excellent teacher to Bruce’s talented young wards. Some people can teach, and some cannot. Bruce is a great leader and inspiration, but a teacher he is not. Jefferson knows how to reach students.

The art by Miguel Mendonça is beautiful. The art, since Rebirth, of Detective Comics is consistently some of the best out of all the DC titles. The page I liked the most was the one of the Viewtube star’s mom being interviewed on the news network. Now, as you see this scene, you are viewing as you would from a television. You can tell that someone (the new mysterious villain) has gotten angry and thrown something at the screen because each panel has cracks. Also, the coloring reflects that there is a serious issue with the underlying electronics. It is one of the most interesting and innovative pages I have seen in a long time.

Final Thoughts: Great start. I cannot wait for the next issue.