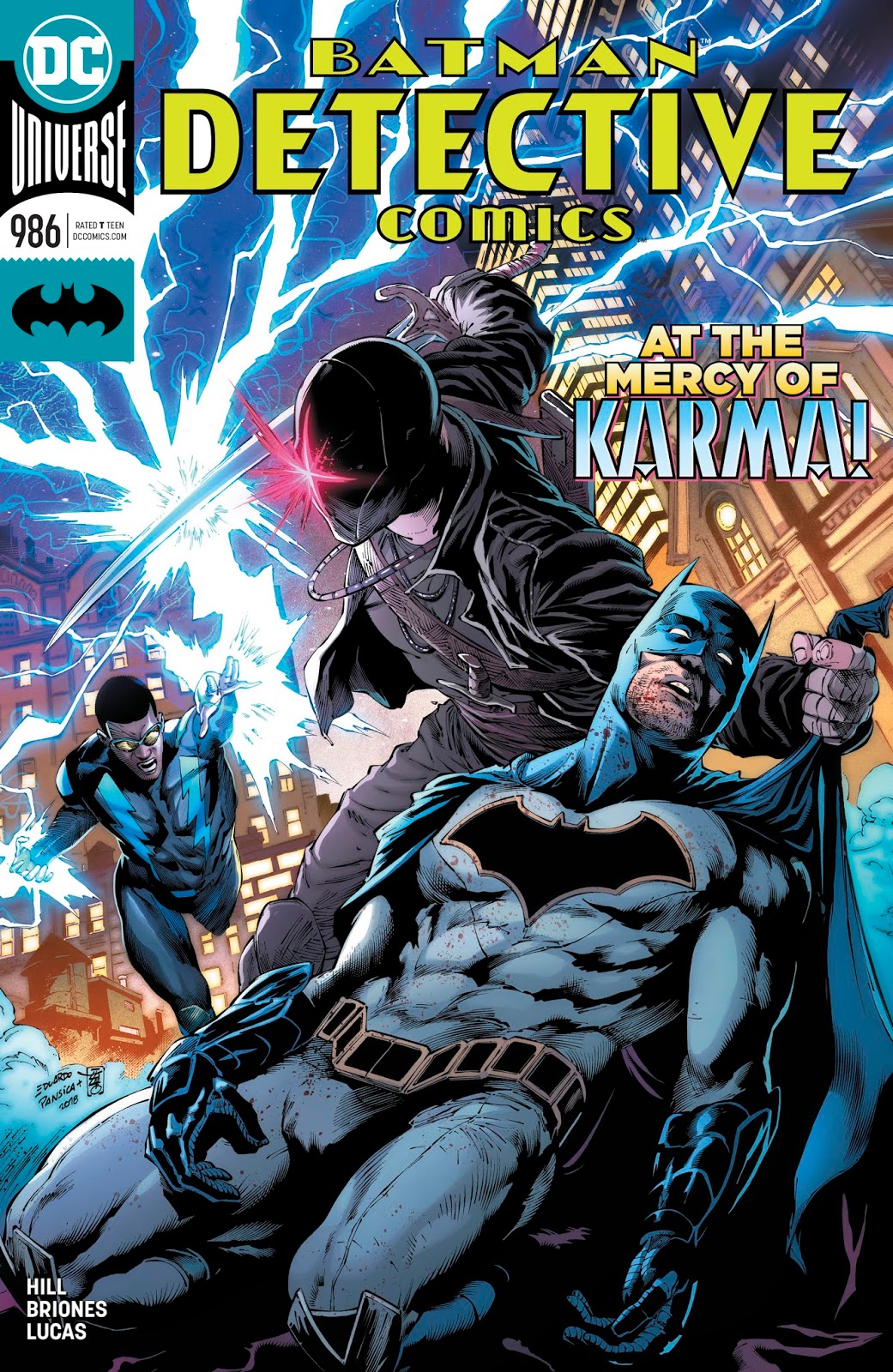 Overview: Cassandra and Jefferson save the kidnapped children, while Bruce confronts Karma.

Synopsis (spoilers ahead): On the Gotham News Network, the colleague of the murdered news anchor, Katherine Kistner (see the last issue), asks where Batman is. The deadline Karma set to blow up the kidnapped school children is in two hours. Batman must act now to save the children.

Bruce, while readying his cowl, tells Alfred to put the signal breaker online. He says those parents must know Batman is out there trying to save their kids. At once, Alfred turns on this protocol, and all the media screens in Gotham display the bat-signal.

At the penthouse, Jefferson asks Barbara to get Cassandra so they can make a plan to save those kids. Barbara states Cassandra has already left under her orders. She tells him with Duke still recovering from injuries, they need to help Bruce. He reiterates he is in charge, and she cannot break the rules at whim because she disagrees. He tells her to stay in the penthouse while he suits up to provide support to Bruce and Cassandra.

Cassandra enters the church where the kidnapped children are and immediately runs into Bruce. Instead of chastising her, he debriefs her on the situation. Karma has a bomb rigged to the children. He blocked all wireless transmissions in the area in case Karma has a remote detonator. Bruce needs her to save the children while he goes after Karma. His last advice to Cassandra is, “Follow the Light.”

Cassandra drops into the room where the children are, and she immediately removes her mask to reassure the kids that all will be well.

Bruce runs into Karma and addresses him by his real name – Fleet Delmar. He warns that Delmar should have stayed in Markovia. Delmar responds he wants Bruce to see all the suffering he caused. He removes his mask and reveals his disfigured, scarred face. He tells Bruce the bats took out his eyes, the gas took his mind, and Bruce took his life. After this declaration, he attacks Bruce with his sword.

Cassandra looks at the bomb and is unnerved because she does not know how to defuse the bomb. She repeats what Bruce said – “Follow the Light”, but is unsure which light on the bomb to follow. She understands if she cuts any wires, the bomb will explode, and if she frees the children, the bomb will still explode. Jefferson calmly tells her that he will contain the blast, but she must move swiftly to free the children. She cuts all the ropes off the children and hurriedly leads them to safety. All the while, Jefferson is doing his best to control the explosion. He recognizes he cannot contain the blast much longer and calls for Bruce to evacuate.

During this entire time, Bruce is brutally beaten by Delmar. While Bruce is trying to get his breath after being beaten to his knees, Delmar taunts that he was planning to kill all the children, but now he is going to keep Cassandra to himself because he sees that rage inside her. Bruce, thinking many racing thoughts at once, distracts Delmar and plunges a batarang into his shoulder. Delmar amusingly questions if that is his best plan, to just stab him. Bruce activates the thrusters on the batarang, sending Delmar far away from the church.

Back at the cave, Bruce warns Cassandra and Barbara, “When Jefferson speaks, he speaks for me.” Barbara storms off in disagreement. Cassandra tells Jefferson to let her leave, and Bruce comments that her anger will subside soon.

As Bruce leaves the huddle, Jefferson tells him that twice now Delmar has defeated him head-on. (I know technically Bruce won this fight, but without the thruster, he would have been killed.) Bruce responds he has learned now what skills he needs to beat this adversary, and he knows the right teacher for this situation, Katana.

Analysis: I am not sure how I feel about this issue.

Let me start with the positives: Bryan Hill keeps delivering great dialogue. He truly has a grasp on these characters, and it just feels natural. Delmar is a much more interesting villain that I first thought he was. He is like the First Victim – but even darker and more violent.

However, I feel that the story has begun to repeat itself. What I mean is, we had Bruce fight Delmar before, and he was beaten badly. After that, he went on a quest to learn Delmar’s identity. In this issue, we had Bruce beaten soundly again and realizes he needs to learn more stuff. It seems the story is treading water and not going anywhere.

So, I like the issue, but I also do not.

However, I am very intrigued with what Bruce needs to learn from Katana. I have no guesses or hypotheses about why she is there.

About the art: It is once again fantastic. Philippe Briones art is spectacular. I am extremely impressed with how he drew all the characters faces. I also like the colors used by Adriano Lucas. Overall, great art – which is not surprising for Detective Comics.

Final Thoughts: I like and dislike this issue. Hopefully, Hill will get the story moving along in the forthcoming issue.