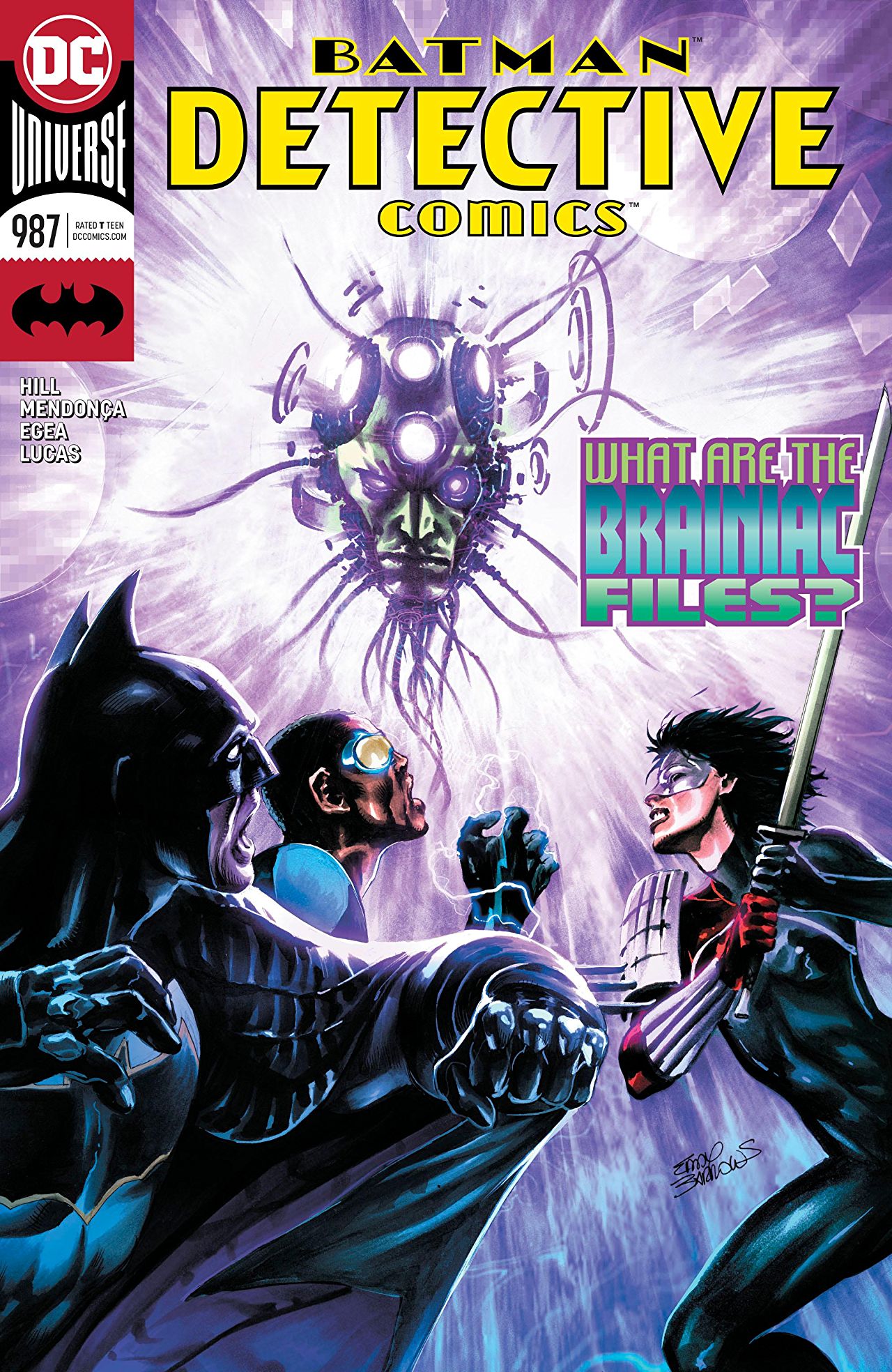 Overview: “On the Outside” concludes with a bang, and looks forward to the future!

Synopsis (spoilers ahead): At Wayne Enterprises in Gotham, a security guard named Fred is taken hostage and his colleague Hank murdered by Karma’s mercenaries. Karma tells them that he will pay a hundred thousand dollars per head for Batman’s sidekicks.

In the Batcave, Batman shows Jefferson, Cass, Duke, and Katana a holograph of Martina Dementieva, a Markovian weapons dealer who sold Karma his alien technology. He tells the four – Black Lightning, Katana, Signal, and Orphan, that he wants them to become a team which can douse threats like Dementieva all over the globe. Alfred alerts the team of the situation at Wayne Enterprises. Duke says he can track Karma, even though he can’t fight him, while Bruce vows that his employee Fred won’t die tonight. Cass and Jefferson insist that they help, even though Batman says that he must face Karma alone.

The mercenaries, getting bored after thirty minutes, are about to slaughter Fred when Black Lightning and the team blast through the doors. Cass and Katana take the mercs down hard, while Duke helps Fred up. Batman insists that Katana use non-lethal actions, and then follows Duke’s tracking of Karma upstairs. Black Lightning tries to persuade Batman that he needs the team to take Karma down, but Batman says he needs to prove that Karma is wrong – that the sidekicks don’t make him weaker. Jefferson responds by keeping the team back, and telling Bruce he doesn’t have to prove anything – just beat Karma. Katana tells Batman to overwhelm Karma’s telepathy with things he will fear.

As Batman faces off against Karma alone, he lures the villain deeper and deeper into his thoughts, then blasts all of his deepest, most traumatic memories at once – the death of his parents, the loss of Catwoman, Two-Face, Joker murdering Jason, Bane, Ra’s, and above all, the bats. Batman strikes the incapacitated Karma, ripping his helmet off, and vowing the learn to heal his mind so he can learn everything about Markovia.

In Metropolis, Jefferson says goodbye to Bruce, agreeing to be the leader of the new team (though his own city and school come first). He then tells Bruce that what happened to his parents wasn’t his fault. Bruce seems to ignore this gesture, telling Jefferson that the team is called the Outsiders. As Bruce drives off, Superman flies down, telling him that he should help Bruce, but not become him.

In Markovia, a villain yells at Dementieva, who obliterates him with her laser eye, then tells a shadowy figure to activate Roderick, so they can kill prey together.

Analysis: Bryan Hill’s first arc in the mainstream DC Universe comes to an explosive and open conclusion. The immediate threat of Karma is stopped, and Batman’s confidence in himself and his family restored, but the global threat of Markovia and many others hint at the long-promised “Outsiders” series. Though as of this week, November’s solicited titles have been seen with no sign of an Outsiders title, the final text of the book promises “To be continued…very, very soon!”

Hill provides clean, evocative writing. An example appears in Karma’s reference to the other Bat-Family members – “the little red boy? The yellow boy. The purple and gold girl? The pretty lady with the red hair.” The elegance of the dialogue, the clarity of referring to Tim Drake, Duke Thomas, Stephanie Brown, and Kate Kane shows that Hill’s spent a lot of time working on his voice skills. There are some structural problems – after getting blown up in the first issue, Duke doesn’t really do that much to prove his heroism, though Hill does use his ability to track Karma. That could have been accomplished by using camera footage or deduction, so Hill could have made it more efficient by saying that Duke saved Batman time and possibly lives by allowing him to confront Karma sooner, but it’s a minor issue. The makeup of the new Outsiders – Black Lightning, Cassandra Cain (Orphan), Katana, and Signal – promises old and new faces, and with Hill’s clear passion for Jefferson and Cass, the book will hopefully match classic runs of the title.

Miguel Mendonca and Diana Egea provide the final linework for this issue, returning after two issues by Phillipe Briones. Both Mendonca and Briones have a real gift for clean lines and appealing faces, though their compositions are often not quite as polished or assured as the previous main art teams for Detective Comics, Eddy Barrows and Alvaro Martinez. Adriano Lucas provides vivid but carefully controlled colors, not over-rendering, but providing clean spaces of color and strong shadows, as is appropriate for a Batman book. One possible misstep in coloring comes in Batman’s visions with which he overwhelms Karma – the image of a boy embracing a blonde woman seems likely to have been intended to be Martha Wayne, given the pearl jewelry featured. (One hopes that DC will stop the double shipping of so many of their titles in the next year, and allow art teams to become more standardized and not so reliant on constant rotation and fill-in work – but since they’re reinstating Nightwing as a double-shipping book in the next few months, it doesn’t look promising.)

On the whole, the five issues of “On the Outside” have been vigorous, with great character moments and solid art. Hopefully the promise of seeing Hill handle these characters “very very soon” will indeed be true!

Final Thoughts: The newly formed Outsiders prove their worth, and look forward to stopping global threats for Batman soon.