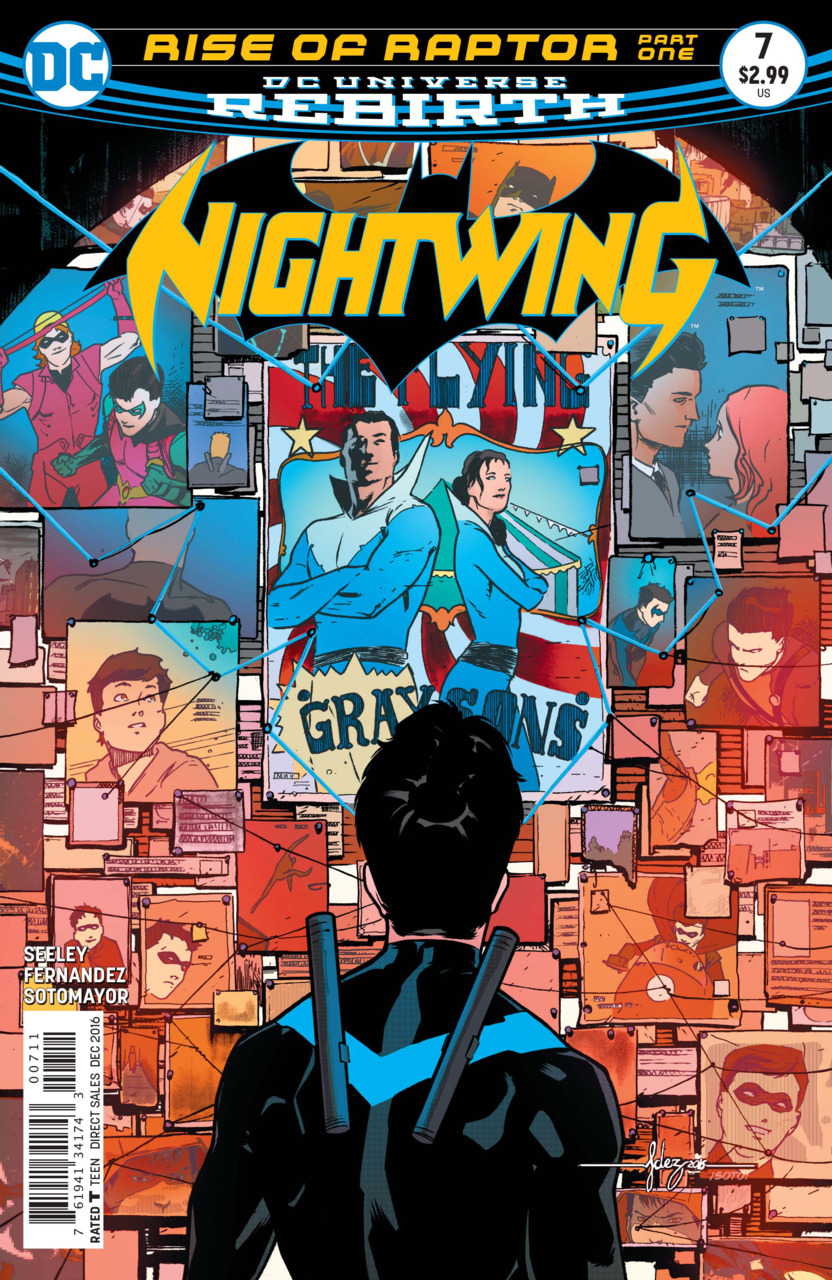 Rebounding out of the Night of the Monster Men event, Nightwing #7 quickly finds it’s feet and this issue is among my favorite in the series to this point.

The issues begins in Sydney, Australia where Spyral are wrapping up a bust of the Parliament of Owls. Insert a pretty forced mention by a Spyral member to Nightwing about Tim Drake’s supposed “death” and the overall Monster Men event – thankfully we can turn the page and move on. I always feel slightly sorry for writers when events intrude into the heart of their books with no real net story gain as has happened here – I completely understand the trade off is increased sales and exposure and this is the nature of the beast. That doesn’t mean I always enjoy the beast.

Moving on, the bust turns rapidly bad (and slightly confusing) as a suicide member of Kobra kills all the Owls (very quickly, at what must be almost flash-like levels of speed) and they are, as Nightwing says, all dead. He quickly finds out that Kobra was sold the details of the Owl’s location by none other than Raptor which makes Dick rather grumpy and he’s straight off to Turkey to confront Raptor! Nightwing really must be clocking up the frequent flyer miles by this point.

The centerpiece of the action in this issue is then the confrontation between Nightwing and Raptor – without wanting to disclose excessive spoilers it’s clear that Raptor has long had some sort of unhealthy obsession with Dick Grayson even from his days in the circus, prior to the tragic events that led Dick Grayson to become a ward of Bruce Wayne and to of course become the first Robin.

The fight takes place over several pages and the artwork is again gritty and fluid. I was very impressed by the double page spread just prior to the fight that shows a log-line of Raptor’s obsession with Dick Grayson. We him in the circus as a member of the Flying Graysons, as Nightwing, in both the blue costume and the red and black, (sadly no disco suit on display, always my favorite) and also as Robin with Batman. There is no secret identity between the two of them – Raptor’s obsession is another pair of eyes on the exact same career, touched with more than a dose of envy and anger.

The fight between the two characters is well drawn, gritty and a touch brutal, this isn’t a clean fight between perfect super humans where nobody gets hurt. These two fight to wound and to win. In the grand tradition of comic storytelling, there is a fair amount of vocalizing between gut punches – Raptor is a touch more brutal, a bit hungrier, a little tougher and he edges the fight although Nightwing does go down swinging. Maybe he has jet lag from all this flying.

Flash to Bruce at Wayne Manor and suddenly up pops Raptor, who dramatically increases the story stakes by kidnapping Bruce Wayne at a press conference (after lobbing a “One Percenter” hardball question at him, which Bruce has some difficulty extricating himself from) trusting that Bruce will stay “on brand” and not reveal his superior fighting skills. This is a tough one for many a Batman fan – it’s hard to see Batman not being able to disable such a wannabe as Raptor and frankly I wouldn’t mind seeing Bruce dispatch some swift justice. But this isn’t Batman we are reviewing and certainly there is a fine tradition in Batman media of Bruce being a bit of a patsy when the situation demands it.

I enjoyed the character interaction between Nightwing and Raptor, showing their fragile alliance is already over, at least for now. Nightwing is seeing the consequences of trusting the devil to get the job done. He will get it done, but his way, not yours, and he will have his pound of flesh. The fight and the rupturing of their alliance is the centerpiece of the story, but I also enjoyed the flashes to the Manor, where we see Alfred and Bruce discussing Dick Grayson. Bruce isn’t shown as the cold-hearted almost mechanical persona we perhaps too often see, but a human capable of a level of reflection and regret over how he has distanced himself from Nightwing. My believability meter that Damian would just stay at home after Bruce is kidnapped is stretched in the final sequence, but I understand this is all per story requirements, and after all, we are in Nightwing’s book.

Overall, a strong solid issue setting up the new story arc. I look forward to Part 2!