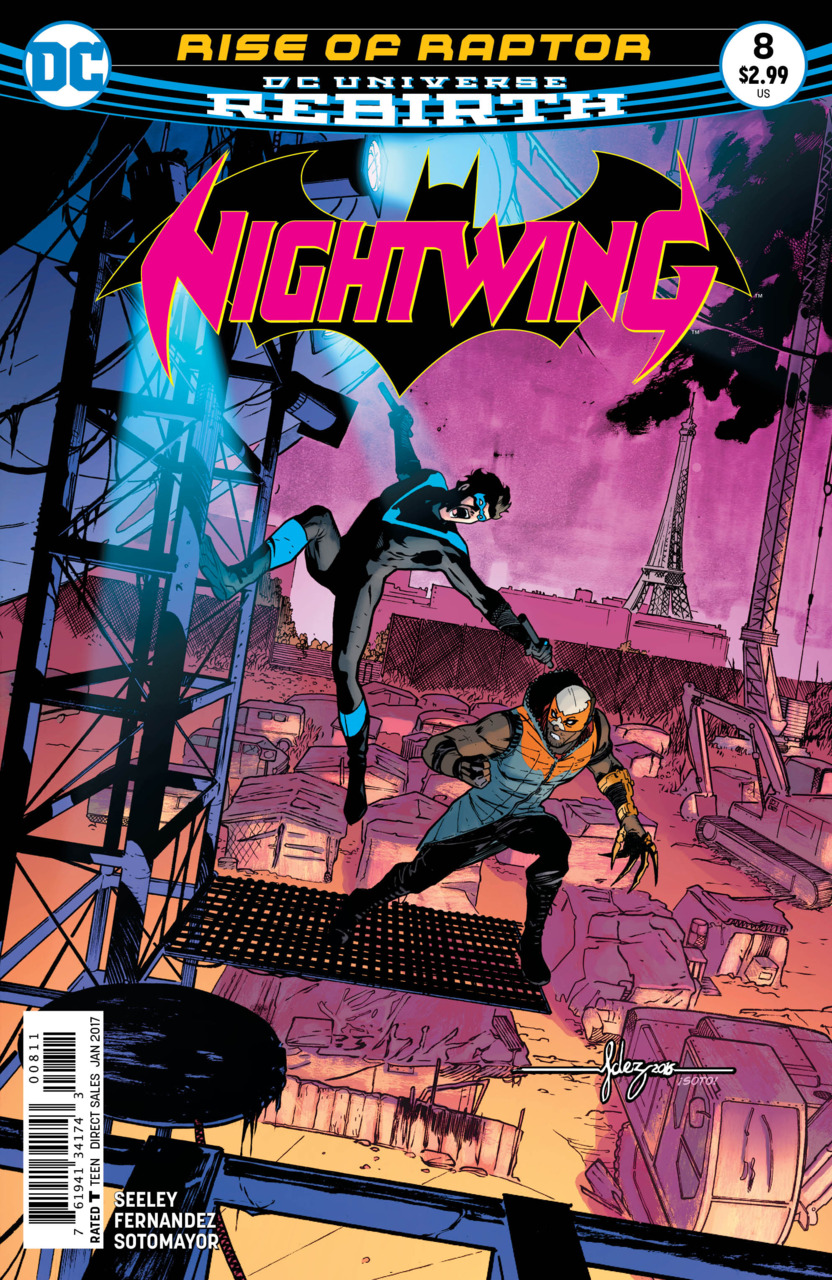 Nightwing #8 kicks off with us following the threads of the Raptor storyline, who has apparently been stalking Nightwing his whole life – which extends back to the days of the circus. This is an intriguing twist which I certainly did not see coming! The start of the issue shows a flashback with Raptor described as a BIRD OF PREY. It seems unlikely that isn’t going to connect in some manner with a Birds of Prey spinoff title, but this reviewer could be wrong!

Cut straight to Nightwing on his cool motorbike with his whole custom made helmet (he certainly has re-embraced the blue-and-black costume motif) on his way to try and rescue Bruce Wayne and despite knowing he could “call every super-friend he has”, this one is personal. This is about family. And stalkers.

For those of us, like myself, who find it pretty hard to believe Batman can’t beat Raptor to within an inch of his life, we have to endure Raptor ranting at Bruce Wayne for taking Dick Grayson away from the circus. At this point I’m confused, as I always thought Bruce Wayne rescued and raised Dick after the incident at the circus when his parents were killed, so it’s hard to frankly take Raptor that seriously with his whining. And just in time, in comes Nightwing with a hefty blow to the face that evens the odds and makes fans of Batman and Nightwing feel a lot better. Raptor continues his 1% rant and in response, Dick absolutely pounds him with a pretty cool knee to the face.

At this point it should be noted that the art is suitably grimy and gritty and fitting for this action piece. This is a low-down  “boys club, fight club” kind of fight. We find out Raptor has or had leprosy which has only added to his list of woes – he’s making a serious case about third world inequality, but to my mind, he’s making it to the wrong people – Bruce Wayne with his charities and foundation have surely saved thousands of lives, if not more, potentially in the millions one would think, given how expansive and generous Wayne Enterprises is. I don’t have any real issues with these statements, but they clearly come from an unbalanced person.

The story is sad in fact, as Raptor knew and worshiped Nightwing’s mother, prior to her death, and then doubtless felt abandoned in her passing. It’s a retcon and a half, but I guess this is an effective in into Nightwing’s personal story. There is a beautiful piece of art where Nightwing catches Bruce as he plunges out of this odd death chair Raptor had him imprisoned in. All in all, I can say with quiet confidence I absolutely loathe Raptor. There’s a cool little reveal at the end of the issue which put a smile on my face after what feels like a pretty traumatic story event and arc.

This is another good issue of Nightwing. I feel it is time to probably examine more closely the arc of this run so far. The art is gritty and solid along with a story that packed an equal punch. Bruce played as very depowered and in distress this issue which was an interesting turn of events – my prior exposure to Batman in Nightwing series has been with him more as a domineering or almost brusque figure, often not really seeking or invited to being a partner, in direct contrast to obviously their earlier incarnations as the classic Batman and Robin. I found myself worried for Bruce’s fate where normally that same level of worry is nullified mostly because he’s Batman.

Whilst I am getting worn out by just how “gritty” this Nightwing run appears to be, I feel this is the stylistic choice that DC is going with for now and we may be stuck with that for now. I can only praise the consistency of the style, but I would hope that we do see more light coming into this comic book and Nightwing’s life. Another solid issue but I can only give this one a 3.5 as I felt the down-beat nature of proceedings and a fairly easy end fight meant my enjoyment was definitely tempered. Let’s hope Raptor stays locked up for now and we can have some fresh Nightwing stories!