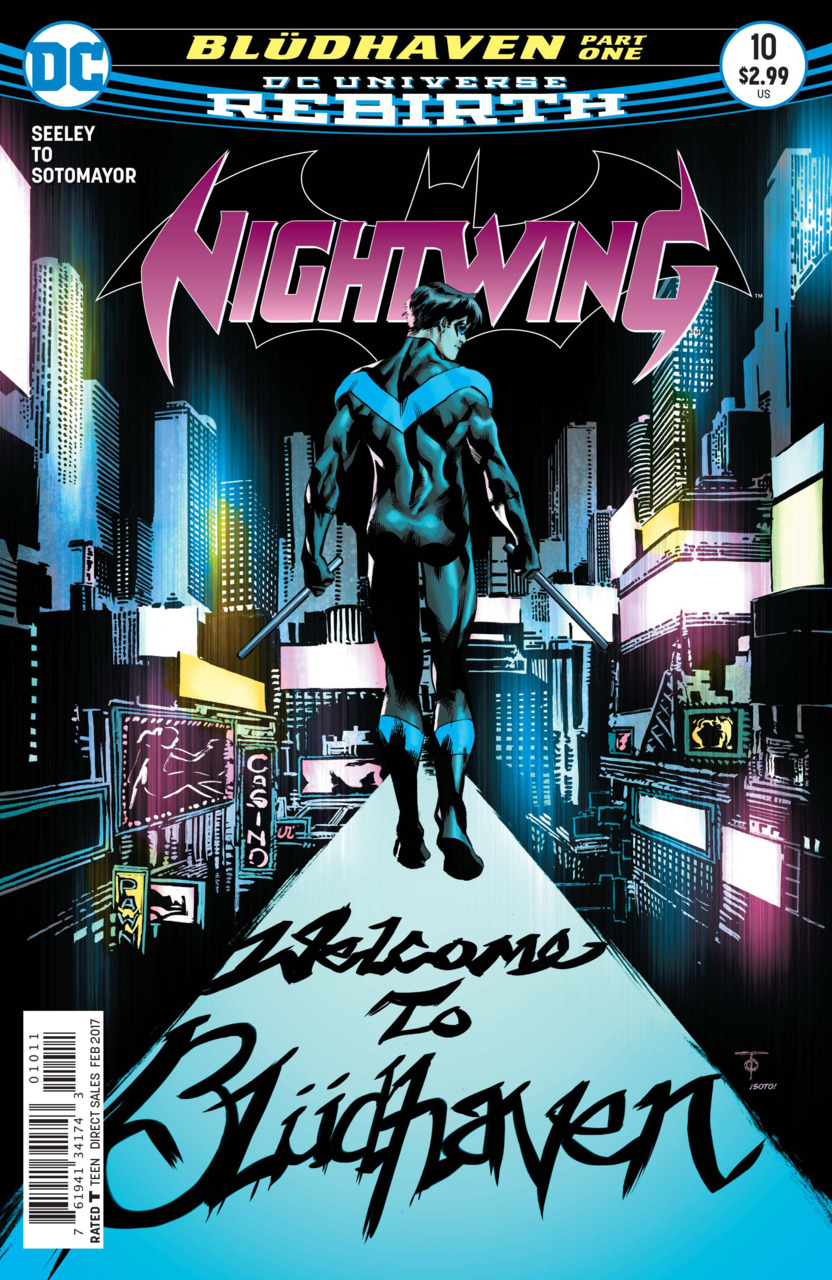 Nightwing #10 flips the script for the series and to my mind is the strongest entry up to this point. While the previous issues featured a morally compromised Nightwing operating in conjunction with Raptor, this features a return to the corrupt city of Bludhaven, which was the effective center-point of Nightwing’s adventures in the 1990’s. Speaking as a reader with one eye looking back at that not-so recent past, all recently collected fresh trades, a stable home-base certainly has been one thing lacking from the series to this point, coupled perhaps with an overly “gritty” and “samey” feel to the art.

After an amusing intro with some banter between Robin (Damian Wayne) and Batgirl, the action flicks to Bludhaven. This issue paints the image of city with supposedly a clear distinction between good and bad, light and darkness – a tourism campaign promotes the bright casino lights of the Boardwalk, but in the shadows past the neon lights, crime dwells.

Cut to a civilian Dick Grayson engaged in an interview for a position in a “Teens Affected by Violence” program. He’s looking to “give back”. There is an interesting device used this issue where the interviewer asks him a question about why he has come to Bludhaven to apply for an unpaid volunteer position. Suffice to say a whole page is devoted to the answer which plays out in Dick’s head – it feels like a clear blueprint for the series moving ahead, about breaking cover, spending some time out of the costume, becoming Dick Grayson again, not the morally compromised figure of the opening arc. He’s concerned, like so many young adults, of being close to family but not too close, so he can get in touch with his instincts again and be his “own man” again.

As he leaves the office there’s an interesting moment where he meet James Nice, cue the sleazy and possibly corrupt worker who invites Dick out to check out the bustling nightlife scene of “the Blud”, but Dick avoids his invitation and exits.

Liberated from the obligations of others, Dick spends a long night or two “finding himself”, which primarily consists of old TV shows, comic book “rebirths” of Robin Hood, in short gorging on the detritus of pop culture which as we all surely know, can be an empty and non-validating experience.

So he goes out the window with his Nightwing garb, because you have to keep it sexy and exciting! We learn that Nightwing has a nifty police scanner in his domino mask, which is pretty cool. Following police reports leads Nightwing to a bizarre confrontation with an ape in the Gorilla Grodd mold. Gorilla Grimm is his name apparently and he’s some kind of a petty crook. We get our first taste of the Nightwing police who automatically come across as “possibly corrupt” as they take down Gorilla Grimm with tasers, brushing aside his protests of innocence which do leave Nightwing with something to think about. Nightwing also gets an abrupt warning, that they will let him go this time but they don’t deal with “the tight types” in the Blud. How intriguing…

Cut to the Bludhaven Tourist Bureau, which is desperate for good publicity to bounce off in an effort to draw tourists to Bludhaven, and they see Nightwing’s appearance on camera as definitely a good thing in their favor!

Meanwhile Nightwing has been given a tip by Gorilla Grimm (shortly before his tasered form was led away) to go speak to Shawn Tsang, who was the woman that interviewed him for the “Teens Subject to Violence program.” There’s a cliffhanger ending which I won’t spoil, but suffice to say, Nightwing is getting drawn further and further into the rhythms of the city.

I’m giving this book a solid four and a half stars and it definitely is my personal favorite in the Nightwing series to this point. Never a weak title, but perhaps an aimless one, a course correction has left this series in an immediately better place than issues prior. And side note, look out for Dixon Park! A delightful little nod to a former creator who certainly was a huge cornerstone of the character in the 90’s and a nice touch as Nightwing comes back to a place he made his own.