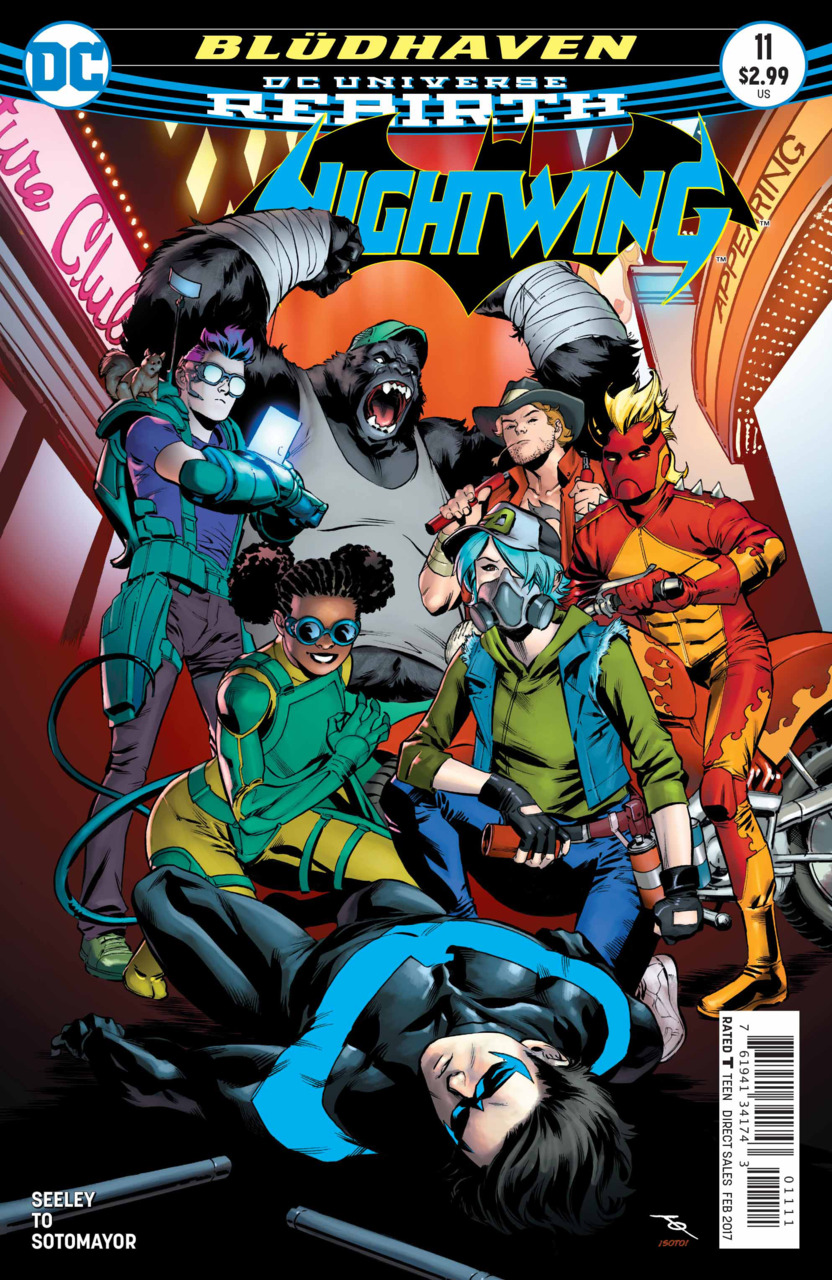 The Nightwing title has certainly flipped the script, the dark conflicted vibe of the first few issues involving Talon replaced by a more colorful and fun vibe as Nightwing begins his adventures in Bludhaven, as introduced in the last issue. That’s not to say the emotional quotient is low. As a reader I appreciated the flashback to “classic Batman and Robin” days, where the Defacer is revealed as a juvenile sidekick/underling of Pigeon, sentenced to some kind of youth detention after she is caught by Bats and Robin vandalizing famous monuments. Anybody with half a heart can feel a young Robin’s confusion at seeing somebody his age, a victim as much as a criminal. “It just doesn’t seem fair”, adolescent Robin says, seeing Defacer carted away in a police van.

Flash to the present and Defacer is certainly no shrinking violet or shy about telling Nightwing to take a hike. She runs a group called The Run-Off’s, a collection of ex-petty criminals caught by Batman, now expatriates of Gotham City, turning to a support group to try and confront the issues which led them down the criminal path. We see a catalogue of names and characters which may or may not be familiar to long time readers. Mouse. Giz. Thrilldevil. Stallion, after attacking Nightwing, only to get beaten back, mumbles “a clinched fist ain’t equal to open arms.” The black-and-white distinctions Nightwing sought don’t seem to be found in Bludhaven either. I personally find the change in locale interesting – it’s obvious what DC are trying to do by going back to basics with the Nightwing character and giving him a city which can “be his”, close to the Gotham universe and its catalogue of Bat-Family, but not too close.

In the meantime Nightwing’s investigation into Gorilla Grimm leads him to the street markets at night. Nightwing is quite a self-aware character here, conscious that he somehow wants Grimm to be found guilty in his investigation and not cleared, not found to be a victim of police corruption, because  that will murky the city he has come to reside in, compromise Dick’s already stretched moral position. Investigations with the denizens of the markets track back to Grimm’s warehouse and evidence of a frame-up. Following this, we cut back to the brightly lit tourism bear office where we see Nightwing is being turned into the focal point of the next advertising campaign to encourage visitors to the city. At the same time Dick Grayson himself is still very much a questioning character, unsure of the rules of a city which had seemed to be a controllable quality but is turning into something else entirely.

We then cut to the developing relationship between Nightwing and Shawn Tsang aka Defacer, clearly being set up for some shipping potential. I can live with that! It’s an interesting relationship to consider, an angle that both of them come from highly controlling mentors that set the direction of their lives – obviously in Nightwing’s case that led to a more positive result but it has still left him unsure of the next step in life, lost in that eternal wasteland of the mid to late 20’s he seems to exist forever in. Shawn seems to appreciate his belief in Grimm’s innocence, and perhaps appreciates even more Nightwing’s realization he doesn’t have all the answers. Unfortunately for this budding couple, the police come and disrupt the party…

The word to describe this Nightwing run to this point is solid and improvising in character depth and I’m happy to award another four stars to this issue. Hop on fast kids, the fun is just starting on this title.