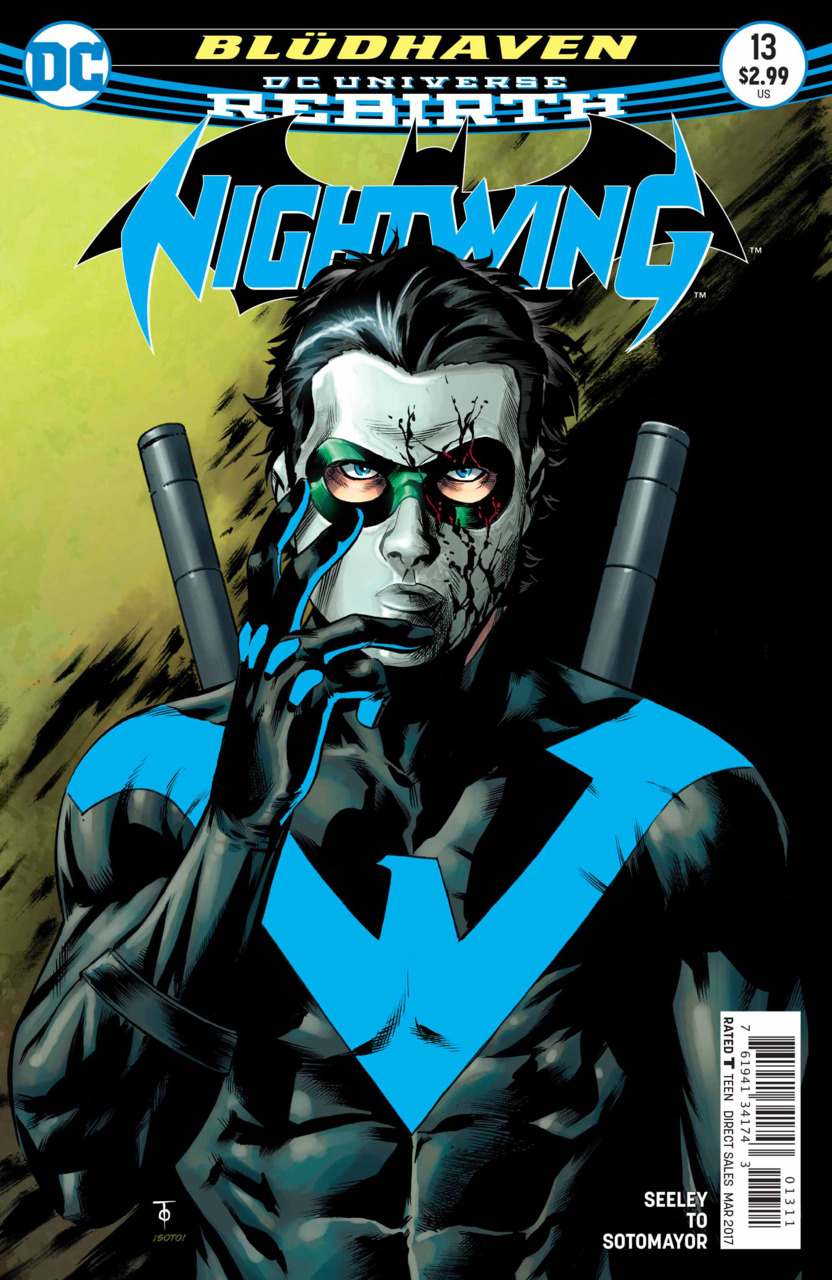 The action in Nightwing #13 kicks off gritty and grimy on a rainy night in Bludhaven, with Nightwing and the gang of the Run-offs fresh off the battle against Orca. With Forsyth dead, and one of their vehicles used by the villain to do it, their motivation is diluted and they scatter. Redemption, it seems, isn’t easy.

Riding redemption no easier is Shawn, currently being given the third degree by a cop which then turns into a request for help – there’s a killer on the streets killing other criminals with a trademark tell. It appears Bludhaven PD might need Shawn’s help after all.

As Nightwing leaps over rooftops, abandoned by the Run-offs and desperate to prevent the death of the Mayor (the silent partner in what appears to be corrupt acts whilst in office), Cherry is experiencing a crisis of confidence in her ad campaign.

Nightwing hits the mayor’s office, running into a scary reverse version of himself, equipped with black market alien tech and trying to frame him for the Mayor’s murder, much like Shawn and Gorilla Grimm were framed. Hijinks ensue, Shawn provides a crazy-ass assist, and (spoiler alert) the killer is revealed, along with Nightwing being pulled further into the action in this city of double crosses and double standards.

This is another polished good issue of Nightwing – it’s a title that doesn’t disappoint, especially after the move to Bludhaven. What is going to be important for this title, is if it wants to remain a genuine contender on people’s pull lists fortnight after fortnight is to keep building and deepening the support cast around Nightwing to let the title and character breathe. The city needs to become a character, too.

I’ve recently been reading Chuck Dixon’s long authoritative 90’s/2000’s  run on Nightwing, (which is currently being reissued in trades, with volume five is in stores now) and I’m struck in his issues by how effortlessly the supporting cast is built around Dick Grayson and subplots are developed. It’s a lofty comparison considering Dixon literally wrote the book on solo Nightwing series, but I can certainly see the trace elements of Tim Seeley aiming to do this in his own fashion, and surely most Dick Grayson fans wish him well. There’s something refreshingly old school and solid about Tim Seeley’s storytelling – I get the impression this is a guy who means to make a significant mark on the character.

The fortnightly release schedule is perhaps assists this fast build and I’m struck by how improved these issues are on the at times semi directionless and joyless Raptor arc. On another positive note is the artistic changes as the series has developed. I find the contrasts absolutely delightful as the rain and gloom of the opening pages shifts to the light pastel colors of the scenes inside the police station and the Mayor’s office. There’s a conscious contrast between the dark alleyways and the softer tones of the corporate offices which works well in this book. The scenes which open and close the book are both in the darker tones of a city which cannot be easily tamed or understood.

Breaking down the duplicitous, shifting nature of the antagonist, hiding behind his freakish “Nightwing-like” mask, we again see the theme of masks and mistaken identity being played out in this city of contradictions, even as Nightwing grapples with his own issues of identity and self-belief. It’s all played with a relatively light hand and is certainly an entertaining read.