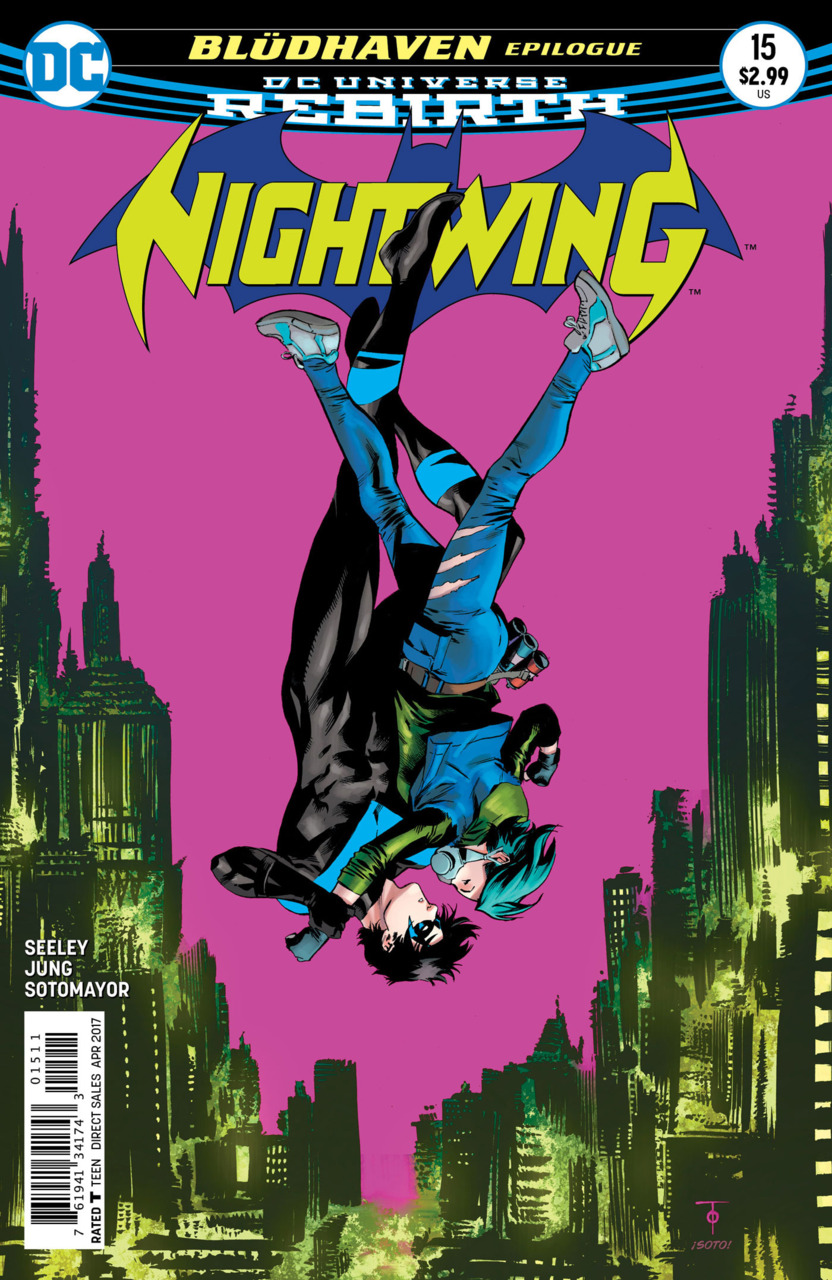 Nightwing #15 is a great example of how to do a modern romance issue inside a superhero tale. We don’t see enough (or hardly any) of them these days, and Even in a Dream (the issue title) is a nice change of pace and character exploration of the interaction and romantic relationship between Nightwing and Shawn Tsang, which had just officially started with a kiss last issue.

Beginning with their first date, and another kiss, the whole issue has a dream-like feel, as we see the blossoming of the relationship with all of the strains and adjustments of new love and commitment. We see Nightwing chat with Wally West (now happily back in the DCU) telling how he came to Shawn in his Nightwing costume with flowers, sealing the deal and making sure she did really know his secret identity (she did).

Snapshots of their first sixty or so days play out, complete with love-making and banter as Nightwing drops casually in through Shawn’s window, on the run from police choppers. In this morally ambiguous town Nightwing is still on the run from authority although that is scarcely the point in this issue which is one of the most tender and heartfelt so far. The gritty overtones of the early issues of this run feel far away and the lovely artwork plays a huge part in conveying this effect of a dream with pastel shadings to the backgrounds and a very effective use of light blue wash backgrounds in key panels, often to highlight Shawn’s mood and uncertainties at times over the relationship, it’s pace and Dick Grayson’s trademark straight forward good guy approach, which includes casually committing to a wedding invite months away when Shawn, in her own words, hasn’t figured out what she’s doing next week.

The issue is filled with little vignettes as Nightwing tours his group of friends as Shawn also discusses the relationship with her own friendship group. Dropping in with Jason aka Red Hood, they discuss the temperament of his new girlfriend, while with his ex, Starfire, they talk about meeting the other half’s parents. Something I particularly enjoyed in this issue was the time and space given to just developing the character of Shawn, who is a relatively recent entrant into the series and in a nice scene with her dad, she explains how she’s not going down the Defacer route anymore, as she now wants to build instead of break.

This is combined with a neat little scene that showed that typical “first fight” even new couple must go through, as Nightwing apologized for leaving the bedroom window open but questioned whether Shawn really wanted him to go as she said, or whether she was just afraid she would disappoint him. Clichéd as it might be, it is a typical “new couple” fight, as the people in the relationship change with their new status and circumstance. Like any change, even when it’s for the better, there is some pain in letting go of what is familiar for the promise of something new.

Near the close, there’s a poignant scene with Batgirl aka Barbara Gordon, and Nightwing. For those who had not read the Nightwing series earlier, their friendship itself seemed to flounder when Babs was critical of his choices with Raptor. The Dick Grayson of this issue, deep in the Bludhaven story arc, is so much more in line with the Dick Grayson that Barbara (and most readers) would recognize – he’s both direct and sincere, smart but pretty much without guile. We get another extended circus metaphor, but it’s a curiously effective one, about staying in the air, riding the current – and he’s finally found a place to land, to put his feet on the ground, and it’s not in Gotham and it’s not with Babs, but she loves him anyway. They have a strong friendship underneath it all. No matter who you ship Dick Grayson with, it’s a strong scene much like the issue itself.

I’m giving this four and a half stars because on top of another solid issue, the romance trappings and the clever use of storytelling combined with emotional, expressive art makes this a comic to remember.