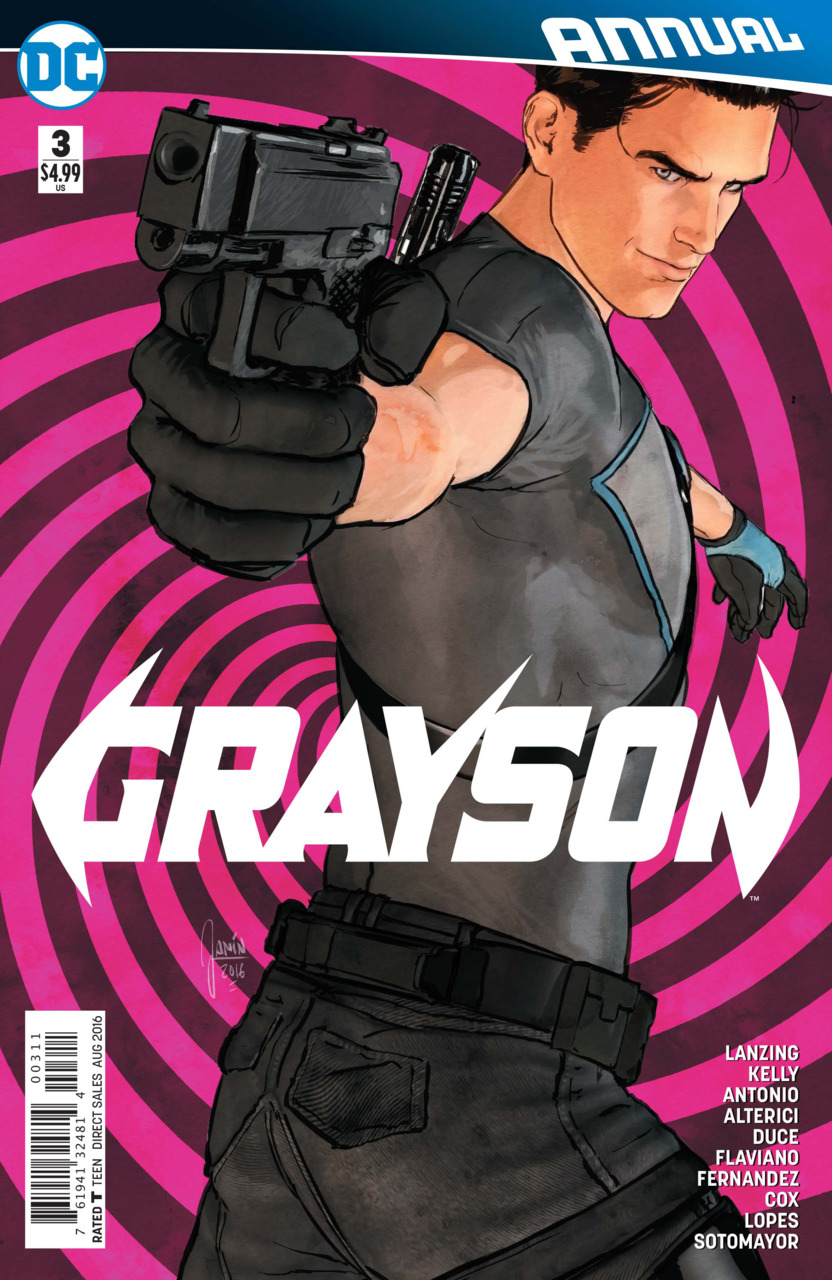 Breakdown: Jackson Lanzing and Collin Kelly have fun this issue. It kinda reminded me of the BTAS episode “Almost Got Him”. Here, we have a group of DC characters meeting together under mysterious circumstances to discuss their own personal run-ins with an Agent 37. As such, we get a series of fun short stories that are all self-contained in this very issue. How these guys nail so many different DC characters dialogue, amazes me. Annuals are tricky, because you don’t want to make it feel useless, but some get upset when Annuals are used as essential reading and a large part of a chapter in a story. Usually I prefer the larger chapter, but this was very fun as well… And maybe part of that was because this was the very last issue of Grayson.

Roge Antonio and a slew of other artist (of which I will discuss in greater detail in the synopsis) all nailed it this issue. I enjoyed seeing other takes on these characters, but Antonio continues to deliver. His storytelling is impressive, especially filling each moment with specific details that are just subtle enough to exist, but don’t beat you over the head with a neon sign, making sure that you see it. His use of inks are well done too. He knows how to balance the page with blacks, and when to dial it back with detail. Jeromy Cox’s colors are gorgeous. I feel like his art palates are better suited for Antonio’s style as opposed to Mikel Janin’s. Janin’s art is so clean and crisp, I feel like a colorist with a more stylized tone would make things pop a bit more, but maybe that’s just me. Carlos M. Mangual finishes out strong. His lettering never is out of place, and never distracts from the story.

Recommendation: I really enjoyed this issue. It’s not perfect by any means, but it’s one of the better done Annuals that I’ve read since the New 52. I say “buy it”.

Synopsis: We follow Harley Quinn into a room with John Constantine, Simon Baz, and Azrael. Jim Corrigan shows up, admitting that he set this meeting up, because he’s looking for a spy that they’ve all had a run-in with, but they cannot remember his face. Corrigan gives John another cigarette, and John tells of his meeting;

Natasha Alterici illustrates this story, as John approaches a castle. He makes it inside to find a man (Dick) bound and being sucked dry by vampires. Constantine tries to save him, but doesn’t make it in time… Fortunately, this was part of Dick’s plan, and he uses the Hypnos in his bloodstream to take out the vampires, and struts on out the door, leaving Constantine’s mouth agape. Azrael then begins to tell his story;

Christian Duce and Mat Lopes illustrate this one. Dick uses a flight suit to enter Kahndaq, as Azrael helps a band of local soldiers hold back waves of St. Dumas knights. They are here to capture the Abraxas Stone, but so was Dick. Dick looks at the people fighting over this stone, and decides to join Azrael in the fight. They win, and Dick reports that the stone was destroyed so that these people won’t be bothered again. Corrigan thanks Azrael for his story, and Harley begins to tell hers as she leans up against Corrigan;

Flaviano and Jeromy Cox illustrate this story. Harley is dancing at a party, when she notices a guy with a spiral where his face should be… She realizes that he is here for the same thing she is, and tells him to lay off. However, his honesty surprises her, and she agrees to work with him. They break into a rich man’s room, and find some of Joker’s gas. Harley distracts Dick by kissing him, and takes off with the container. Simon Baz begins to grow impatient, and Jim cools him down by resting his hand on his shoulder, and talks him down;

Javier Fernandez and Chris Sotomayer illustrate this story. Baz was taking out Parademons when a spy showed up to help him, they follow a Parademon back to it’s lair, and while Baz wasn’t looking, the spy was nowhere to be found along with the Fatherbox.

Corrigan thanks them all for sharing their stories, and after they all agree that the spy must have been Dick Grayson (except for Simon Baz, who has never met him), Corrigan reveals himself to have been Dick Grayson the whole time. He needed to know if they knew who he really was so that he could protect the identity of himself and his friends. Also, because he had physical contact with each and every one of them, the Hypnos is now in their systems as well. He says a code word, which knocks them all out, and makes them forget who he really is.

He meets Helena on a rooftop, and they go on one last mission in Gotham.

Closing Thoughts: This was a very entertaining story, with a clever twist near the end. It is kinda sketchy on where this fits in continuity-wise, but that didn’t bother me at all.