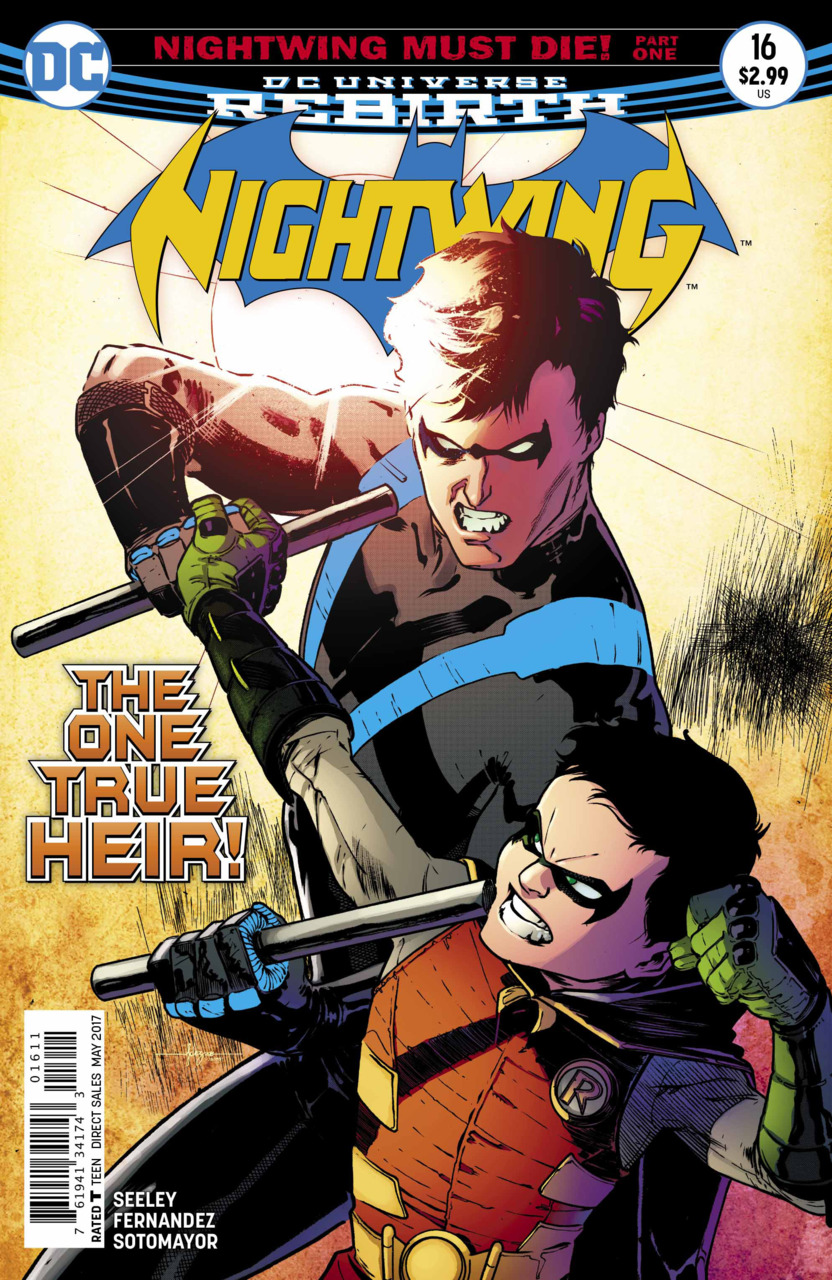 For lovers of the Damian Wayne/Dick Grayson dynamic, Nightwing #16 supplies it in spades. For me as a reader, this was an issue I’ve been waiting for, a further exploration of one of the most satisfying relationships and rivalries in modern DC comics.  Add to this, a potential shift in Dick Grayson’s relationship situation with Shawn, and you have a very live issue!

The stage is set at the beginning, where Nightwing is kissing upside down on what looks to be a balance beam suspended between apartments. There’s even a little sexual innuendo between the two of them, which is always fun. And Shawn has something to tell Dick but doesn’t…

Cut across to San Fran and the Titans Tower, Robin aka Damian Wayne, Son of Batman, is eating peanuts and reading his social media feed on a quiet night in the Tower. (And who, apart from me, finds the slight rewording of social media products exceptionally annoying in comics books?) He’s reading an interaction between Robin and Nightwing fans, one of whom calls Nightwing the “Batman of Bludhaven”. But what really stops Damian from eating his peanuts is the claim that Nightwing, aka the original Robin, will take over the mantle of the Bat and become Batman, presumably casting Damian even further in his shadow.

I saw some internet back and forth with some questioning the extent to which Damian was PO’ed by this prediction, a prediction which was then backed up by the Titans in the Tower, but from my reading of Damian Wayne, his reaction is entirely within character. Notwithstanding his growth in maturity and worldview since arriving so perfectly and so powerfully under the auspices of Grant Morrison in Batman, Damian Wayne is still essentially a teenager, subject to strong mood swings and most definitely a heightened reaction to all things Batman. From the very beginning of his tale where he brutally beat up Tim Drake and then attempt to overthrow Dick Grayson, there was no doubt that Damian Wayne considers himself the heir apparent. One of the most enjoyable facets off the Grant Morrison run with Damian as Robin, and Dick Grayson as Batman, was that whilst they became an awesome crime-fighting partnership all of their own, Damian never essentially changed his core belief in himself and his ability. He likes Dick Grayson a lot, that doesn’t mean he has surrendered his claim. Damian comes from the line of al Ghul, a passing down of a heritage. The title of Batman and his proximity to that means a lot to him.

Turning to the issues events, essentially Damian comes to Bludhaven and interrupts Nightwing’s scuffles with a low ranking criminal crew, the Horsemen. Dick doesn’t have a ton of time for Damian’s tantrum however, as (spoilers, dear readers) he listens to a voicemail from Shawn which proclaims she is “late”, and it’s time for him to come home and bring a pregnancy test. Understandably rattled, Dick Grayson hands Damian a quick lesson in wrestling throws, tells Damian to go back to his apartment while he handles the situation.

People have different opinions on who and what Dick Grayson is and his moods. I’ve often read him a lighter character, others view him as a dark and moody. It all depends where you encountered the character and how he was portrayed. But one element that seems to be a constant is that he is a lover, essentially always in flux romantically, gliding rather than bouncing, from one relationship to the next. He loves and loves deeply. Barbara, Starfire, Shawn, none of them are presented as light relationships. When he falls in love, he falls hard. Although a baby on the horizon does unquestionably alter something fundamental about the character, there’s also the tingling promise of fresh growth, of a life beyond gliding amongst the rooftops and locations. Although I personally will be surprised if we do see an infant Grayson born into this title, I wouldn’t be averse, either.