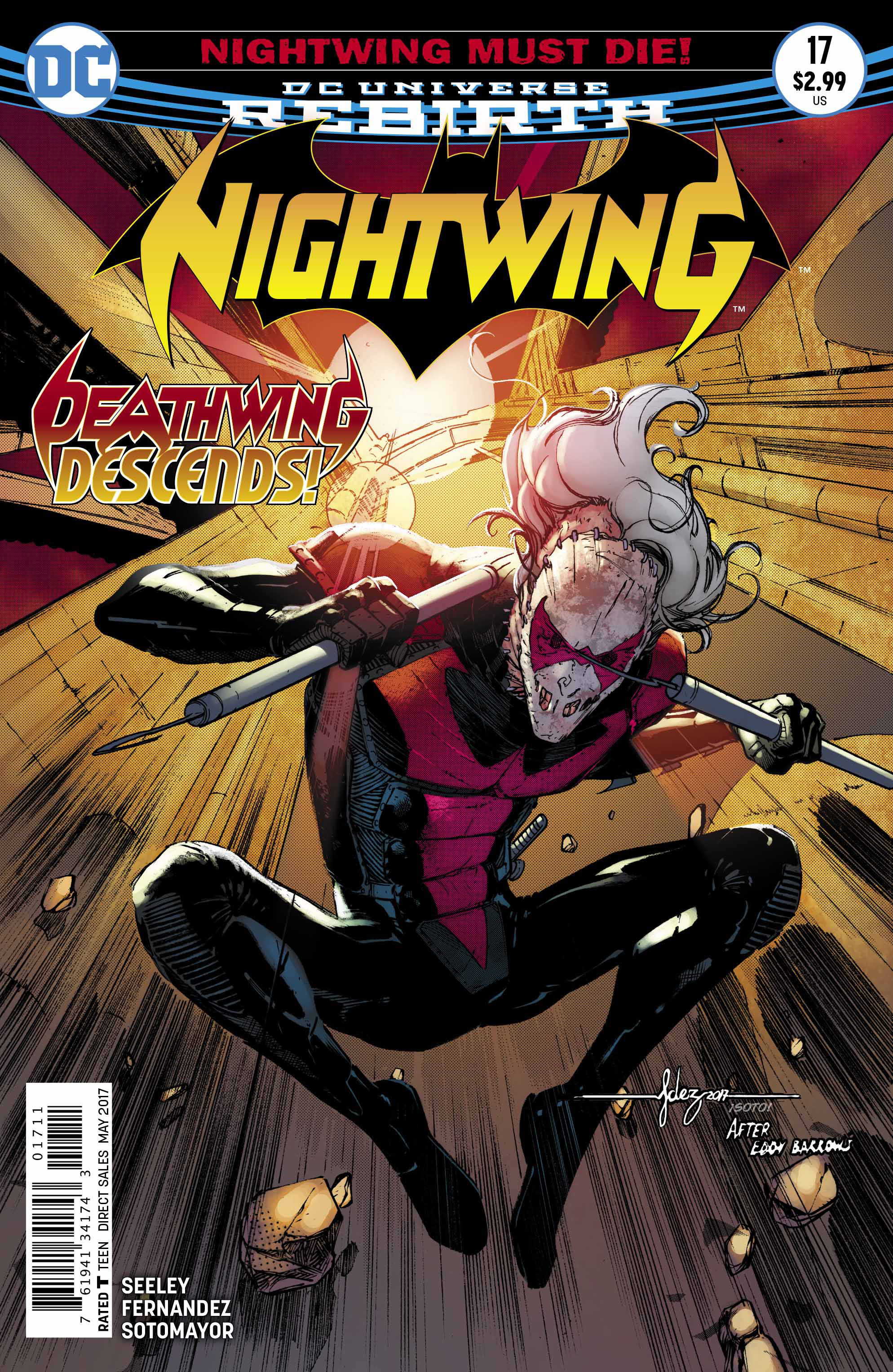 One of my favorite runs in comic books and specifically favorite runs within The Batman Universe is Grant Morrison’s run featuring Dick Grayson as Batman and Damian Wayne as Robin. Nightwing #17 revisits this dynamic through the capable storytelling hands of Tim Seeley and Javier Fernandez and finds the old dynamic as combustible and rich as ever.

The issue starts with a flashback as Damian recounts his imprisonment inside a rotting box at the hands of the Joker, while Grayson fought on, “dressed as Batman”, and how preferable that was compared to the current thirteen hour road trip with Nightwing in the Batmobile! The main issue for Damian is one of legacy. Obsessed with living up to his father’s towering image and reputation, Damian can’t help but feel that Nightwing, setting up the “Batman in Bludhaven” franchise, and now potentially siring a child, is setting up an alternative to what Damian considers to be the only logical way forward: his coronation as the one true heir to this father, Batman.

Of course, as readers of this Nightwing title would now, rarely if ever has Dick Grayson expressed the slightest interest at least in this run of “coming back” as Batman or indeed inheriting the mantle. While they are “stretching”, a euphemism for the two sparring on top of the Batmobile, it all comes out. With his girlfriend missing, potentially pregnant, and responsibilities piling up, Nightwing point blank lays it down for Damian, penetrating his teenage world of drama and self-absorbed thinking. To be a protector of the city isn’t just an empty title, it comes to mean actual ties to actual people, like Shawn, to means obligations and the pressure that comes with them – for an acrobat that has glided through and above life, pushing out, there is now a grounding. And in those moments of doubt he isn’t even sure he wants the Nightwing mantle let alone that of Batman!

Once they arrive at their location, King Richard’s tomb in Western France, a location that is ripe with nostalgia for the Robin Hood adoring Nightwing (a nice throwback to earlier issues which showed Dick reading a Robin Hood book and then a Robin Hood “Rebirth” comic) they encounter the repellent, rotting Deathwing, glimpsed in an earlier issue, a twisted mirror of Nightwing and wearing the red and black New 52 version of his costume. Twisted by forces unknown, the creature is uncannily aware of Nightwing’s personality and past, potentially through some bizarre personality/brain-washing program. Even more troubling, as they fight and Nightwing is wounded and Damian imprisoned in a tomb, the blades of Deathwing send Nightwing into a bizarre hypnotic sequence, where he glimpses possible alternate versions of himself, some of as an alternative vision of Nightwing, or Robin in a college jacket. As a reader I was thrilled by this unexpected twist – are they just versions of a past that leads back to the original Robin, or could they be multiverse versions of Nightwing glimpsed through whatever drugs are on the blade?

This issue moves fast and the pages fly by. The atmospheric art of Javier Fernandez is well suited to gritty fights such as takes place in King Richard’s tomb or the bizarre shadowy images which Dick glimpses after he has been cut by the poisoned blade of Deathwing, but equally the brief well lit scenes of Dick Grayson and Damian aboard the Batmobile still hold a clear intense clarity. Although Fernandez’s style is obviously more inclined to the grim and gritty fight scenes it’s worth remembering how attractive the recent Bludhaven arc was with Marcus To on art duties, and this is a great example of Seeley as a writer playing to each artist’s strengths.

The end reveal of an old Morrison villain is fitting in a story that so clearly plays off that heritage. Shawn is captured by a monster, hostage to the grotesque creations of the villain, her identity and sense of self at ultimate risk. And for Dick Grayson, never has the mantle of Nightwing felt so heavy, lost in the maze of another’s evil.