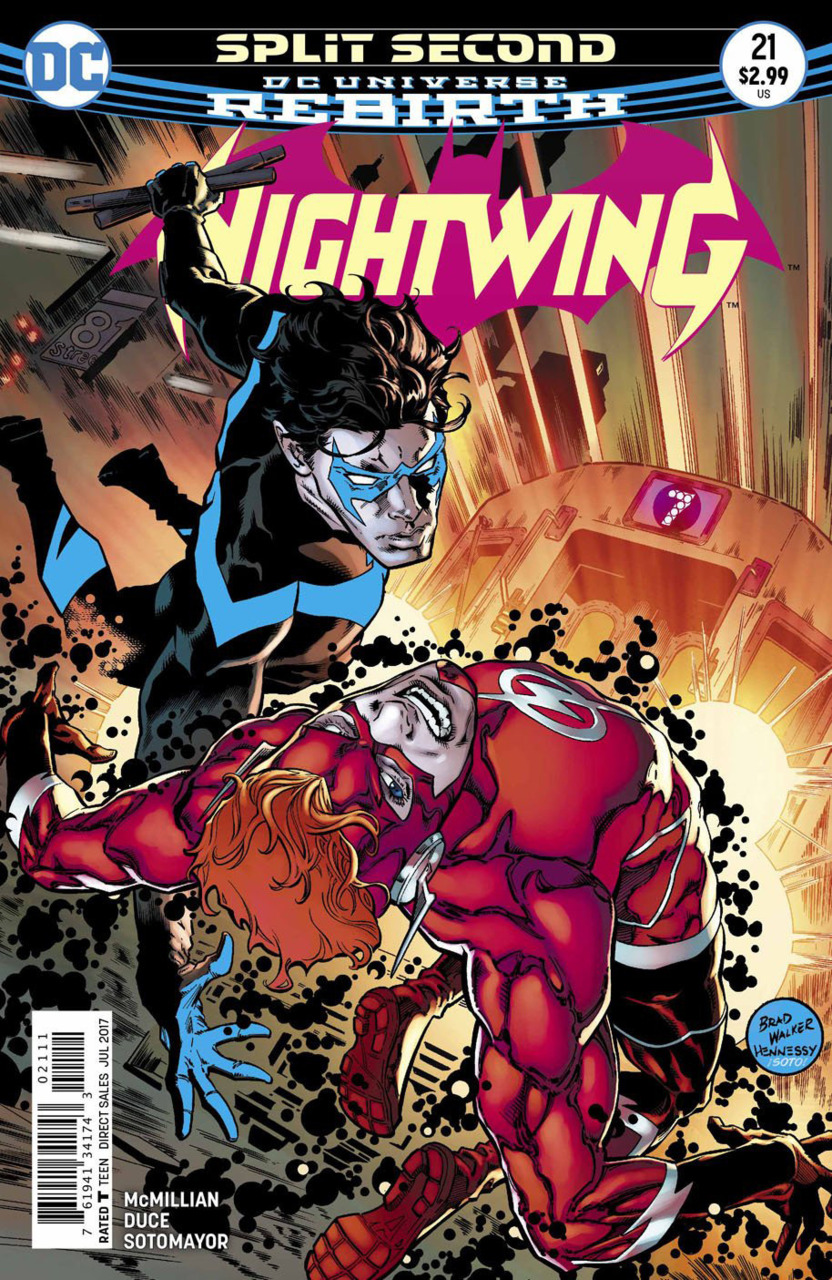 (Spoilers ahead) Picking the pace up after a barely average last issue, Nightwing #21 is a welcome return to form and a special treat for fans of the Titans circa the Dick Grayson/Wally West era, as the action revolves around the visit of Wally West to Bludhaven and his pal Nightwing. The action picks up with an odd beat, Nightwing literally throwing himself in front of a bullet, fired by a woman who has just been mugged in an incident that Nightwing helped to “stop”. I’m aware this is supposed to subvert the standard scene of Nightwing rescuing a “damsel in distress” and I guess it does, but it also struck me as a pretty stupid scene. Was Nightwing really going to allow himself to be shot? That seems rather dramatic. Well as luck would have it, Wally West turns up and stops the bullet so we can all breathe a shaky collective sigh of relief.

Wally West looks cool and slick in his all red speedster suit. The art is dynamic and pops off the page. Right away, I was down for this team-up. Wally is basically bored, at a loss since his re-emergence in this post Flashpoint, post New 52, or post whatever you want to call it universe. Barry is always busy running off to some new emergency, his romance with Linda is on the outs, and Nightwing is the best friend he can turn too. That’s touching actually, especially considering prior to his reemergence in Rebirth, Nightwing had actually forgotten about Wally West! While I’m not going to pretend the absence of Wally left me crying in my beer, but having him back does mean something. He’s essentially a very likeable character and when paired with another very likeable character in Dick Grayson, you have the ingredients for a stellar team up.

Dick Grayson takes Wally to a bar, where they banter with a hipster bartender and a couple of girls who make fun of their names, “Dick and Wally. What’d you guys do, time travel here from the 1950’s?” And in a way, they have, which just makes it all the more funny, a nod and a wink to readers who know that sometime in the misty past and some more innocent time when Dick Grayson didn’t have to dive in front of real bullets (and hey, maybe it was the 50’s) Dick and Wally, and all the rest of the crew, formed the Teen Titans and had many adventures.

Exiting the bar, Wally and Dick run into another quirky set of circumstances, in the shape of missing items that were present seconds before, such as a watch Bruce Wayne gave Dick for his 18th birthday, and Wally’s wallet. Tracking down the perp through Wally’s use of the speed force, they find a rather foolish young would-be villain, who calls himself Timebomb, but Wally wants to call “The Skipper”! Skipper/Timebomb is using some of the alien tech that Nightwing became aware of in an earlier issue and in a light issue, it’s the precursor to a heavier vibe down the line. But there’s very little that’s heavy about this issue overall, which succeeds in almost every area. I keep finding myself asking the same question – is Bludhaven too dark and grim for Nightwing? Very little about Dick’s character seems dark and grim, and I found this issue, where Dick Grayson’s lighter side is brought out by Wally’s presence, could the character not be better served by lightening his surroundings? I think it’s a tonal question DC themselves might ask.

Regardless, the use of cheesy, almost harmless villain and the use of tropes such as throwing the helpless Flash on the train tracks (again slightly subverting the trope) only to be rescued at the last minute, only adds to the playful sense of fun in this issue.

A different writer was on this issue and if Nightwing #21 was just an inventory issue, it was a good one, enjoyable for anybody who likes the Dick Grayson-Wally West friendship, pointing toward the future while respectful of the past behind them.

A very satisfying issue which left a smile on this reader’s face.