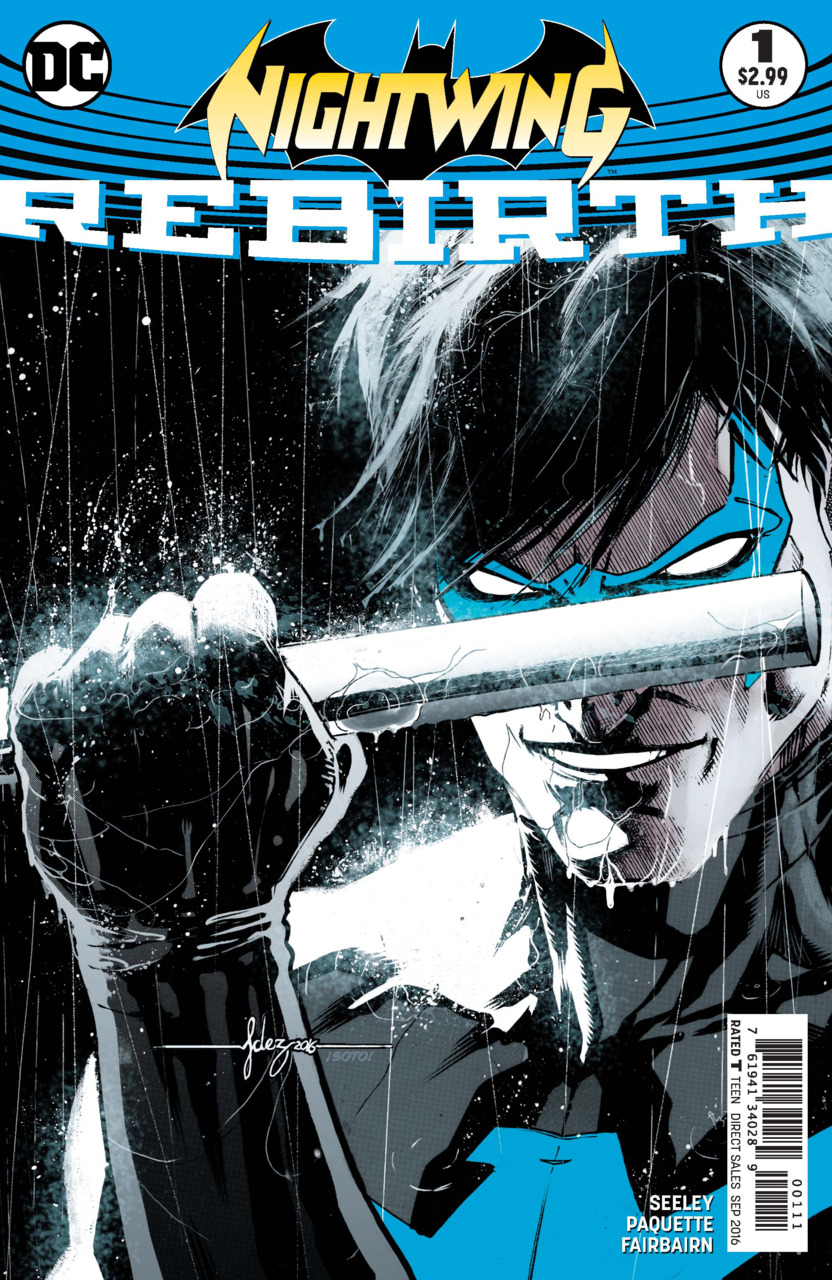 Nightwing Rebirth #1 kicks off with a bang showing Dick Grayson fighting a battle against a bizarre group called The Madmen – Dick tells the reader via narration that the challenges of the issue aren’t those posed by the Madmen, which is good, as they seem a motley bunch of D-listers on their best day.

Mid fight there is an interesting tidbit as we learn that the Nightwing name came not from Dick Grayson tossing around vigilante brandings that seemed to mesh “I am the Night” with a continuation of the “bird theme”. Instead, Nightwing references an ancient Kryptonian hero of some kind that Superman told him about. The cynic inside can’t help but question why Dick Grayson would name himself after a hearing a very average Supes anecdote about a very generic sounding hero, but hey, maybe Dick was struggling for inspiration when it came to thinking up his own names!

Nightwing as a name rocks, let’s not question it, dear readers.

Moving along, locations bounce around – a trip to the arcade with Damian Wayne shows the sharp, affectionate bond between Dick and Damian is as active and alive as ever in this Rebirth world. As a side-note, I hope we see a fair amount of Damian in this book because frankly that relationship is an area which I feel does allow Dick to grow as a character almost as much as it does Damian Wayne.

While it’s almost impossible not to appreciate the smooth and quite sexually relaxed depiction of Dick Grayson, who truly does loves the ladies, and the ladies love him, it shouldn’t be forgotten that the strength of his bond with Damian Wayne was a highlight of The Batman Universe and Bat-Family in the not so distant past. That relationship needs tending too.

We transition in flashback to Helena Bertinelli, who it appears is reverting to the role of Huntress after she is out of a job at Spyral and as Headmistress at St Hadrian’s School for Girls due to I assume events in Grayson which apparently brain wiped or altered both her and Dick and then reset them or some such. It’s worth noting we see a new Huntress costume, which looks cool and benefits from this air of Yanick Paqeuute class which shines through on several major pages of the book – even if I’ve seen enough hoodies on superheroes to last me a life time (cough Shazam).

Its worth noting I find the sections dealing with the school and Spyral very non “new reader friendly” and almost impenetrable. I assume the previous comic wrapped these school/Spyral threads and almost wish they weren’t even referenced in such irritatingly vague detail as it is frankly quite confusing.

As a caveat to this, it is “blink and you miss them” with the half whispered explanations so if you are a lapsed Nightwing fan, or indeed, a completely new reader intrigued by DC Rebirth, I would definitely say grab this book and don’t worry about whatever happened earlier as the core essence of Dick Grayson’s trajectory shines through.

We take quick trip to Wayne Manor, visit Midnighter in flashback, who is busy assembling a God Garden menagerie of some kind, and will I assume have an “ally” role in this series moving forward. The art in these sequences is gorgeous as it shows Midnighter and Nightwing subduing a fantastical horned creature which plays to Paquette’s strengths as an artist. Beautiful.

Back in the manor we see Dick remove a bomb that was implanted in Damian’s nose at some point, (which does feel like the exorcism of some horrid subplot in itself) and then quite suddenly Batman appears in his new yellow outlined logo costume that we are all supposed to be adoring.

In a more ironic and self-aware universe, I wish Dick Grayson would crack a smart line about this ridiculous “yellow outlined” icon/logo Bruce now sports, which just makes me long for just about any other chest piece he has ever worn. Still, it’s 2016 and we are all reborn so lets press on.

Batman and Dick Grayson seem all made up and Batman gives Dick Grayson a very genuine sounding affirmation he isn’t mad at him for getting the bomb out of Damian’s nose, or anything else, which is nice, and then we hit what is obviously the first big story arc – the Parliament of the Owls!

“Better than the Court of the Owls”  seems to be their motto, with very little evidence as to why this is the case, other than they are hiding in Crete as opposed to Gotham and they now have different mask designs. Regardless, Lincoln March (yes I thought he was dead too) is giving a speech to the Parliament about inducting Dick Grayson into their fold – again reference an earlier comic for this (potentially Batman and Robin Eternal) and I actually do think this should be better explained as clearly this is a big plot point for this Nightwing series or initial arc.

Before you know it, and SPOILERS for any Lincoln March fans out there (if there are ANY at all), he appears to be either killed or at least severely wounded mid-speech, by a dart through the eye from a mysterious robed assassin who then assumes leadership of the Parliament in an otherwise bloodless coup. Nobody seems to complain. I’m sure somebody knows who the mysterious assassin is but I haven’t a clue. He is sporting an interesting chain mail style gauntlet and fires darts, so guess away Internet. I put my money on Azrael for absolutely no reason whatsoever but secretly I hope my favorite crazy villain Victor Zsasz is responsible.

Cut back to Nightwing in the Batcave, there is a touching little end scene with Dick and Bruce in front of a Robin costume display. Dick tells Bruce that although he could infiltrate the Parliament of Owls as Robin (hmm, maybe he’s a bit old), Agent 37 OR Batman (which would be confusing), he’s going to choose do it as Nightwing AND in the old black and blue costume! And he’s going to help his friends and anyone who needs him, of course!

Good! Cue Dick Grayson in the Nightwing costume. Which is what we all came to see I guess!

What a busy issue! In summary Nightwing: Rebirth #1 is a solid, well-told comic which does succeed in a good set up for Dick Grayson as a character moving forward and points him in the direction of his first arc whilst teasing an array of supporting players. Tasked with a return to the primary Nightwing costume and a return to the Bat-Family, Tim Seely has delivered an efficient issue which shows his clear storytelling props.

The good definitely outweighs any lesser moments but it should be noted that these lesser moments exist only because the issue as a whole feels weighed down by a need to reference the quite recent Spyral past and wrap-up with an irritating level of obliqueness whilst moving us fast into his next phase. Not for the first time I found myself wishing DC would just have the one page recap section as seen in Marvel comics as frankly that was all that was needed.

The art is well done and consistent, Yanick Paquette is all class. There’s an interesting style to the faces which reminded me of boxers or fighters, especially obvious in some panels with Dick and Damian. Given their occupations I guess that’s consistent. I personally picture a different, more lithe Damian in my head, but the depiction here is visually very “kid brother” and it works.

I look forward to the Nightwing run proper, we are in solid creative hands with this team and I truly find myself both excited and honored to be reviewing this book. Four batarangs well earned!!