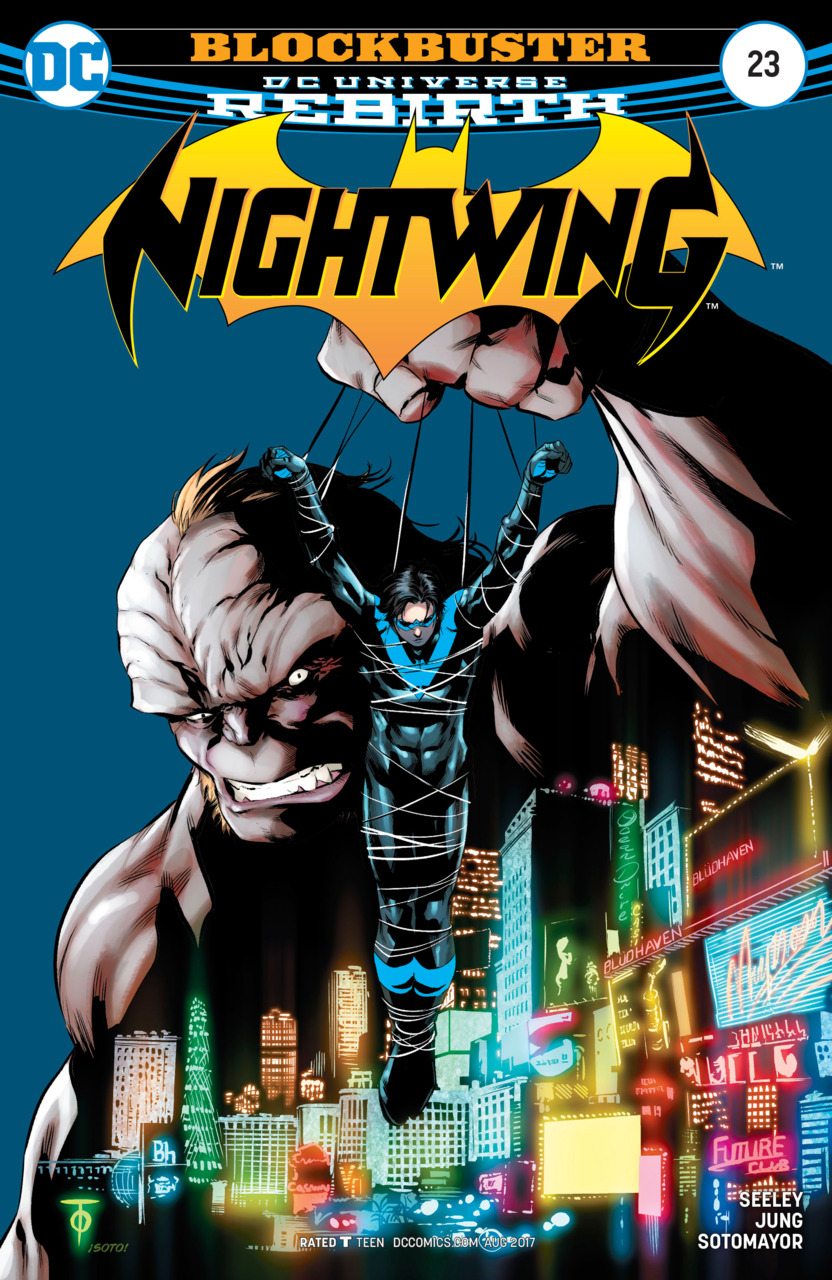 (Spoilers ahead) Nightwing #23 picks up in Bludhaven, with Blockbuster’s brother, Roland greeting Nightwing and telling him the story of his life and that of his brother, Mark Desmond, the original Blockbuster. It turns out that Roland was kind of an ass to his brother, goading him and leading him into trouble when his brother took a chemical agent that made him incredibly strong but also very aggressive and kind of dumb. Roland uses the chemical but due to an alteration made by his brother before he was carted away to jail, he retains his brains during the transformation. Roland is planning to team-up with Nightwing to take down Tiger Shark – what’s immediately apparent is how much of this chemical Roland is ingesting, all through his conversation with Nightwing. This can’t end well in a DC book. We all know characters like Bane who are reliant on drugs like Venom aren’t to be trusted and that’s probably a pretty good and valid moral point for DC to stand behind – my guess is that Nightwing probably shouldn’t trust Roland, and this won’t end well for Dick if he does! Come back to me if I’m wrong, dear readers.

Turning back to the issue, Nightwing is called away into the black market region to a fight a bizarre cybernetic war droid who was tearing up the docklands area and endangering workers. In a pretty cool action scene Nightwing engages the enemy and ends up driving a forklift through her! There’s been a change of artist on the book and frankly, Minkyu Jung is bringing his A game – I like the character models which are very expressive in close-up and I like the solid action beats. Meanwhile, Nightwing is trying to play nice with the Bludhaven Police Department but it’s not a two way street – Detective Svoboda, his contact on the inside, doesn’t play nice or really seem to want his help. It’s a nice contrast to the often cozy relationship between his mentor Batman and Commissioner Gordon – in Bludhaven, Nightwing is still essentially “proving his chops”, she doesn’t really cut him a break and makes it clear that she only tolerates his presence when he is useful to her. She won’t assist with Nightwing’s intel that dirty cops are trafficking in the advanced weaponry flooding the streets of the Bludhaven.

We then cut to Dick’s personal life with Shawn, who could have been reading Nightwing’s narration boxes in previous issues, because she quite rightly has sensed that Dick Grayson was not exactly falling head over heels with the idea of Shawn being potentially pregnant. I really enjoyed the brooding, quiet panels that show Dick and Shawn talking about this – it’s free of bombast and overly heightened emotions, it’s more a reflective sadness as Dick questions what their child would learn from them both. The flashback images of Shawn as Defacer and also Dick’s parents lying in pools of blood throw a somber mood over this section of the comic – it’s neatly told and efficient storytelling. Unfortunately, all of Dick’s honesty is perhaps too much honesty because as soon as he leaves, a weeping Shawn takes a call from Blackgate Prison, she takes a call from her mentor, the Pigeon.

Nightwing cuts out, following the trail of the potentially corrupt cops out to a shipwrecked and abandoned ship out in the bay. Then guess what kids – a rather strange flying super villain grabs Nightwing and deposits him on the ship, where a huge collection of super-villains is gathered to talk shop, and trade in the illicit alien weaponry, and surprise, surprise, it appears Roland is indeed a baddie, and has sold Nightwing down the river! Who could possibly have seen this coming? Well, almost anybody I guess, including this reviewer. He was dependent on chemical enhancement after all.

Assessing Nightwing #23 in the context of the series so far, it’s another solid entry in a series that relies on solidity. The new art brings a refreshing new detail to the character models and although this is primarily a slower-paced issue, with most of the action taking place in dialogue and slight reveals, what action there is was conveyed well. Nightwing is a title to keep on your reading list.