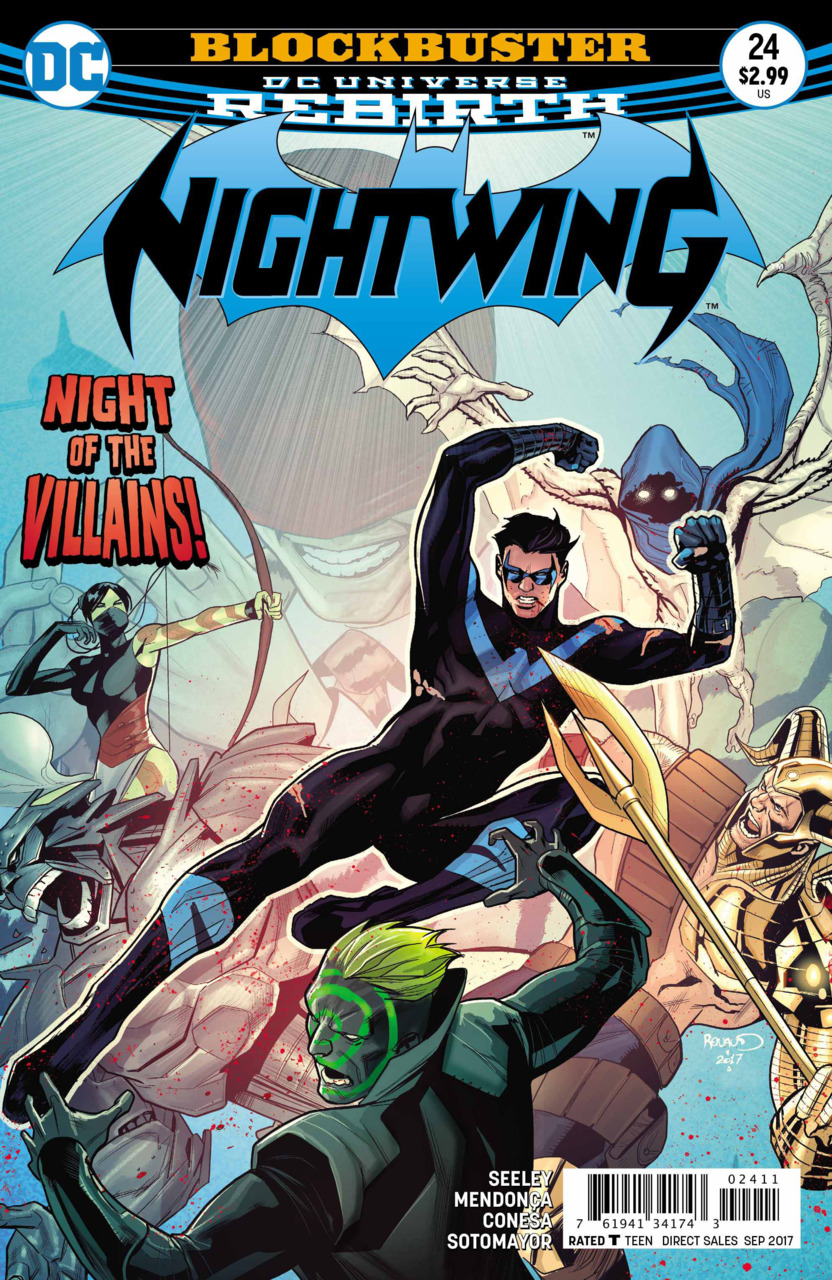 (Spoilers ahead) Nightwing #24 is unfortunately a misstep in what has been a solid run. Primarily this isn’t a failing of the story, but the art change-up on the title is sub-par and while the relationship and dialogue scenes with Shawn and Mouse are done well, the action scenes are sole lacking in intensity and clarity.

Picking up from last issue, Nightwing is facing down against a boat full of goons, who are weaponized by Tiger Shark’s stash. As Nightwing fights against them, the narration is his run-down of who the miscreants on the boat are, a virtual who’s who of barely known D-list villains, Crash, a bizarre demonic styled creature who causes some problems named Skyhook and more, all of them out to get Dick Grayson!

It’s in these scenes where the art, which does have some decent character modelling of Dick Grayson, is lacking when it comes to the fighting. And really, there’s a lot of fighting in this is-sue. The hits keep coming. The Underground Men. China White. Snakepit. Do you know who these names are? This reviewer didn’t, and really they aren’t fleshed out in any capacity, its cameo for the sake of a cameo, an image and a name. Somehow, you feel they probably deserve better. Take for example Clock King. His name rings a distant bell. But really, this is no Clock King I’ve ever seen, he seems an anonymous side character in an issue packed with them. I’ve read a fair chunk of Green Arrow in my time and I know something of Shado – this Shado appears like herself for about 2 panels before Nightwing defeats her with such ease and lack of drama I found myself wanting more.

And then comes an antagonist which I didn’t see coming – Magog! This one I enjoyed and it brought a smile to my face. Do I really believe Nightwing could take this guy down, based on my memories of Kingdom Come and old JSA comics? Not really. And again, we’re treated to an incredibly quick take down that left me as the reader, not wanting more, but dissatisfied with what I got. In a world where we deal with such slow-motion comic storytelling that seems to reward the parceling out of tiny details over twenty-two pages, it’s curious that in this particular issue the fights are done with so quickly it’s a fast forward across details and any emotional or visceral impact.

And so we come to the last fight in this chain. Kid Amazo. Full of tough talk. He cops a blast from Magog’s seized staff, and that’s the end of Kid Amazo. Another one note wonder. Blockbuster, aka Roland Desmond, turns up, but he’s not after a fight. He gives Nightwing a literal ticking time bomb, a problem that is going to require Nightwing to put his life not he line for the ship full of criminals he has just fought through.

The narration has a moment of clarity which does give the issue a little breath – Nightwing seems to be going deeper in what is essentially a flashy fight issue. He senses that perhaps the Blud is darker than the circus act he has been playing out in his mind incessantly since his arrival – Nightwing is now imagining that this is a gladiatorial arena, in front of the jeers of a crueler crowd, fighting to entertain, fighting to die. Meanwhile, as Dick Grayson reflects, the bomb ticks down hard and we are left with a genuine cliffhanger!

This is a strange, odd issue of Nightwing to review and rate. In a way, the flaws are evident and make the book decidedly average – the combination of a rushed fight scenes and non-compelling art mean it barely earns two and a half stars. But then again, there’s some saving graces. There is a beauty to the character models – if they seem stilted they still are quite beautiful. And then there’s the story – I’ve covered how rushed the fight and antagonists feel and there’s no getting away from it, that is the overall feel. But perhaps this is the writer’s way of pushing through the arc without spending multiple issues inside the ship. For me, the jury is out if it’s effective or not. Maybe it’s just effective, nothing more. Either way, this is a solid run and they are allowed a blip.