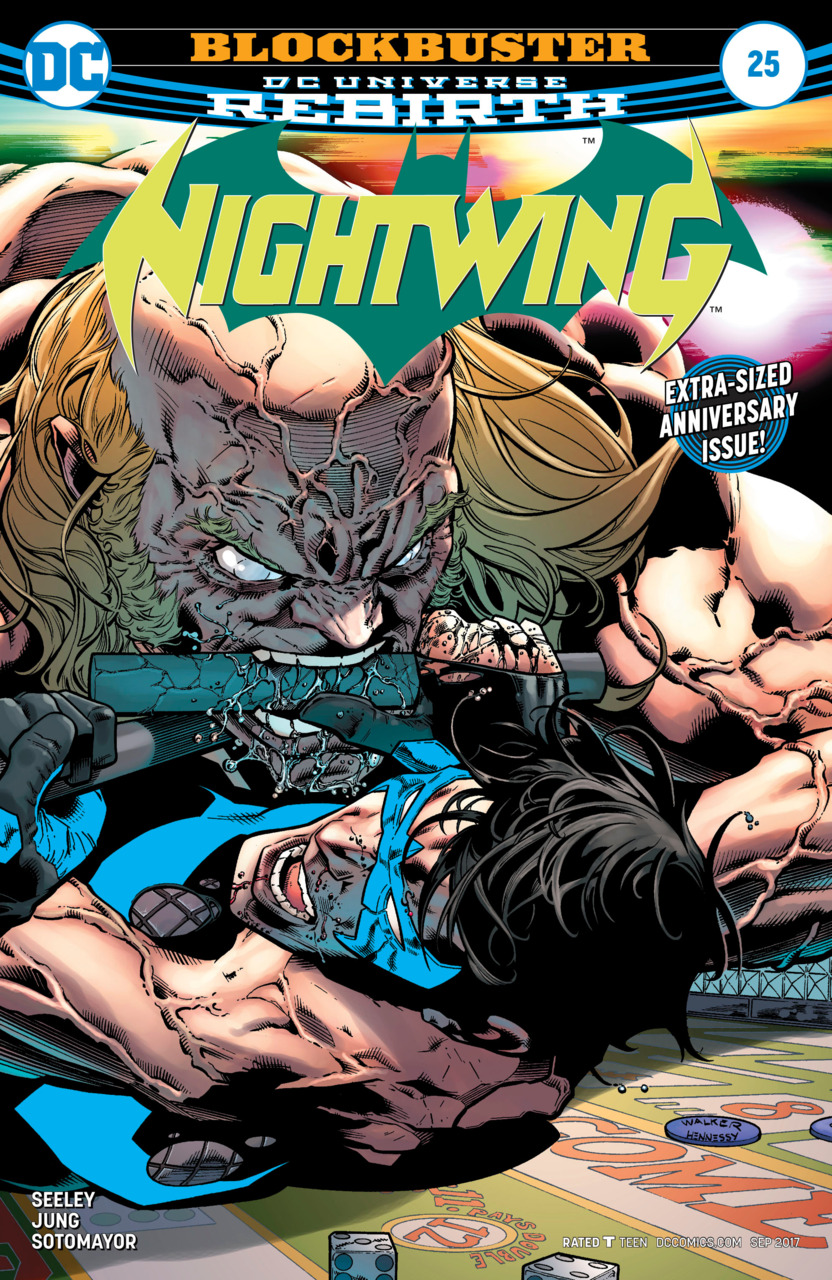 (Spoilers ahead) Nightwing #25 is an impressive return to form for a comic run that has set a benchmark of solid issues with the occasional dip. There’s something strangely grounded about Nightwing in this run and that’s counter-intuitive given both Nightwing’s superhero persona and the constant acrobat allusions. It comes down to character – Dick Grayson is a pretty grounded guy. Sometimes that can lend a certain blandness to proceedings, but more often than not, makes Nightwing a very relatable lead.

Last issue left our hero with literally a ticking time bomb, on a ship filled with villains. Clock King is by chance on hand, and is extremely handy in getting Dick Grayson out of this jam, along with all the assorted super-villains on board the ship. What this might lack in dramatic impact is made up for in fluid, graceful art. The characterization on Clock King’s face is vivid as he reacts to looming disaster.

Things go kind of pear shaped for Clock King as Nightwing seizes the time machine bubble (or whatever is in Clock King’s watch, it’s not super clear) and uses it rescue the band of miscreants aboard the ship in the moments before it explodes. Tiger Shark isn’t happy when he loses “his baby”, and that’s just the start of the disappointments for Tiger Shark this issue!

Cut to Dick dreaming that Shawn is giving him some TLC back in the bedroom, and cut to the combative Detective Svoboda is giving him mouth to mouth resuscitation on the beach! This is a cute scene played for laughs and it works. Seeley’s best work often has a light touch and it aids the book.

Flash to a casino in Bludhaven and Tiger Shark, fresh out of the sea, is storming inside demanding his money and a fast track out of town with the cops on his tail. No such luck. Roland, aka Blockbuster, awaits him! Some awesome visuals follow next, as alien beasts appear at Tiger Shark’s command, locked in a versus match against Blockbuster. Unfortunately for Tiger Shark, his plans of domination don’t exactly succeed as Blockbuster tears through the aliens and sets his sights for Tiger Shark. There’s a nightmarish vision to the fight, which echoes a tamed down sequence from a comic such as Invincible. Although obviously less gruesome, the impact and the splatter effect is still there and sends a powerful message. It’s good art.

We then cut to a barroom scene where Nightwing bursts in, demanding answers. But it’s a strangely docile sequence, almost like a scene between James Bond and the nemesis of a movie, before the shooting starts and anybody gets tied up to a torture machine. It’s a nice character moment between Nightwing and Blockbuster, but namely when Blockbuster is in his form as Roland, when he appears more vulnerable, both physically and emotionally. Nightwing gets “in his head” and targets all of Blockbuster’s power trip as a way to avoid being seen as “the weaker brother” – he isn’t trying to atone for anything, for all the years when he treated his brother like dirt in pursuit of his own goals, his own conquests, from women to drug deals. By just talking, Nightwing, strung out and weakened by the events at sea, just won a round with Blockbuster. He hit him in that savage sweet spot which is a mixture of ego and pride.

Cut to Giz and Mouse – Giz is working on breaking down leads on the Second Hand group which has been busy supplying alien weapons to Bludhaven. And then there’s Shawn and Dick Grayson…

I’ve enjoyed this relationship, which has been a nice mixture of casual sliding into serious, and it’s been fun with nobody being the bad guy. Things have taken a turn ever since Shawn thought (spoilers) she might have been pregnant and it was a blow the relationship perhaps never recovered from. I don’t want to spoil these scenes as they are poignant and kind of heavy. It rings true for anybody who has ever had a romance they believed in go cold. Isn’t that almost everybody?

I was impressed by this issue all across the board. From art to story, this one knocks it out of the park.