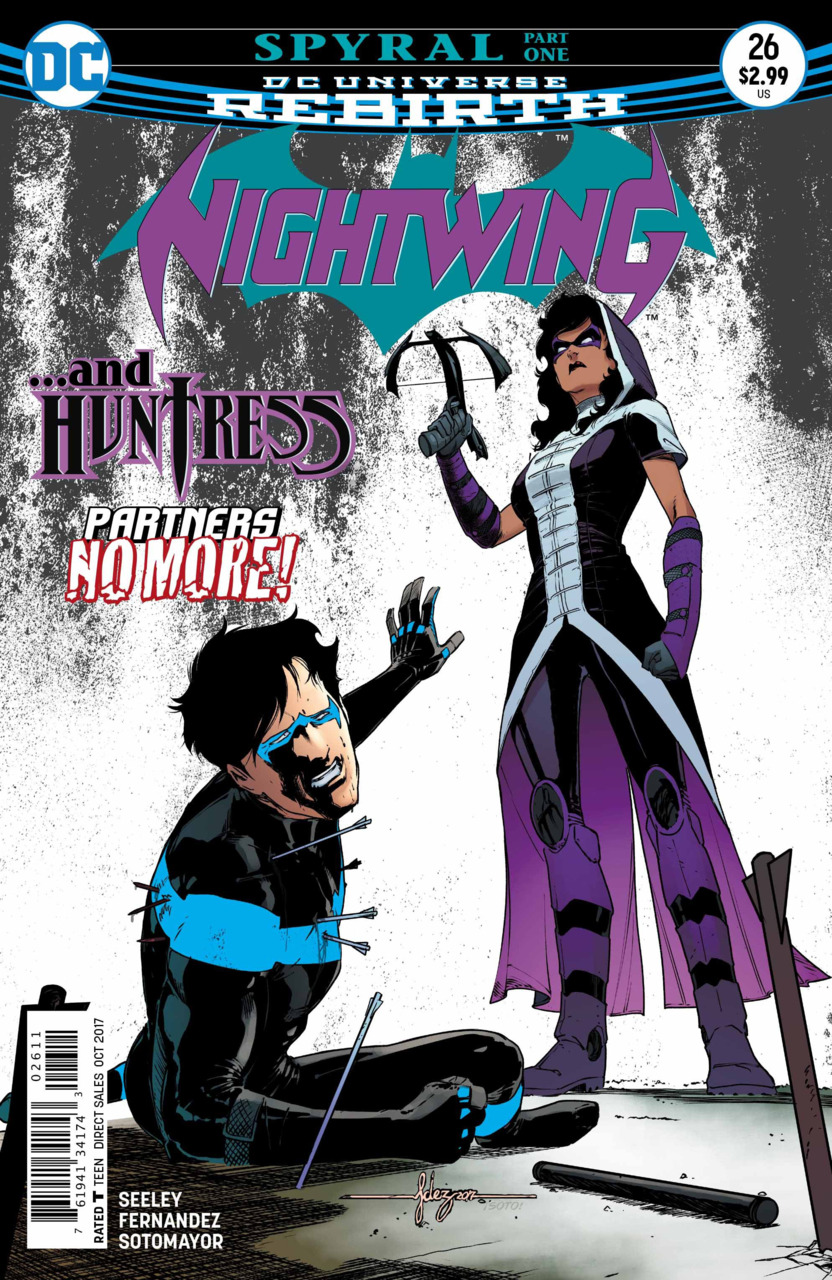 Overview: Dick Grayson is reunited with Huntress as Spyral is reintroduced into his life!

Synopsis (spoilers ahead): Nightwing #26 sees the reappearance of Huntress in the sphere of Nightwing, Helena Bertinelli arriving in Nightwing’s apartment as he luxuriates in a bath mourning the death of his friend, Giz, who died last investigating the dark web links of the Second Hand, a shadowy entity that is supplying Bludhaven’s criminal element with alien weaponry. In the flashback at the funeral we see all the members of the Runoff’s, the support group for former super-villains which includes Shawn Tsang, Nightwing’s barely ex-girlfriend. Nobody is blaming Dick Grayson for asking Giz to investigate, except himself, and maybe Shawn.

Meanwhile Huntress massages Dick’s shoulders, teasing him that nobody is taking care of him, as she presses him for details on Giz’s killer. The main focus of this issue is in essence a Nightwing/Huntress team-up. Nightwing rightly guesses that Huntress is the mood for vengeance, feeding off his own desire for retribution against a killer known as Dracul.

Shawn has issues of her own as Pigeon, her former mentor, is trying to reintroduce Shawn to the world of the Defacer, when Shawn was anti-authority and against The Man. She wants Shawn to start defacing again. Shawn objects and leaves. Meanwhile, anger is flowing through Giz’s former partner, Mouse, who seeks consolation in the Runoffs but seems to be looking for retribution too.

Meanwhile Nightwing and Huntress go up against some street thugs seeking the killer of Giz. This leads them to a mafia restaurant which also doubles as a boxing ring, where freelancers fight viciously under the purview of Signore Argento, a fixer. Nightwing and the Huntress inevitably get in a fight with the boxers, bringing a predictable victory to Nightwing and Huntress. Even as Huntress outs a knife to Argent’s throat, he coughs up the location of Dracul, commenting that he’s been acting like a madman.

As Dick and Huntress go to the address and find Dracul dead, and obviously not as immortal as his namesake, as Huntress notes. He’s been killed in a mob style hit. Huntress finds a flash drive which shows the rantings of a clearing insane Dracul, narrating his confused thought process before he signs off as Agent 19, an agent of Spyral! It might not be a mob hit after all. And as Dick notes, the Second Hand isn’t Mafia, its Spyral! A bunch of Spyral agents standing around looking threatening closes the issue out. The trap is set.

Analysis: The storytelling in this issue is smooth and fluid – Tim Seeley turns in consistently solid scripts on this title and that’s what he supplies again. The addition of Huntress and a refocus on the Spyral storyline is a welcome new slant on this book. Javier Fernandez on art supplies a gritty, scratchy feel to the city and the action. His faces aren’t friendly, not even that of a tortured Dick Grayson, but they are emotive and effective.

If we look at the inner workings of Dick’s narration and character development, he is focusing on how he regularly allies himself with those like Bruce, Damian and Helena, people driven by compulsion and vengeance, going closer to a line and sometimes crossing it, a line that perhaps Dick himself wants to cross but he gets validation from his associates dancing with. It’s an interesting angle on the character and I’ve enjoyed how Seeley has worked with the character in his run. In a way there’s nothing essentially too interesting about Dick Grayson’s internal workings beyond a light touch of humor, but Seely does attempt to add a thin layer of depth to a fairly cardboard characterization and I believe he deserves some credit. As tired as the circus metaphors can get, at least Seeley sticks to what he sells, and it’s easy to imagine a new reader gravitating to this characterization. Huntress is an important element of this issue and I found her persona intriguing and wanted more, not less of her. Seeley played the beats of their relationship well.

The subplot with Shawn is perhaps the most emotionally affecting sequence in the issue – her return to the ways of the defacer will only further alienate her from Dick, and for shippers of that relationship, it must feel as if they have truly hit the rocks.

It’s hard to ever be too critical of the art by Javier Fernandez which is extremely consistent in style and the colorization adds nicely to the mood of the book.

Final Thoughts: This new arc brings a freshness to the title and the appearance of Huntress and the reintroduction of Spyral add another angle to the tale of Nightwing in Bludhaven. Along with the admirable artwork of Javier Fernandez Nightwing remains a strong consistent title coming out of the Dc stable and should be in the pull list of any serious Bat-Family fan.