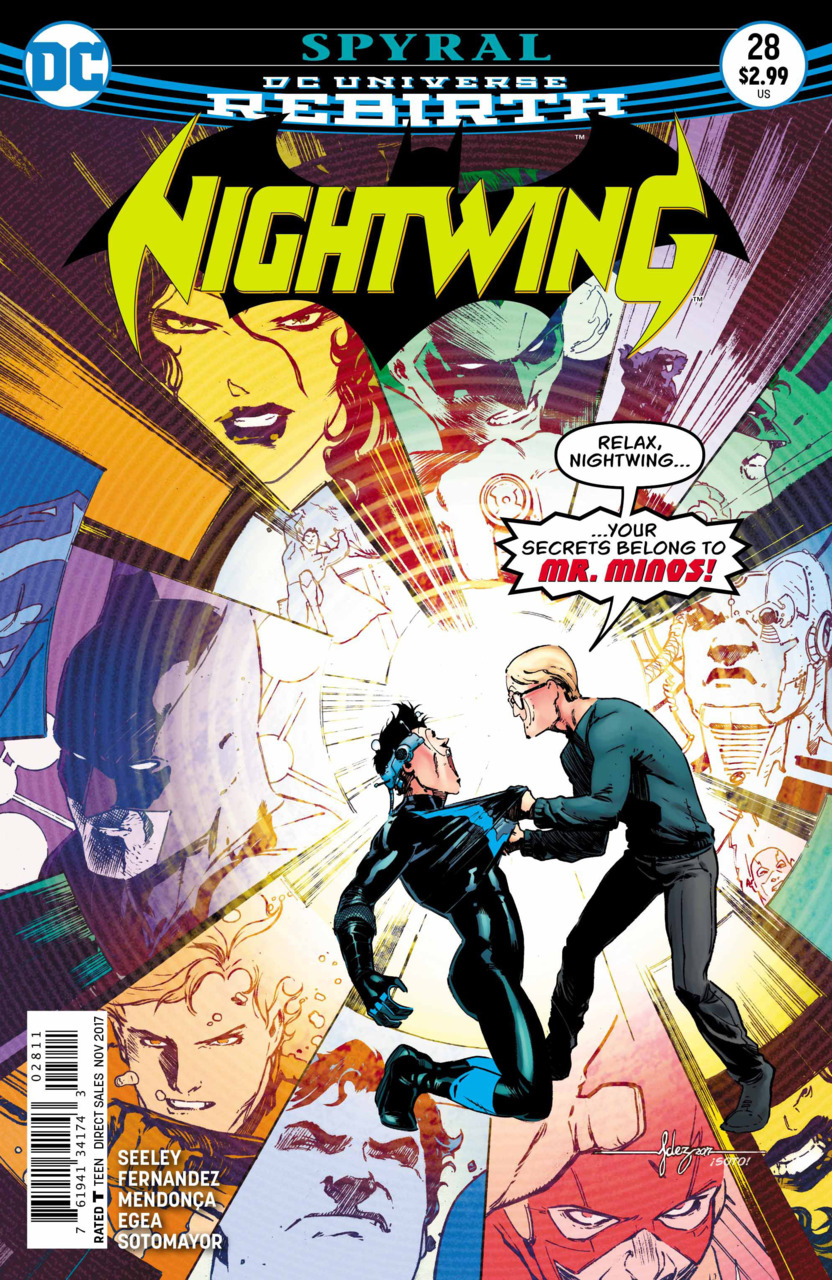 Overview: In the finale of the Spyral story arc, Nightwing and Huntress face off against the evil mastermind behind the Spyral’s arms dealing, Mr. Minos.

Synopsis (spoilers ahead): The story picks up from the last issue with Nightwing inside Spyral Headquarters looking on as his former partner, Tiger, is held captive by another mysterious figure that appears to be impersonating Tiger.  Nightwing attacks him and is taken down quickly by the figure, who is revealed to be Mr. Minos.  Meanwhile, outside, the Huntress and her students, the Skullgirls, try to break in to get to Nightwing when Minos appears and floods the chamber they are in with mustard gas.  They escape into a hidden room called a “bughole” where they find another one of the Skullgirls, Lotti Duff, who had been hiding from Minos after being taken captive.

Meanwhile back in Bludhaven, Mouse breaks into the Marcus Casino and tries to stab Blockbuster as he sleeps when she is interrupted by Shawn, still wearing her Defacer costume.  Blockbuster wakes and attacks them and the two escape as Pigeon looks on disapprovingly.

The issue then cuts to Spyral HQ where Minos has taken Nightwing prisoner and plans to extract his memories and gain access to other superheroes’ secret identities.  Huntress manages to communicate with Nightwing through the electronic device Minos is using and Nightwing proceeds to distract Minos, who is revealed to be an artificial intelligence, while Duff hacks Minos’ software with a virus.  Minos is then finished off by an escaped Tiger, who sneaks up behind Minos and electrocutes him with two power cables, after which Duff’s virus takes hold and Minos is destroyed.

Back in Bludhaven, Mouse is comforted by the Run-Offs and Shawn realizes she has been acting foolishly for almost throwing away her normal life and her relationship with Dick.  Nightwing says his goodbyes to to Spyral and the St Hadrian’s School for Girls before leaving with Huntress.  Nightwing and Huntress end up in bed together as a heartbroken Shawn looks on from outside his apartment window and the issue ends with Tiger leaving Nightwing a voicemail warning him that Minos released Raptor from custody.

Analysis: Ok, first of all, in the interest of full disclosure:  I’ve never read Grayson.  I tried it, but in all honesty, after the first issue it was pretty clear that it wasn’t my thing and I just waited the series out until Dick Grayson put a mask back on.  I’m more or less aware of what happened in that series, but I’m fuzzy on a lot of the details. For instance, I didn’t have a clue who Mr. Minos was.  As someone who has had to play catch-up at times throughout this series, Seeley does a good job of summing up the dangling plot threads and its nice to be able to read this title without having to run over to google to have things clarified.

I do want to call out DC Comics for putting the villain’s identity on the cover of the book when Nightwing is still puzzled when the story starts, as I feel that reveal should be done in story as opposed to on the cover of an issue as it robs the story of any surprise.

Mr. Minos works fine as the villain, but in this story he is pretty forgettable.  The plot to suck out Dick’s memories and learn other superheroes secret identities seems a tacked on and doesn’t really go anywhere.  Minos on the whole seems to be there to wrap up the arms dealing plot quickly and move on to the personal dramas that Seeley to be more interested in writing, which is in itself not a bad thing because its where this issue succeeds.

As this series has unfolded over the last year or so, there’s been a clear intention to move the Dick/Shawn relationship quickly from flirting to dating to a pregnancy scare and now to a rocky breakup and the dynamic that Seeley has developed is interesting.  I did find the personal crisis that Shawn went through to be a little predictable, with her learning a lesson through Mouse about the normal life with Dick that she was throwing away.  Where it works particularly in this issue is in bringing the Huntress into the mix.  This is not the first time that Nightwing and Huntress have hooked up in the comics, but in the past, Huntress has been so damaged a character that there was never any doubt that she wasn’t sticking around for very long.  This version of the Huntress is a far more balanced and likeable character. Dick ending up in bed with her isn’t simply him making a bad decision while his girlfriend and him are on a break like a throwback to an episode of “Friends”.  There’s some real history between this version of these two characters and bringing Huntress into the mix is an interesting twist on complicating Nightwing’s love life.

I also must complement the art by Javier Fernadez and Miguel Mendonca.  Both artists handle the art chores well  in both the quiet moments and action sequences and it’s a nice change on a bi-weekly title to have two artist’s styles match up so that the change in artist from one page didn’t distract from the story.

Final Thoughts:  This title continues to be an entertaining read.  While I found the wrap up of this issue a little forgettable, the personal stakes ended the story on a strong note and I’m looking forward to the next issue.