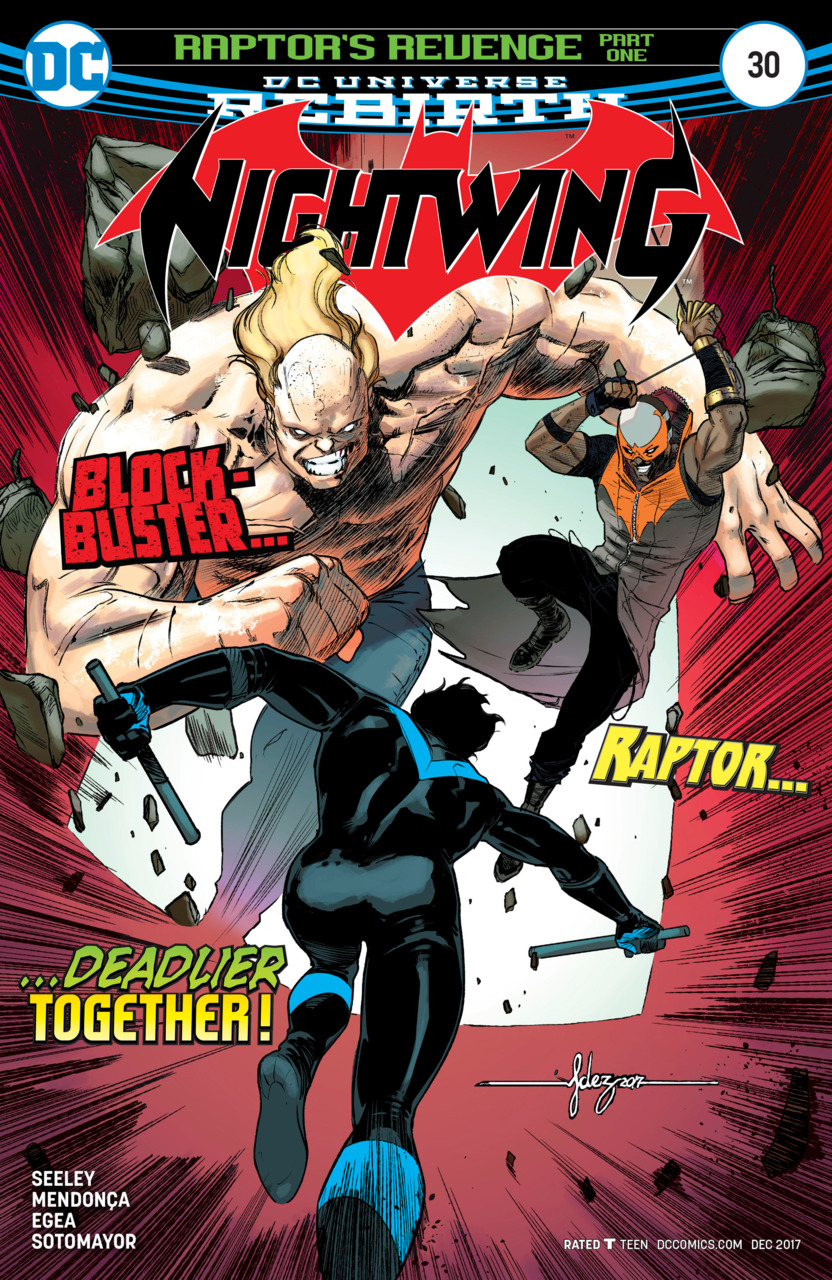 Overview: Nightwing deals with a new romance with Huntress and looks for allies as Raptor returns to Bludhaven.

Synopsis (spoilers ahead): Nightwing swings through Bludhaven remarking about how the city has become his home.  Meanwhile Blockbuster deals with complaints from his clients about the Second Hand weapons that are now falling apart, with Blockbuster blaming Nightwing and promising to make things right.  The story then cuts to Nightwing fighting off a Kobra attack on a fundraiser for Bludhaven Senator Rhett Pollito when he is attacked by Raptor.  Raptor makes his escape and Pollito vows to the media to get tough on crime, by cutting funding to programs that he accuses of breading criminals, such as the community center ran by Shawn.

Nightwing and Huntress then share a romantic moment on a fire escape before Nightwing meets with Detective Svoboda, who turns down Nightwing’s offer to partner up.  Nightwing then goes to the Run-Offs to ask for their help, who also turn their backs on Nightwing, blaming him for the death of Giz.  Nightwing then pays a visit to Blockbuster, with Nightwing promising to leave Bludhaven forever if Blockbuster helps him defeat Raptor.

Analysis: After being interrupted for the Metal tie-in, Gotham Resistance for an issue, writer Tim Seeley picks up where he left off in issue #28.  Gotham Resistance isn’t addressed at all in the story, which makes the interruption of last issue all the more jarring, but isn’t really the fault of this issue.

Nightwing has moved head first into a relationship with Huntress, which is by far the element I enjoyed the most in this issue.  The relationship with Shawn always seemed somewhat forced to me, and seemed like the book was trying to make Shawn an important figure in Dick’s life without putting the time in to make the readers actually care about the character, which was compounded by the time jump and the pregnancy scare earlier in the series.  Given the history of Huntress and Nightwing, both before and after the New 52 reboot, it automatically gives this relationship some weight to it.  This version of Huntress also seems like a far better match for Nightwing and the two seem to have started a healthy and caring relationship, which is nice to see.  DC appears to be adamant for some reason that Nightwing can’t pair off with Batgirl or Starfire, so in a world where his more traditionally love interests are off the table, Huntress presents an interesting place to take the character.  As much as I like this part of the storyline, with the creative team change coming in December, I don’t expect it to last.

I do find it strange that Dick and Shawn weren’t given a moment to clear the air, which makes me suspect that the Dick and Shawn show is far from over, which frankly is disappointing because as stated above, I find myself loosing interest when she shows up on the page.

The rest of the issue is mostly set up, with Raptor briefly appearing to remind the readers as to why he is such a threat, and the rest of the issue spent on Nightwing trying to organize some sort of back-up for when Raptor next strikes, which everyone turns down.  I find it odd that they would make Dick so reactive.  It appears that a little time has passed since he found out that Raptor was released from jail, but he doesn’t do anything to prepare for Raptor until Raptor’s first attack.  This to me is an odd choice considering Nightwing was trained by “Captain Prepared” himself, Batman.  If Raptor is supposed to be such a serious threat, then why is Nightwing waiting for Raptor to strike before reaching out to everyone for help?  Its also not clear where this issue takes place in relation to Metal, and as a result there’s also nothing addressing why he wouldn’t go to any of the Bat-Family or the Titans before offering to team up with Blockbuster. The cover hints at a team up by Raptor and Blockbuster, which doesn’t appear anywhere in this issue and makes me wonder if that’s coming in the next few issues.

The art by Miguel Mendonca’s pencils and Diana Egea handles the action scenes and quieter moments well.  Bludhaven has been made over in this series to resemble something closer to Atlantic City and Chis Sotomayor’s color work brings the city a neon colored vibe that fits the tone of the type of city they are trying to portray.

Final Thoughts: You can tell that Seeley is moving pieces around the board to wrap things up before he leaves the book, and it’s an enjoyable read.   I’ll be interested to see when its all said and done, if any of the elements of this story will remain when Sam Humphries takes over in December.