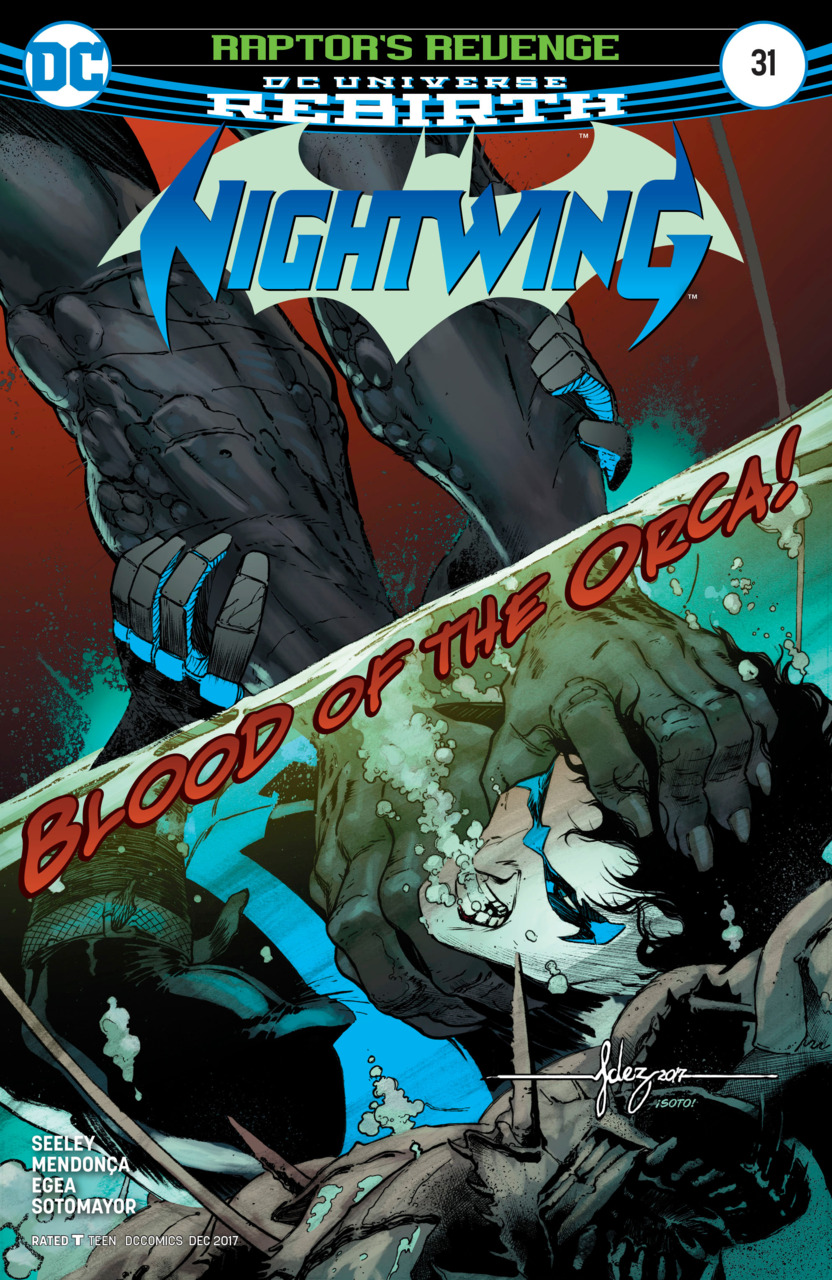 Overview: Raptor continues his plans for revenge by attacking Blockbuster as Nightwing looses another ally.

Synopsis (spoilers ahead): The story opens at the Marcus Casino where a group of students are about to be addressed by Roland Desmond.  As Desmond is getting dressed, he his attacked by Raptor.  Raptor then hangs Desmond from a statue and addresses the students, forcing Desmond to transform into Blockbuster in front of the students as Raptor disappears.

The story then moves to a lab by the Bludhaven waterfront where horseshoe crabs are being harvested for their blood for medical use (which is apparently a real thing).  The lab is raided by Avery Martell and the Whale’s Enders gang which is then thwarted by Nightwing and Huntress.  Martell injects herself with a serum to gain an advantage in the fight and transforms into a monster for a brief moment before collapsing as the rest of her gang surrenders.  Nightwing then calls Blockbuster, who had tipped him off to the robbery, which leads to an argument with Huntress, who had bugged Nightwing and is angry over having just done Blockbuster’s dirty work for him.  The argument ends with Huntress kneeing Nightwing in the groin and sucker-punching him and the walking away, presumably ending their relationship.

Against the protests of the rest of the Run-Offs, Shawn flies off in her Defacer costume to warn Pigeon of the impending gang war, only to discover in Pigeon’s apartment Raptors mask and multiple files and articles on Blockbuster and Nightwing, leading her to realize that Pigeon and Raptor have been working together.

Meanwhile, at the Marcus Casino, Dick Grayson, nursing his bruised face, starts his shift as a blackjack dealer as he keeps tabs on Desmond.  The issue ends as an unmasked Raptor sits down at the blackjack table and asks to be dealt in.

Analysis: From the start of this series, the book has been trying to build up Raptor as something of an arch nemesis for Nightwing.  I understand the impulse to do this.  Nightwing doesn’t have a deep bench of villains the way that some other characters do, so why not create some new ones?  There are things about the character that are certainly interesting.  He’s got a cool sounding name and a robotic hand and I like the idea that he’s tied to Grayson’s past in the circus and that he is profoundly disappointed with the way that Dick has turned out.

That being said, I think that Raptor has a long way to go before anyone is going to be excited for “anther classic Nightwing/Raptor story”.  So far Raptor seems to want to randomly show up to monologue his victims to death with speeches about brand recognition to the point that it would be more fitting if Raptors supervillain name was “the Marketer”.  Other than a vague notion of wanting revenge, Raptor doesn’t up to this point seem to want anything other than to cause trouble and I don’t know if that is a strong enough motivation for such a new character.  Given their history, Raptor’s actions should feel much more personal at this point.  I will say that having Raptor approach Dick in his civilian life at the end of the book feels like a step in the right direction but I feel that its something that should have happened much earlier in this story.  There’s still a couple of issues left in this run before writer Tim Seeley finishes his run on the book so maybe Raptor’s story and motivations will become more clear, but as it stands, I find Raptor to be fairly forgettable and I really don’t care to ever see this character again.

This issue marks also brings the end of the Huntress/Nightwing relationship.  I’m on record as having been a fan of this relationship, for all one issue that we saw of it.  This storyline comes to an end so abruptly that it makes me wonder what the point was in doing it at all.  It also has me wondering at what point Tim Seeley was told that he was leaving the book and perhaps he started a storyline with Nightwing and Huntress that there isn’t time to tell while everything else is wrapped up so Huntress is quickly taken off the board.

This brings me to the reveal of Pigeon working with Raptor.  I’ve avoided taking about Pigeon since I started reviewing this book because its hard for me to talk about the character, who has possibly the lamest gimmick this side of Kiteman, without it turning into an unnecessarily beating.  (She’s got feather wings, and she ruins statues… like a pigeon…  we get it) Its just a character that doesn’t resonate with me.  Pigeon has, to this point, been a fairly innocuous character and I fail to see how her being in league with Raptor does anything to up the stakes for the story.  I also feel that like if Seeley wanted to make the reveal that Shawn’s mentor was in league with Raptor, the book should have spent some more time with her to make that revelation feel like a real betrayal.

The pencils by Miguel Mendonca do a good job on the action in the story, but I especially like his character work in the quieter moments, such as the break-up sequence between Nightwing and Huntress.

Final Thoughts: The ending of a thirty plus creative run on a book should have the feel of an event, with the issues building to a big finish and I just don’t get that sense from this book.  The characters seems to just keep circling each other without any sense of building urgency.  Seeley has had a lot of good ideas throughout his run, and it’s a shame to see his time on the book ending this way.  At this point, I’m looking forward to this run being over and to the creator change in December.