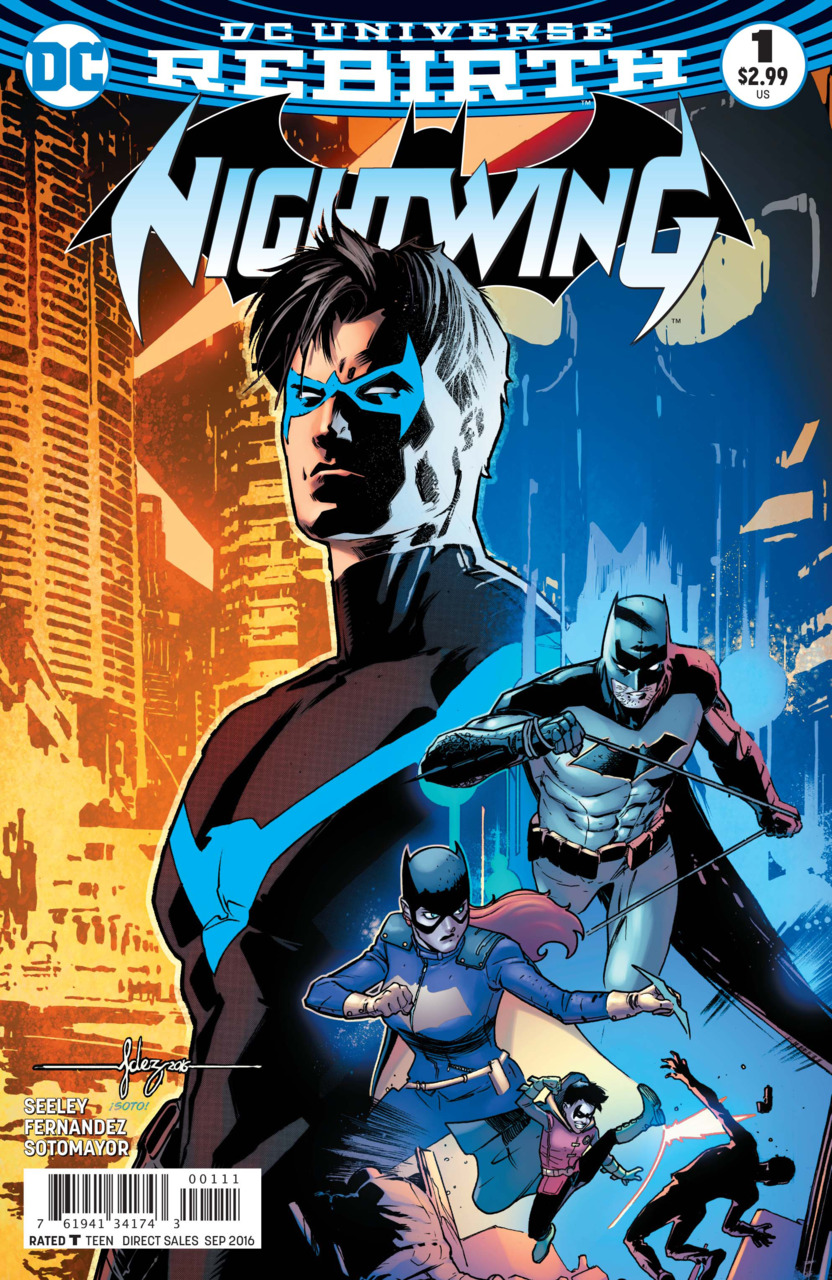 Nightwing #1 is certainly an interesting and well made comic and is very much in keeping with the much lauded “back to basics” espoused by Geoff Johns in the Rebirth announcement.

The comic begins with two very strange characters, one of whom seems undead, stealing coins from a  river in Romania, in connection with the Parliament of the Owls. Unfortunately the two meet a sticky end at the hands of the same assassin who seemingly killed Lincoln March in the Rebirth issue.

Cut to an acrobatic exhibition in Italy, where Nightwing foils an assassination of a politician whilst reminiscing about his life with circus metaphors. There’s a nice, fluid approach to the art which definitely fit with the lithe, acrobatic vibe of Dick Grayson in action. He makes a cryptic remark about the Parliament of Owls following the rescue, reminding readers he is apparently going undercover in their organization.

Cut to Greece, Nightwing meets with an Owl who (correctly) questions Nightwing’s loyalty to the cause, considering how he was a feted superhero. Nightwing is given a mission to partner with Raptor (its nice of them to go with a “birds of prey” theme) a vicious thief and killer who has been co-opted to the Owls cause. Nightwing makes a sarcastic remark as he leaves, and all in all, appears to be amongst the most unconvincing double agents I’ve ever seen. Not that it really matters as it’s all quite fun.

Cut to Gotham City, where Damian and Batman are going the whole nine yards in training. Dick Grayson (who must be racking up some frequent flyer miles) has come to ask for Bruce’s advice. Bruce, in the tradition of the Elves, says neither yes nor no, but does indicate he’s willing “to bankroll the covert missions of Nightwing, but this is NOT Batman Inc”, which is pretty nice of him really. Does this mean Batman won’t be handling the tax write-offs for these missions? That isn’t clarified.

We then finally see a scene with Barbra Gordon and Dick above a rooftop, which is cool. It’s very much Burnside Batgirl who turns up, with Dick Grayson in civvies.  I quite like Burnside Batgirl and she isn’t about to turn into Oracle so I may as well just get with the program. It’s a somewhat muted though amicable scene as Babs questions Dick going out on another spy mission so soon after coming back from “the dead”, in reference to past events. Dick Grayson treats us to another of his circus sayings which certainly get a workout in his life, about how no mater where goes, “he will always swing back.” I would find such comments tiring but we unfortunately don’t see Barbara’s response. Perhaps an eye-roll. She does ask him for a gift from his travels and he responds there is a nesting doll with her name on it – lucky her, I guess.

Cut to the final scene where Nightwing is somewhat oddly examining his Barbara nesting doll in the middle of the night in a park (leaving me to think he has a stockpile), when the aforementioned Raptor, all attitude in an outfit that looks like something a 90’s Azrael might don, introduces himself, before beating Dick Grayson up pretty easily. He then ominously tells Dick he needs to get himself a better mentor, “Because everything Batman taught you is wrong.” End issue.

Hmm! Harsh words from Raptor, who so far, seems an awful person.

It’s clear DC are attempting to reposition Nightwing/Dick Grayson as a front and center drawcard again, and the bi-weekly format with the talented, solid creative team of writer Tim Seeley and Javier Fernandez on art should go a long way to achieving that. Nightwing need a good solid base if it is going to be a bi-weekly big seller and I give major props to DC for making sure the character and title have that opportunity. Whilst I am not a Nightwing expert, I certainly have read many issues featuring solo Dick Grayson and the character feels on point. New readers will find this very accessible. I will just make the point that if we are going to be globetrotting on a bi-weekly basis DC should seriously think about a recap page so that space is not lost in the issue itself telling us where he has been and what he is doing.

I’m tempted to give this comic more than four stars but I feel we are in the construction phase of the story arc and while this is a neat and well told issue, it is a stepping stone into the arc which will hopefully continue on an upward trajectory. I found the art extremely solid and easy to follow and a nice fit for the writing style.