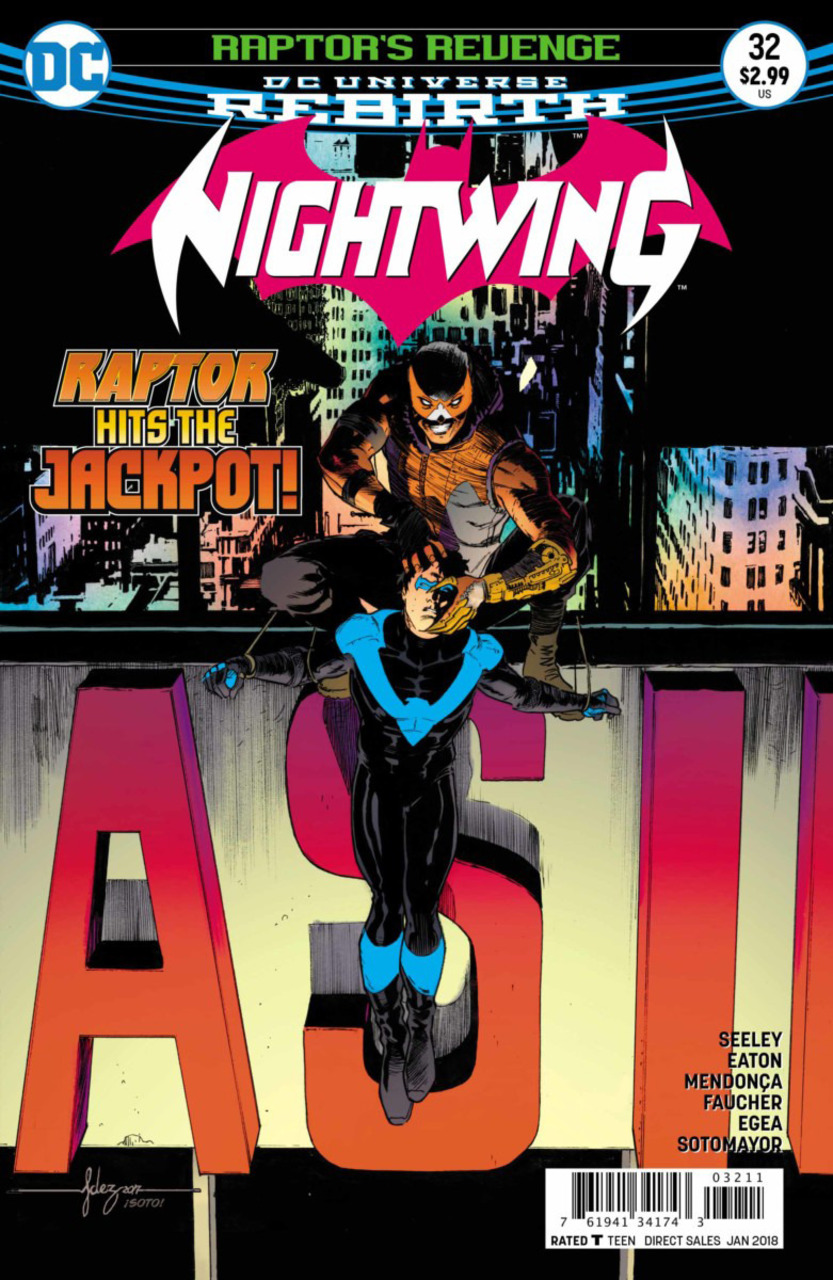 Overview: Nightwing and Raptor talk over a game of Blackjack.

Synopsis (spoilers ahead): The story opens with Raptor narrating over a flashback of the death of Dick Grayson’s parents and an image of Batman and Dick Grayson as Robin.  The story then flashes back to present day where Dick Grayson is working undercover as a Blackjack dealer at Blockbuster’s casino as Raptor sits at his table and the two talk.

In the meantime, Shawn and the Run-offs, having realized that Shawn’s mentor, Pigeon, is working with Raptor, decide to enter the fight against Raptor in memory of the sacrifice made by Giz.

Back at the casino, Raptor talks about what a corrupt city Bludhaven has become and how it mirrors how Dick has betrayed the memory of his mother by following in the footsteps of Bruce Wayne.  Dick counters by telling Raptor how he has pieced together that on the night of his parent’s murder, Raptor ignored the threat that ended up killing his parents by focusing on stealing from Bruce Wayne as Dick’s parents’ trapeze lines were being cut.  Raptor laughs at this as the casino patrons around them start to turn into Blockbuster-like monsters.

Meanwhile, Shawn and the Runoffs recruit Orca back into their group as Pigeon helps Raptor escape the casino.  The issue ends with Dick Grayson changing into his Nightwing costume  on the casino floor as he is surrounded by Blockbuster-like monsters.

Analysis: This issue marks the middle point in the five part finally of Tim Seeley’s run on the title.  The issue slows the action down to have the hero and villain meet face to face and sit down to have a conversation.  It’s a trope that’s worked well in films like Raiders of the Lost Ark, Heat, and The Dark Knight, and it’s a helpful device to clearly define what the hero and villain of a story are fighting about.

For any new readers joining the title, I appreciate how it serves as an easy recap into Nightwing’s origins as Robin, and covers the death of Dick’s parents and his time as Robin in a quick and efficient manner.  It does make me wonder with Rebirth and whatever Doomsday Clock ends up doing to the DC Universe as a whole, if DC is gradually blending the changes they made to things in with the more established history of these characters.  Detective Comics has reverted to the original “Lonely Place of Dying” origin for Tim Drake, but Nightwing’s time as Robin seems to still omit the original Robin costume in favor of the New 52 redesign.

Raptor goes on to monologue about social-political class divides as he judges both Dick and Bludhaven at large for betraying its roots.  Raptor’s dialogue in this scene is eye-rolling.  It’s fine for a character to operate under any particular point of view, but in this case Raptor continues to take every moment of dialogue and turn it into a speech about that point of view and that makes the character feel one-dimensional.  No one talks like Raptor does and the lack of any sort of conversational tone in his dialogue makes him seem less of a fully developed character and as a result, makes Raptor ultimately boring and forgettable.  This is supposed to be a character with a deeply personal bone to pick with Dick and I think it would have been better to drop some of the more thematic elements and just deal with why he is specifically so angry with Dick.

Dick’s own monologue is a better handled, with Dick countering that Raptor’s greed led him to ignore something that ultimately lead to Dick’s parents’ death.  This is a much more interesting angle for the character of Raptor and it’s a shame that Raptor’s guilt and anger over the death of someone he deeply cared about, Dick’s mother, wasn’t more of a focus of this issue.

Shawn and the Run-offs make the very predictable turn back to wanting to get involved and enter the fight.  I find this group of characters to be largely unnecessary.  There was no real reason for the group, and Shawn in particular, to turn away from Dick other then because the writer needed them to do so to isolate Dick and their convenient third act change of heart seems far too predictable.

The art by Scot Eaton and Miguel Mendoca does a decent job with the story and I appreciate that their art styles are in enough sync that the transitions between the two artists is fairly seamless.  I do feel that a character like Nightwing benefits from artist that knows how to draw more kinetic action sequences or play up the gritty crime drama that Nightwing has succeeded in being a part of, like Scott McDaniel or Greg Land back in the 90’s and I am curious to see what happens when Bernard Chang takes over art duties in December.

Final Thoughts: As a grand finale, this book continues to underwhelm.  It just doesn’t feel as large or foreboding as it should be and I think that the blame continues to fall at the feet of Raptor not succeeding as a big enough, or compelling enough, threat for Nightwing.  With two issues left, its double that much will improve before this story line wraps up and a new creative team takes over.