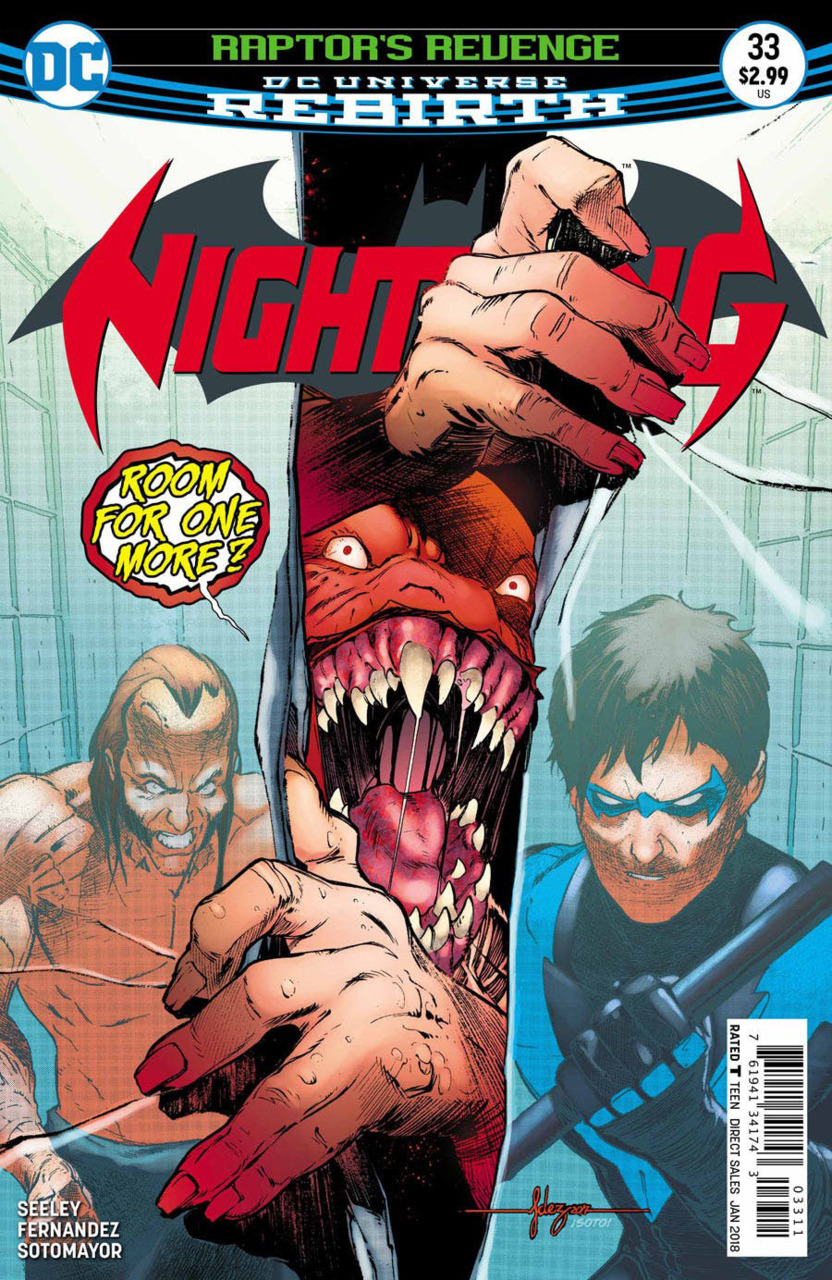 Overview: Nightwing teams with Blockbuster to fight off a casino full of blockbusterized monsters as Raptor puts his master plan into motion.

Synopsis (spoilers ahead): The story opens at Roland Desmond’s casino where Nightwing is fighting off the hoard of people that have been turned into rampaging hulks courtesy of Raptor dosing their booze with Blockbuster’s serum.  Blockbuster himself comes to lend a hand and admits to Nightwing that he had been marketing a version of his serum on the black market that turns its user into essentially a big dumb rage monster and that Raptor stole a shipment.  The monsters spill out onto the street and find that the Run-off’s are on scene to lend a hand in stopping them.  Blockbuster and Nightwing get into an elevator, and just as Blockbuster turns back into Roland Desmond, the top of the elevator opens up like a tin can to reveal a blockbusterized Tiger Shark.

Nightwing then receives a call from Shawn, who warns Nightwing that Raptor has been working with Pigeon and that they are unleashing the Blockbuster serum on the whole city, using an army of nocturnal birds, or as Raptor calls them, “night wings”.

Analysis: This issue sees a marked improvement in the wrap up of Tim Seeley’s time on the book.  The issue is fast paced and action heavy and fits a lot of action into only twenty pages of story.  It’s an interesting choice that Seeley’s made to make Blockbuster not the main villain of the story but still have the story very much revolve around what they’ve established with the character since bringing Nightwing to Bludhaven.  Its also fun to see Blockbuster as a reluctant ally of Nightwing in this story, although I do feel that the team up would have a little more impact if this version of these characters had a little more history between the two of them.

Raptor’s plan to unleash the Blockbuster Serum onto the city of Bludhaven is set up well in his issue, with the casino riot setting up the stakes of how destructive this serum is before the big reveal that Raptor plans on unleashing it on the whole city. The inclusion of a poisoned and monstrous Tiger Shark makes for a menacing threat for Nightwing and Blockbuster to have to deal with as they race to the top of the building.

Now… about Raptor’s master plan.  I’m going to wait and see where this goes and the flock of doom bringing birds is certainly an interesting image to leave an issue on, but I question the use of chemical toting owls as an effective weapon delivery system, and I can’t help but wonder if it the admittedly clever word play will make up for a villain plot that seems a little overly cartoonish and silly.   I also have to question the scene of Pigeon comforting Raptor.  I can’t help but wonder why Raptor would be beating himself up for not having killed Nightwing yet, when he hadn’t even unleashed his master plan.  Wouldn’t Raptor have wanted Nightwing to see the city being destroyed in his name?  It’s as if the moment was put in the story to give Pigeon something to do beside lug crates around and give Raptor a lift in the last issue.

Javier Fernandez’s pencils handle the action in the story well.  I especially enjoy his work with Blockbuster and the other monsters in the story, especially the character design work on the Blockbusterized Tiger Shark.  Fernandez puts a hint of an actual shark into the design which makes Tiger Shark seems more monstrous and otherworldly and makes for a menacing villain for this issue.

Final Thoughts: This issue does a good job of keeping the action going and the story moving.  Although I wonder if the book will stick the landing based on what’s set up here, it’s a fun issue and I enjoyed reading it.