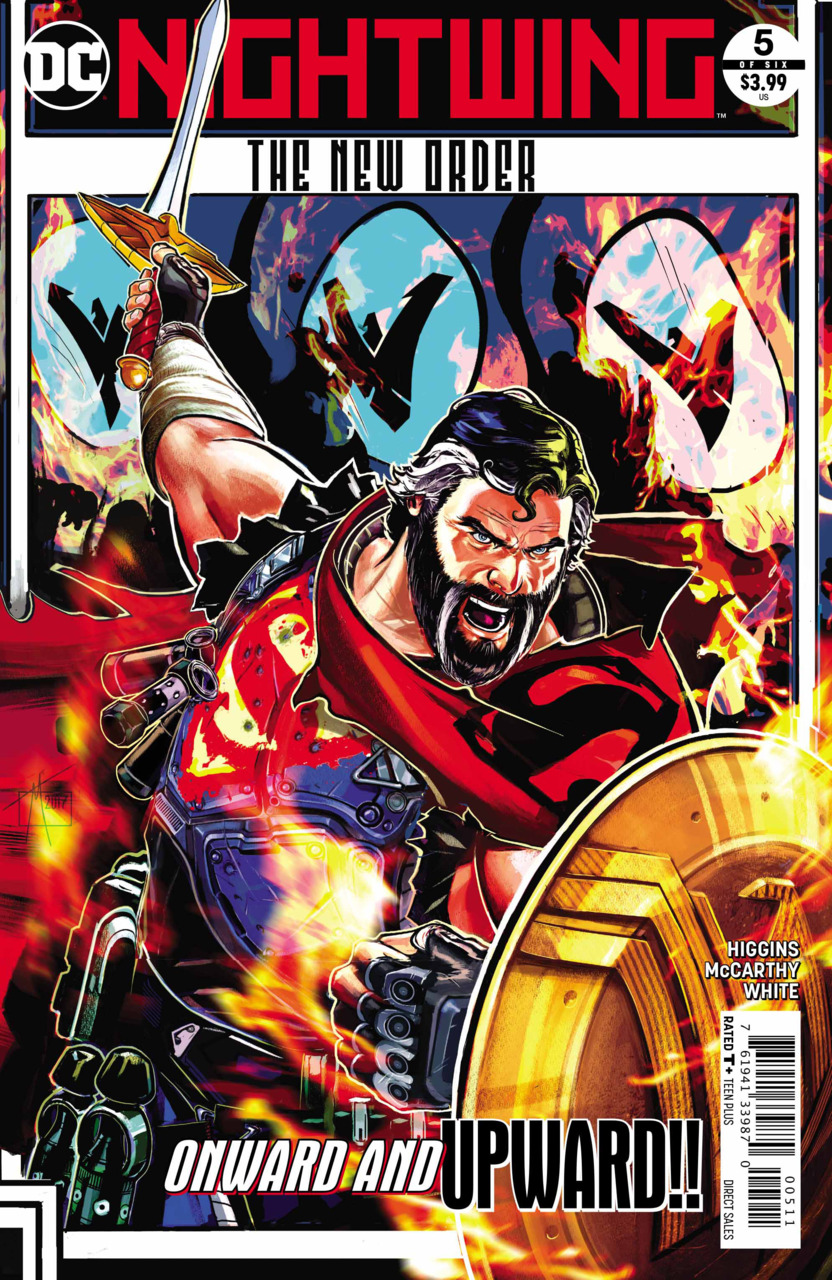 Overview: The Titans steal Jake out from the Crusader’s base and take him to Metropolis, to weaponize his powers and reverse Nightwing’s decision from ten years ago.

Synopsis (spoilers ahead): At the Crusader HQ, Kate Kane grills Mr. Terrific’s younger daughter, Liz Holt for sending the Titans Jake Grayson’s biological information. Before the interrogation goes further, though, the alarm sounds from the Titan’s intrusion to rescue Jake.

In the lab, a huge Mr. Freeze holds off the Titans and promises that Jake is being taken care of well. Blue Lantern Lois and Kory disable Freeze, and the team grabs Jake. However, Wally loses his speed powers because of the darts Freeze hit him with. The team runs frantically, Lois using her enormous willpower to force the Blue Ring to do a very Green Lantern type of explosion. Freeze frees himself, and creates himself a spider form to pursue them. Jake manifests his powers to blast through the door for them, while Liz Holt prevents Kate Kane from sniping the team. Lois lifts the team away in her blue power as Liz is taken into custody.

At the base the Titans plan to take Jake to Metropolis, but Dick says that even though he sees changes must be made to his system, like removing stasis as an option, he still believes that powers are not good for the world. He plans to hide out in a different country with Jake. However, Kori and Jake disagree, wanting to use Jake’s powers to reverse the Metropolis power-drain explosion. To prevent any further conflict, Lois knocks him out.

In a van to Metropolis, Dick wakes up to Jake arguing with Kory. Clearly, the boy doesn’t trust his mother anymore, but does want his father with him despite their disagreement. A gang of thugs surround the van, but Superman, armed with bulletproof costume and mechanical assists for strength, rescues the group. He and Lois kiss deeply, and then Clark welcomes them to his lab with a robot-armed Lex Luthor. Clark speaks with Jake about how he came to work with Lex, and we discover that a mind controlled Superman burned Batman to death with his heat vision.

In a cell below, Dick makes a call to Kate Kane, offering to end the situation for good.

Analysis: The beautifully rendered future world of The New Order is coming to the climax of this story. Higgins has done a good job of setting up all the plot threads for a confrontation between Dick and Jake, but it feels a bit like a dip in tension which seems to be a strange choice for the second to last issue. It’s quite possible that Higgins is trying to setup a sequel as well, but fan reaction, while positive, doesn’t seem like it quite justifies making another ongoing. Perhaps another miniseries, but we’ll have to wait and see. For now, while it’s really great to see this version of an older Superman (and Lois Lane, in some really nicely handled dialogue in their reunion), the story seems a bit oddly paced. Two main beats occur in this issue – the escape from the Crusader HQ with Jake, and the trip to Metropolis to meet Superman and Lex Luthor.

Since Jake is our main perspective character, despite the series being called “Nightwing,” the philosophical argument is pretty complicated. Dick’s call to Kate in the end is framed as a betrayal, with deep shadows. Higgins has been very careful not to paint any of the characters involved as black villains, except possible Mr. Freeze, who acts more as a force of nature than a malicious entity (despite his terrifying designs by McCarthy), but Dick’s actions out of fear and bitterness are framed with much more reservation than Jake’s perhaps naive, but hopeful and positive decision to bring back freedom to use or abuse powers. An interesting choice, given the connection to gun control that Higgins made in interviews when the first issue was released.

The relationships between the characters are still delightful, but not given enough space to really form the core of the series’ appeal, which seems to be more centered on the beautiful artistry of Trevor McCarthy and the conceptual framework of the father/son philosophical conflict. Without that space, the conflict feels a bit thin. Moments like the connections between Jake and Alfred in the first two issues, or Superman and Lois in this issue, are expertly handled, but few and far between. Even the relationship between Dick and Kory, though given space last issue, doesn’t have enough emotion to justify the levels of anger and betrayal that Jake and Dick level at her. All in all, the world of The New Order is carefully designed and lovingly rendered, but needs more emotional power to really make it an alternate universe to be remembered.

Final Thoughts: Higgins and McCarthy continue to bring more characters into their future setting, and setup the final confrontation between Nightwing and his son.