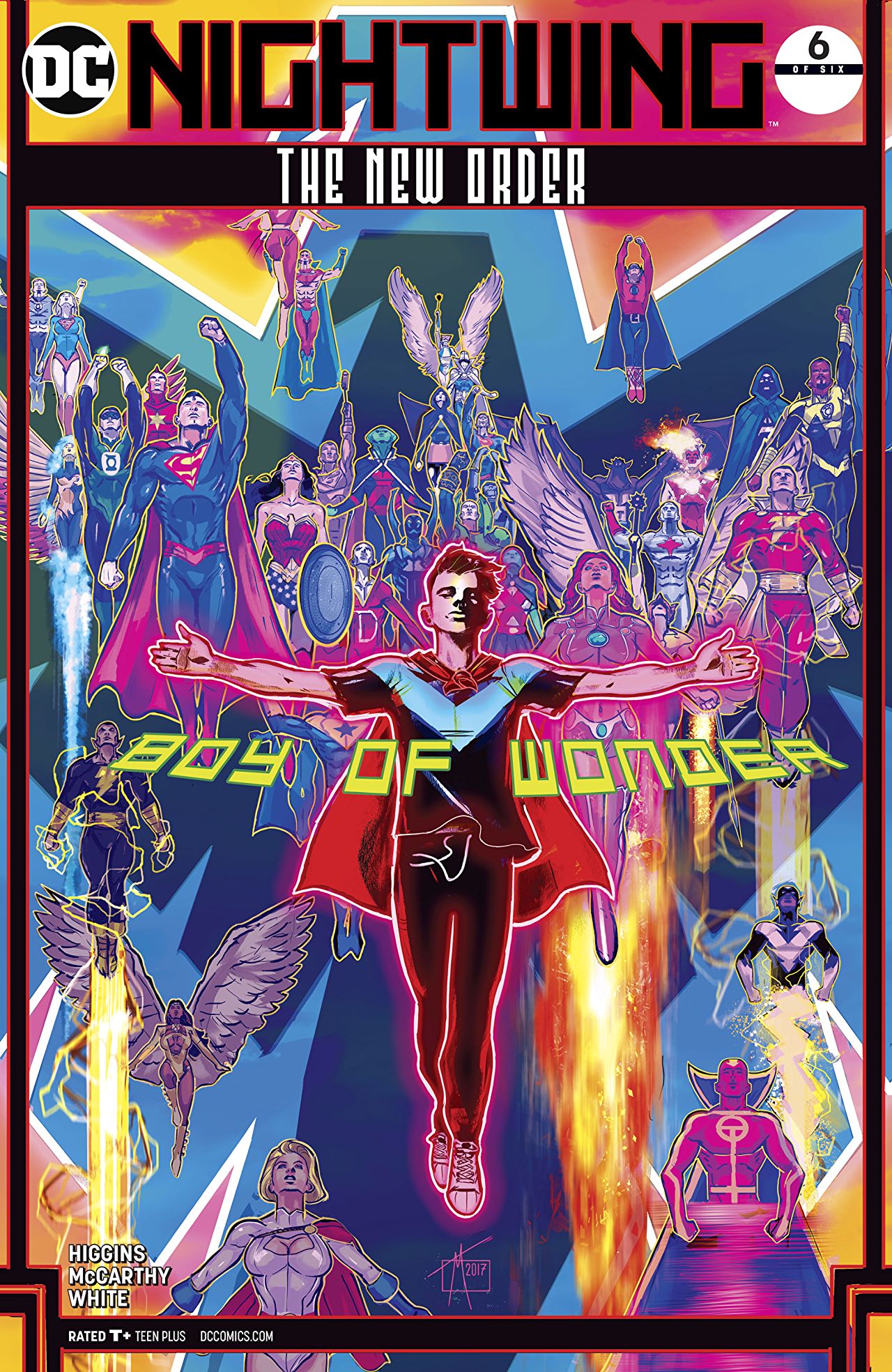 Overview: Nightwing: The New Order hits its finale hard – and how will the world look in the aftermath?

Synopsis (spoilers ahead): In the Metropolis lab of the resistance against Nightwing’s New Order, Jake views a hologram of his father as Robin, fighting Killer Croc with Batman, but is interrupted by his mother, Kory. Still extremely bitter for her abandonment of himself and his father, he turns her away coldly. Kory leaves, and meets Lois Lane (Blue Lantern) in the hall, telling her that time is running out.

Lex Luthor (with a robot arm!) has restored Wally West’s access to the Speed Force after Dr. Freeze’s attack last issue, and hopes that using Jake’s powers and biology can re-power Superman.

Dick sneaks into Jake’s room, and tells him to follow and trust him. They meet Kate Kane, leader of the Crusaders now that Dick is a fugitive, and she’s brought a huge task force, including Azrael (apparently Michael Lane), John Stewart (Green Lantern), Captain Atom, and Brady, the Crusader with a massive chip on his shoulder about Dick. He lets the Crusaders in, and knocks Jake out with a sonic device, giving Kate the plan to take out the resistance.

Kory and Lois are surrounded, but when told by John Stewart to surrender, Lois blasts him out of the building. Lex launches robots to defend the resistance.

Jake wakes up as Dick drives them away, and insists he wants to go back to fix the world Dick broke. Dick snaps, telling Jake that the world was worse than anyone could imagine, and his choice to destroy powers was the only option. He tells Jake that accepting the world with flaws, and not attempting to see it as the world he wishes is part of growing up. Jake cries, and when his father asks why, he says he wishes he could be as good a Robin for his father as Dick was to Bruce.

The massive battle in Metropolis continues, with the Titans holding their own, but Kory knows it’s only a matter of time before one of the Crusader’s heavy hitters breaks through. Dick returns, telling Kory he’s come to accept that even though he may have been right when he set off the bomb, he knows that the world needs powers back now. Wally speeds Jake to the lab, and Lex restores Superman’s powers. However, he reveals that he doesn’t want to return to a world of unequals, and runs away after setting a bomb that will give powers to the entire world – and also destroy the entire city of Metropolis.

Kate and Dick battle, Kate throwing recriminations at Dick for his repeated betrayals, when Superman and Jake fly out of the building and tell the battling forces about the bomb. Superman leads all of the flyers to raise an entire city block which contains the bomb, while Jake uses his newly growing powers to rescue all the civilians. The bomb explodes, but high enough that it doesn’t destroy the city, and no casualties thanks to Jake.

We then see a series of narrated flash forwards, telling us that powers came back because of Lex’s research, though not through his bomb. Alfred’s legacy is the re-legalization of powers. Kate retires, and the Crusaders continue to regulate, but instead of suppression, they train under Liz Holt’s leadership. Jake and Dick worked together to do some of this training, leading a whole cadre of young Nightwings to improve the world around them, until Dick passes away.

We see that the entire series has been Jake narrating his dad’s life for his own son, named after his father, living in a nice, normal neighborhood with superpowered kids playing basketball outside.

Analysis: Though the first half of the series was a bit too slowly paced, and Higgins’ has struggled with the sheer size of the future history and scale of the story he wanted to tell, the finale is very satisfying as a look at the issues of power, responsibility, fatherhood and growing up. It’s also a beautiful love letter to Dick Grayson from one of his lesser-known but most passionate long-time writers, and one of the greatest artists to ever work for his ongoing title. McCarthy’s art in particular will ensure this miniseries a place in fan’s hearts, and Higgins provides a lot of moving moments and directions for this future world. One wonders if Jake Grayson will become part of fan’s ideas of the future of the DC universe as Mar’i Grayson from Kingdom Come.

Particularly powerful moments are, of course, Jake’s ability to save all the civilians from Luthor’s bomb, Dick and Kate’s battle, fraught with all the hurt Dick’s caused Kate over the years of this future, and above all, Jake’s inspiration of Dick by recalling the purpose of Nightwing and Robin – not just trying to change the world for the better – but changing the world with grace as well as passion. Higgins shows in these moments the kind of emotional connection to the characters that made him a shining member of DC’s writing stable at the beginning of the New 52. Hopefully though he has many creator owned ideas, this miniseries will also open doors for more work at DC as well.

Final Thoughts:  Though pacing issues and the scope of the world still create a few issues, Higgins and McCarthy have created a moving conclusion to their alternate future story of Dick and his family.