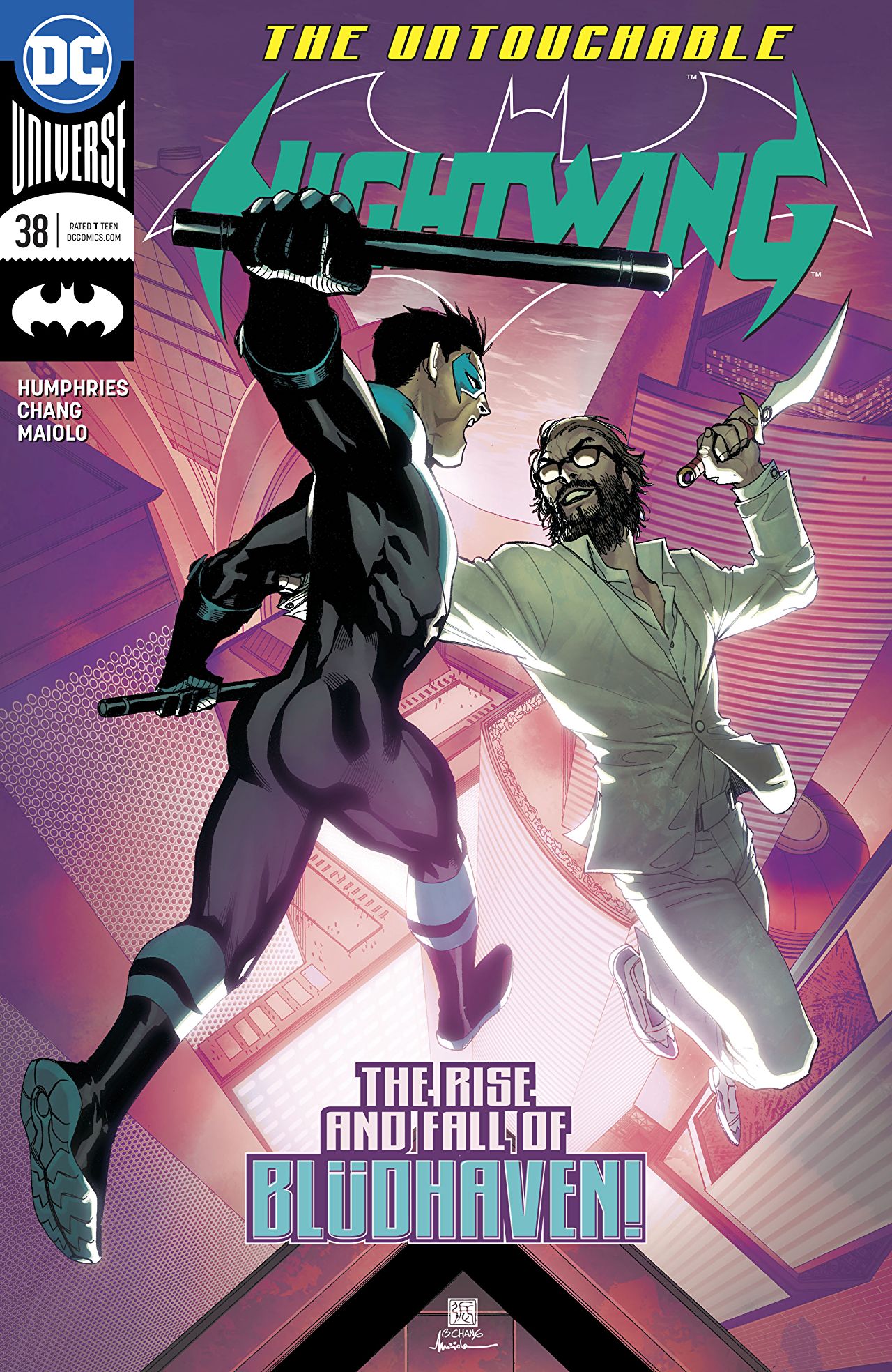 Overview: Nightwing breaks into a casino to come face to face with the Judge.

Synopsis (spoilers ahead): The issue opens with the Judge meeting with two members of the League of Limousine Assassins, who have come to see the Judge to warn him to reopen the Casinos.  The Judge offers them to come work for him, offering them up Nightwing.  Meanwhile, Detective Svoboda tucks her daughter in for the night and leaves, carrying a rifle and speaking of having a job to finish.  Nightwing finds Guppy in his apartment and discovers that he is too late, that Guppy has stabbed his father, King Sturgeon, through the chest and is dead.

Nightwing goes to the Justice Tree, to find that it has been poisoned by an industrial herbicide and that the tree is dying.  Nightwing makes a call to Lucy Weatherton who tells him that the Judge is held up at the Hercules Casino.  Nightwing attempts to break in but finds that the walls of the casino are electrified.  Nightwing has a brief radio conversation with Batman and asks him to make a call to an unknown number as Bruce Wayne.  Nightwing then notices his client from his cross-training gym, Wallace, in line to get into the casino, and after a quick costume change approaches Wallace in line at the Casino and asks him to get him past security.  Wallace makes his money as a stripper and the next page finds Dick Grayson dancing in his underwear at a bachelorette party inside the casino.  After giving his stripper winnings to an old woman who just lost her money at the casino, Dick suits back up as Nightwing and makes his way past the armed guards to the Judge’s penthouse.

Nightwing finds the Judge waiting for him, and as Nightwing holds the Judge up against a window, the Judge sticks a knife in Nightwing’s side, only to be interrupted by Svoboda taking shots at Nightwing from another roof, causing Nightwing and the Judge to take cover.  Nightwing is then ambushed as the League of Limousine Assassins fills the room. As Nightwing is overpowered, the Judge takes off his sunglasses, revealing that his eyes are stitched closed.  The issue ends with Nightwing being knocked unconscious as the Judge looks over him.

Analysis: This issue continues to build on the previous issues, with Nightwing frantically hunting down the Judge as the body count rises.  This story arc has been about setting Nightwing on a collision course with the Judge and the story keeps a steady pace of tension.  There’s a feeling of dread through the story and when the Judge and Nightwing meet face to face, the issue pays off the feeling that something terrible is going to happen.

We get a little more information about the Judge.   I like how writer Sam Humphries keeps laying out breadcrumbs with the Judge, not giving away too much information in any one issue and keeping a sense of mystery throughout this arc. I do find that the reveal that the Judge’s eyes are stitched close is not the shock that I think the book would have wanted it to be, since having the character always wearing sunglasses was always telegraphing the fact that a reveal was coming.  That said, the image is certainly creepy and I like that the explanation is kept to a few panels of the Judge’s point of view of seeing the world as some sort of energy, which does a good job of leaving the reader to wonder what exactly is the Judge’s deal.

One of the things I like the most about Humphries run on the book so far is that he marries a hard-boiled crime drama sensibility with an energetic lunacy that shouldn’t’ work as well as it does.   The very notion of a down on his luck shark-boy should come across as just plain silly, but not only does is work within this story, but I thought the scene of Nightwing trying to convince Guppy to abandon his plans to murder his father and the horror of discovering that he’s far too late is a well executed and emotional sequences.  Another moment, when Dick infiltrates the casino posing as an exotic dancer works well as a funny moment that gives us a break from the drama of the issue without derailing it.   I do have to wonder if Humphries set Wallace up as a character in his first issue for the sole purpose of this gag.

On the art, Bernard Chang continues to impress, and I thought not only does he handle the action well, but I particularly liked his execution of the scene with Guppy, particularly the panel of Nightwing in the background with the silhouette of King Sturgeon’s blood dripping hand in the foreground, which is only elevated by Marcelo Maiolo’s colors.  I do have questions about what exactly is going on in the last page of the book, with the Judge slowly fading out into a field of blue bubbles.  I initially thought that it’s supposed to be water and suggest that Nightwing is being taken to a watery grave, but I’m not entirely sure.

Final Thoughts: This book continues to be energetic and insane and yet still a gritty crime comic.  It’s a fun read.  Go pick it up.