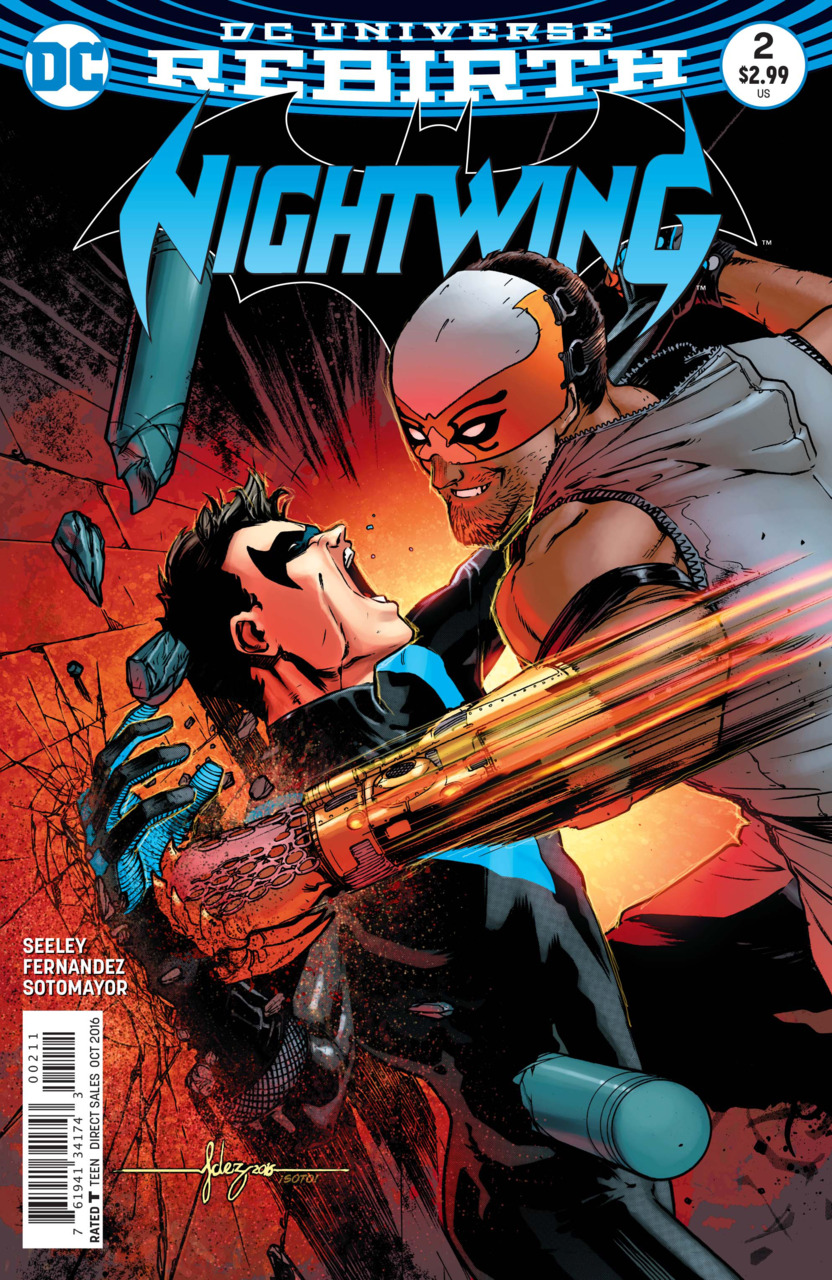 Picking up in Moscow after last issues short fight between them, Raptor, Nightwing’s new “would be mentor” and current partner assigned to him from the Parliament of Owls, and Nightwing are talking. After a bit of a chat they get into Raptor’s rather odd “copter” which looks like something out of a Thunderbirds show and off they go to shut down a Kobra Cult cell. Kobra are a terrorist group of some sort, who “wear scaly pants and worship an age of chaos.” Yes, I keep thinking of GI Joe too.

Cut to Tokyo where Batgirl is beating up on some things in masks. She’s on vacation from Gotham due to “Batwoman’s Bootcamp” (referring to the group formed in Detective Comics) and “the Gotham Twins” (the events in “Batman”).

Meanwhile, Nightwing and Raptor eject from the ‘copter into the sea where they see a shark, whilst Dick Grayson makes some amusing remarks about the “bird-themes” of Raptor’s equipment. Little bit of meta commentary here from the writer. Correct me if I’m wrong but we’ve all heard quips about Batman’s shark-repellent over the years in his utility belt. Well, Raptor has “shark attractant” which he uses to divert into some reptilian mutant people who attack them in the water. I can’t say that this thief Raptor has anything on the real Batman, but I do like the way the two are juxtaposed, given Nightwing’s relationship with each.

There’s an interesting narration from Nightwing as he compares Raptor’s fighting style to his own, as they hold their own against the scaly fish-men. who attack them in the water. Raptor is “kind of freestyle rap battle”, while Nightwing says he’s been likened to jazz, “disciplined but not adverse to improvisation.” Cool description.

They get onto the Korba-held ship in the middle of the ocean. There’s some nice chemistry between the two and some jokes about branding. On the platform, they fight  a particularly gross genetic experiment and then uncover a whole boatload of refugees “from the bones of Greece” in the bottom of the ship. Then it all becomes clear that Raptor is there to deliver these people to the Parliament of Owls. One of the refugees recognizes that Nightwing is a superhero, a brand extension of the Bat. It’s that branding and legacy value which is helped or hurt by Nightwing’s actions.

Nightwing and Raptor are called back to the Parliament, the refugees delivered to them. Dick Grayson is finding out a primary cost of going undercover and what you have to do to not break cover. Like selling the lives of those refugees into whatever misery the Parliament is cooking up. Raptor lectures him about the long game. He says there is something he has on the Parliament to bring them into the light. He “always plays the long game”, and off he goes in his Thunderbirds helicopter.

Cut to Barbara Gordon, who has invited Dick Grayson on a date in Toyko. But he’s not showing up this time. Instead he is just staring out at the horizon and the text Babs sends him. Sad the way their dislocation is, I like the way Babs and Dick Grayson they are connected however loosely, their relationship alive on their phones, even if they are a world apart.

Raptor shows up and picks Nightwing up, and together they fly off, on the next mission.

Another very good issue. I’m highly enjoying the art with it’s edge of grittiness that seems to suit the character of Raptor. The comic doesn’t feel too crowded. Dick Grayson and the mission are up front, Babs is floating around the edges, on her own mission too, closer to him than anybody else. He lives a compartmentalized life. I very much am enjoying this arc and this title.