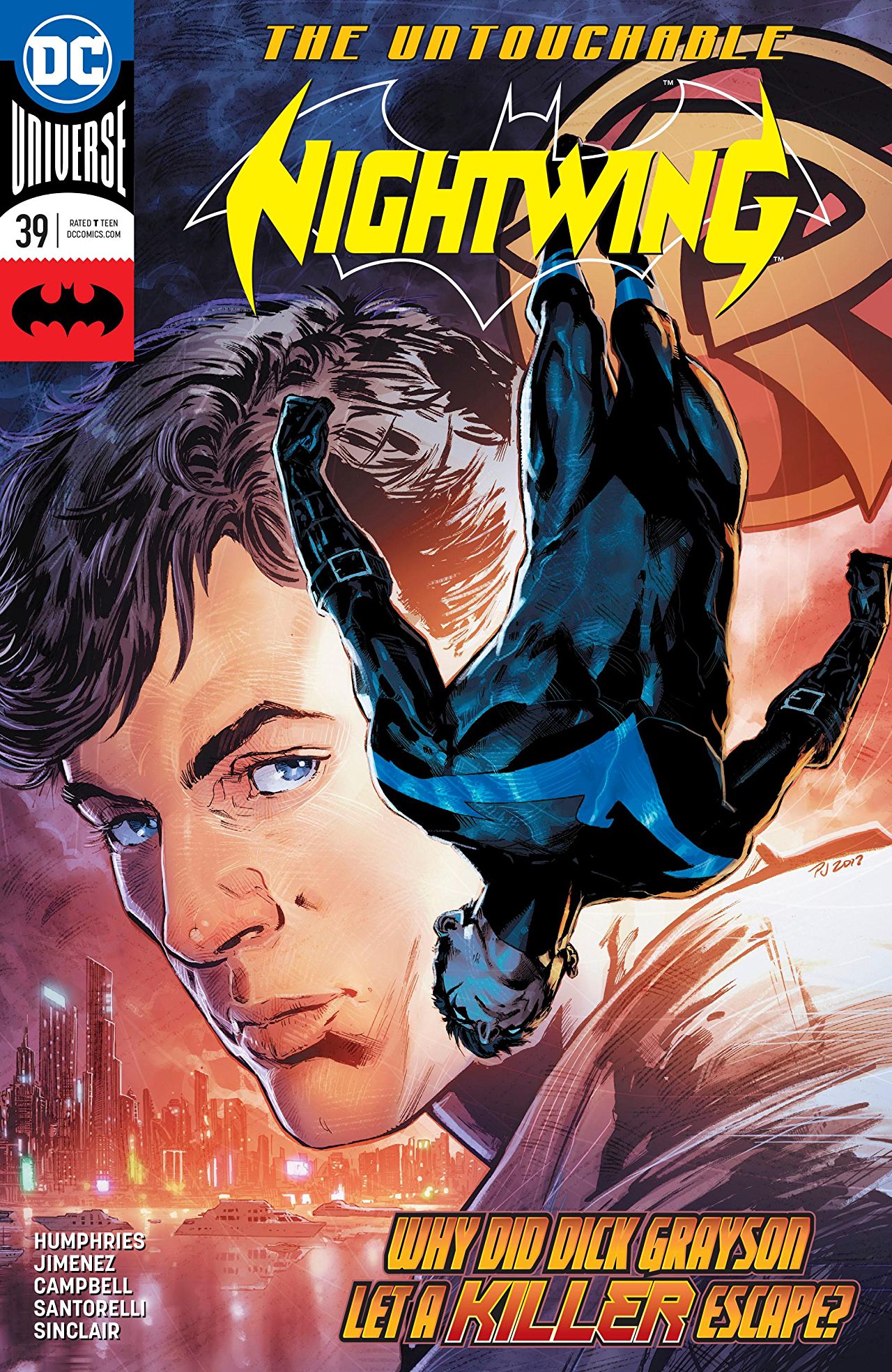 Overview: A captured Nightwing remembers the second time he faced off against the Judge while he was in college.

Synopsis (spoilers ahead): The story opens with Nightwing tied to a chair in a flooded housing project, with the water level up to Nightwing’s ankles and the Judge sitting face-to-face with Nightwing in a rowboat. The story then flashes back to Dick Grayson‘s college days at a time when Dick had left the Teen Titans and was studying for a semester at the Bludhaven College Law School.  A scream leads Dick to a classroom were several students lying bloody and dead with another student holding the knife, talking about having been promised something. Dick tries to bury himself in the studies of Bludhaven’s first Court Judge, Jacob De Witt but ends up researching a local legend, “The Sea Butcher”, who is storied to have terrorized children’s dreams for hundreds of years killing people and leaving only a trail of salt water footprints.

Grayson goes to investigate wearing a night makeshift costume made up from his workout clothes, following a trail to a warehouse by the harbor, and finds that the Judge has returned and is making a deal with the local drug dealer. Dick interrupts the deal and chases the Judge on to a ship where they fight and the Judge once again escapes over the side into the harbor and disappears. A despondent Dick returns to the Justice Tree where he speaks with Starfire over the phone, who tells him not to be so hard on himself.

Back in the present day, the water in the room has risen to Nightwing shoulders. The Judge reveals himself to be Jacob De Witt, the First Judge of Bludhaven.  The story then flashes back to the 1600s where the Judge talks about how he tried to convict an aristocratic of murder and was then chained and thrown into the water. The Judge states that he was transferred by the water and granted some sort of immortality and that he could now have some sort of sight that see the hidden corruption of the world around him. The Judge watched the City of Bludhaven grow and change throughout the centuries and stated that he found himself at Saint Jude’s monastery.  The Judge states he was taken in by the monks and it was there that he stitched his eyes closed and made a commitment to only see corruption until he rids the world of it.

As the water rises and Nightwing struggles to keep his head above water, the judge then reveals that Lucy Weatherton had been working with the Judge to lure Nightwing to the to the hotel in the previous issue. The issue ends with the Judge leaving as Nightwing is trapped under the water still chained to a chair.

Analysis: This issue brings in the focus the remainder of the backstory between Nightwing and the Judge that’s been hinted that throughout the story arc as well as revealing at least a possible origin for the Judge.  What I’ve liked about the story so far is that it does a fairly good job of setting up the Judge as a piece of unfinished business from Dick’s past and the story has been successful at showing that there’s a lot of bad blood on both sides.  That being said, having now seen what seems to be Dick’s entire history with the Judge, I do question why Dick would carry so much baggage with him over feeling responsible for the Judge’s actions. This flashback, in particular, feels like a fairly minor event.   There were a series of murders and the guy gets away and while I can see Dick beating himself up over not bringing the Judge to justice,  it doesn’t really explain the sense of urgency that he has throughout the book. I don’t feel that these events were big enough to really effect Dick in this way. I feel like something more tragic or horrible should’ve happened in the past to explain Dick’s current frame of mind.

That being said there’s a lot that I liked about the issue. I love that Sam Humphries seems to really have a handle on the history of the character and I enjoyed the subtle touches such as text messages from people that would’ve been in his life at the time such as the Titans and Barbara Gordon. I couldn’t help but appreciate how they managed to fit in the 1980’s Disco Nightwing outfit in a way that felt organic and made sense in the modern world and it’s a fun nod to Nightwing’s history.

As for the origin of the Judge, it’s an interesting idea to tie him to Bludhaven’s earliest days. I do hope that if this is indeed the Judge’s origin, they make it a little clearer about how exactly it is that he has been alive for hundreds of years because simply being thrown overboard doesn’t quite cut it. I don’t feel that keeping it vague and leaving the notion unexplained really helps this character.  The same goes for the Judge’s….corruption vision?  I’m still not sure what the deal is with that or if the Sea Butcher is a concept that has anything to do with the story or if it was just page filler.

Final Thoughts: I’ve enjoyed this story arc so far, despite having issues with the reveal of Nightwing’s history with the Judge.  I’m interested to see where things go from here.  I can’t help but be a little disappointed that this is going to be Humphries only arc since a new creator has just been announced for the title.