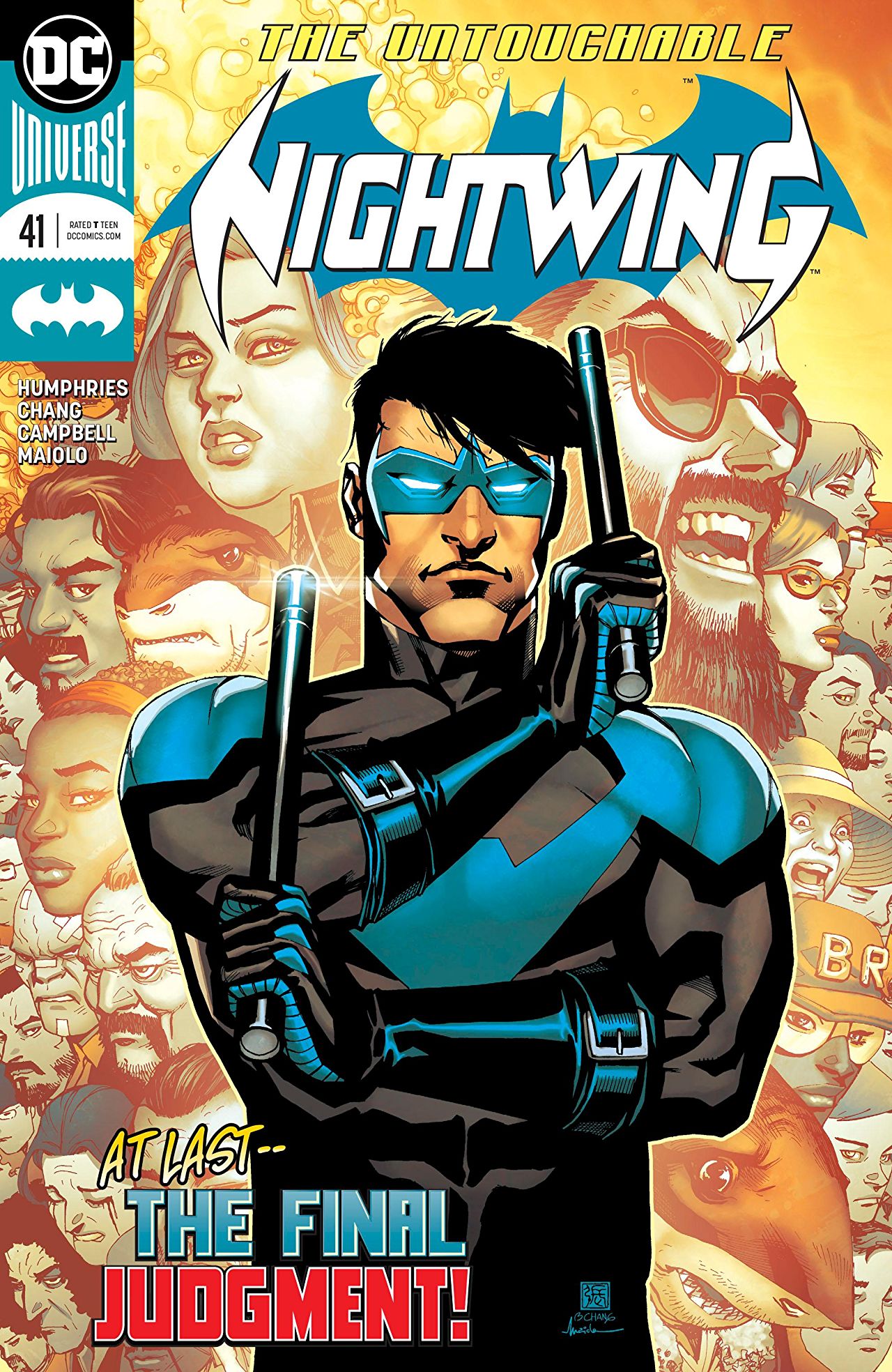 Overview: Nightwing faces off against the Judge for the fate of Bludhaven as “The Untouchable” storyline comes to a close.

Synopsis (spoilers ahead): The story opens with Guppy being visited in prison by an unseen visitor.  The story then flashes back twenty-four hours to the penthouse Silver Spring Casino, where the Casino owner, Justin Holderman is sitting on a bed holding a bomb that is about to explode.  Nightwing, still riding his motorcycle from the previous issue, grabs Holderman and crashes through a window as the penthouse explodes.  Nightwing throws out a line to a nearby construction crane and swings clear, carrying the weight of himself, Holdeman, and his motorcycle and crashes into a nearby hotel room.

Nightwing then uses the same construction crane to lift up the Judge’s limo into the air and Nightwing and the Judge face off as the crane swings through the air over the harbor.  The Judge pulls a gun on Nightwing and is shot in the shoulder by a sniper-rifle-wielding Detective Svoboda, causing him to drop his gun.  The Judge offers Nightwing a golden chip to let him go back to the sea and as Nightwing looks at the fallen chip, he looks up to see that the Judge has disappeared.  The Judge is shown to have dived into the water, and as he swims down through the harbor and is followed by Nightwing, who overpowers the Judge and drags him back to shore.

The story then flashes back to the present where Guppy’s visitor is revealed to be Nightwing.  The Judge is shown to be locked up in the subbasement of the prison.  Lucy Weatherton is named the head of the Bludhaven Gambling Commission, as she scrapes gold paint off of a regular casino chip and Detective Svoboda tucks her daughter into bed.  Guppy remarks how Nightwing is able to forgive others who betrayed him but not himself and Nightwing swings off to the Bludhaven Justice Tree.  A city worker talks to Nightwing about how Bruce Wayne wrote a blank cheque to save the tree and gives Nightwing a potted seedling from the tree.  The story ends with Dick Grayson training his clients at his gym, with the seedling planted in the field across the street.

Analysis: When Frank Miller did his famous run on Marvel’s Daredevil in the 1980’s, there were plenty of story ideas and elements that Miller tried to bring in that were rejected by editor Dennis O’Neil, citing that they were “Too Batman.”  I kept thinking about this story as I read this story, which in hindsight, seems to be a bit “Too Daredevil”.  There have been many comparisons between the two characters, both are acrobatic vigilantes who fight crime with their wits and a pair of billy clubs, and I think that Nightwing has, since the mid 90’s, clearly taken some inspiration from his Marvel counterpart, but I think in looking back at the story in its entirety, I cant help but wonder if this story has been a bit too much of a funhouse version of Daredevil’s world, right down to the choice to make the villain a twisted blind lawyer obsessed with corruption.  Even on the surface, there are moments in this issue, like Nightwing pulling a grappling line out of his escrima stick, or the ending themes of Nightwing falling and having a to get back up again, feel more like Daredevil moments then Nightwing and I feel this book lacked an editor to reign these ideas in a little because they come off as being a bit derivative, like the cover band version of a hit song.

The Judge is disposed of fairly easily in this story.  It’s a shame that there isn’t really any moment in this story where Nightwing really is confronted with being tempted with anything that the Judge has to offer.  I think that the big problem is that on its face, there isn’t anything that I think the Judge would realistically be able to offer Nightwing that he might be tempted to accept, as Nightwing is usually portrayed as someone who just wants to do the right thing and help people.  I think that the Judge and his powers would have been better served as more of a side villain in another story, where to solve a larger problem might require making a deal with the devil and as it stands it feels like a lot of story potential was wasted.

I also feel that Nightwing is far too understanding of Guppy enjoying his celebrity status in prison, telling Guppy that he isn’t a murderer.  Yeah, Guppy… you kind of are a murderer.

That all being said, there is a lot that I enjoyed about this issue and the story arc as a whole.  I love the touches that Sam Humphries and Bernard Chang brought to Dick’s status quo, from setting up a new civilian identity to the potential of a new villain that knows Nightwing’s secret identity in the manipulative Lucy Weatherton, who seems to have been playing her own game to gain control of gambling in Bludhaven the entire time.

Bernard Chang and Jamal Campbell have both been solid throughout this arc.  While I would always prefer to have a single artist on an issue, I found their styles to compliment each other and I didn’t find the transition between the two pencillers to be jarring.

Final Thoughts: Despite some elements that I found to be too derivative of other work and some story gripes, I really enjoyed this run on the book and I think that Humphries and Chang put a lot of elements in to play. I’m disappointed that those elements probably won’t be paid off as the book goes forward with a new creative team.