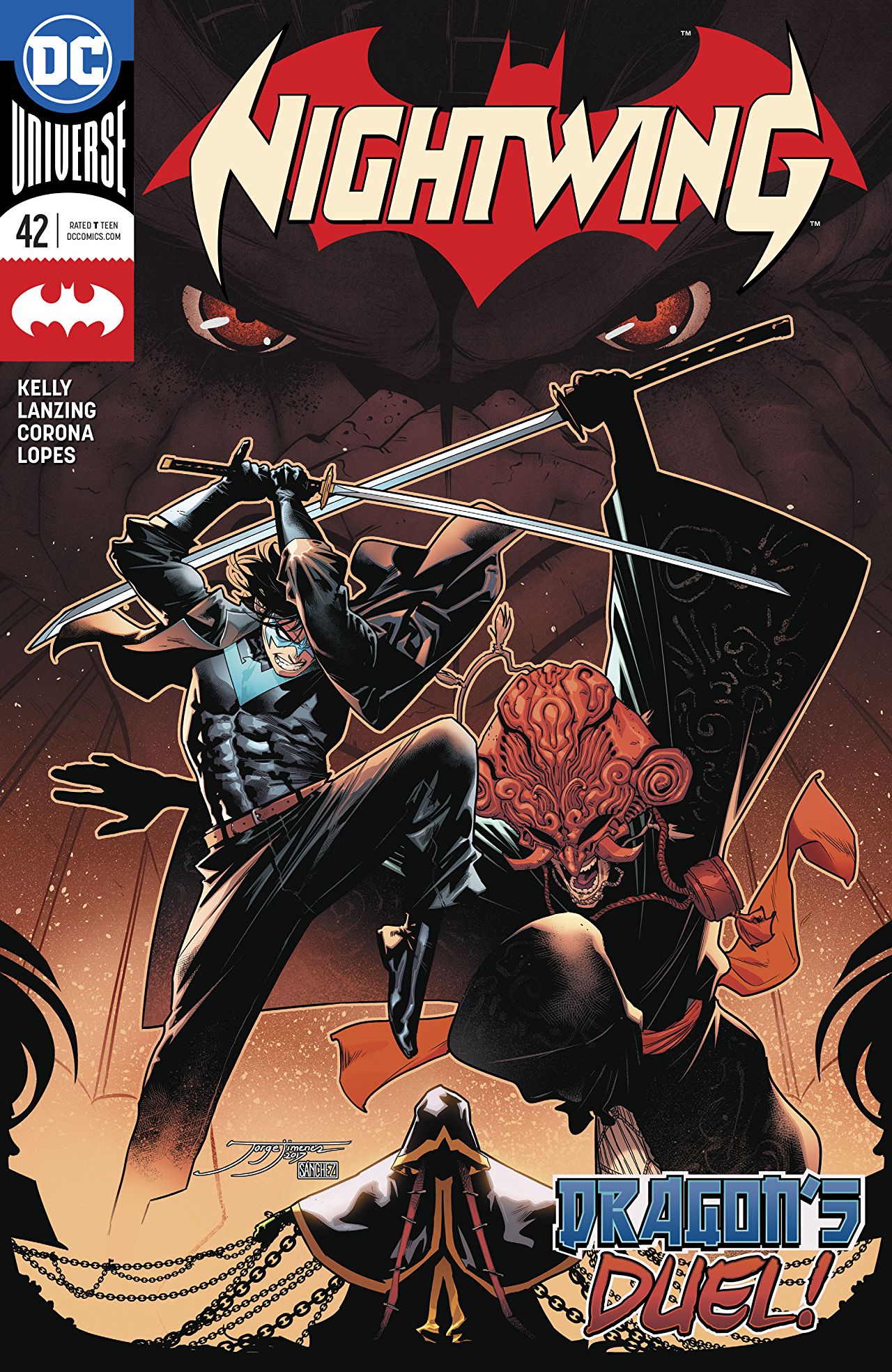 Overview: On vacation in Japan, Nightwing must battle through a building of thugs to rescue Robin.

Synopsis (spoilers ahead): The issue opens with Nightwing, wearing a suit and tie over his costume, with his mask in place, walking down the neon streets of Tokyo.  Nightwing enters a room and begins fighting a gang of red mask, dark suit, tie-wearing thugs that call themselves “The Crimson Kabuki”.  Nightwing makes quick work of the thugs and climbs a staircase, leading him to another room where a Kabuki drummer attacks Nightwing with a sonic drum.  Nightwing hits the drum with his Escrima sticks and the drummer is taken out in a sonic blast.

At the next level, Nightwing faces off against a “dancer” with a pair of deadly fans and after her defeat climbs to the next level where he then squares off with a warrior in a demon mask.  Nightwing makes it to the roof, where Robin is in chains, being held captive by the leader of the Crimson Kabuki, a man named Kyu who wears a dragon mask and wields a katana blade, while a dragon circles overhead.  Nightwing and the man cross swords, with Nightwing managing to free Robin who then joins the fight.  Kyu is defeated when the dragon turns against Kyu and Nightwing finishes him off.  The issue ends with Nightwing and Robin back in the Batcave with Batman, where Robin repeats the opening narration of the story, telling it to all of his pets, which now includes the dragon.

Analysis: We are in that weird period right now where the last creative team has finished their run and the next team doesn’t start for a couple issues.  In the meantime, we have this filler issue by writers Jackson Lanzing and Collin Kelly with artist Jorge Corona.  They’ve decided to tell a very martial arts cinema inspired story.  They openly reference Game of Death and Bruce Lee and you can feel the love that the writers have for everything from The Shaw Brothers to more recent efforts like The Raid and Quentin Tarantino’s Kill Bill in the pages of this short issue.  I like the idea of putting Nightwing through this kind of filter and I think that Nightwing is the perfect character for this type of story.

That being said, this issue is all kinds of confusing.  It’s the sort of issue where it feels like the writers got far too caught up in referencing their favorite movies and the story lacks a lot of detail that would have made it a better story.   Nightwing isn’t given any sort of reason to be wearing a suit and tie over his costume in this story, for instance.  The writers’ seem to want to make a particular reference but either are not concerned or don’t have the time in the story to set it up in a way that feels organic, so it just comes across as a “that’s weird” moment.

I think that the story would benefit from having being fleshed out over the course of a few issues because as it stands, there are too many questions.  Primarily among them, what is the deal with that dragon?  Who are the Crimson Kabuki?  What’s Nightwing doing in Japan?  What was Damian doing in Japan?  The story tries its best to answer these questions by giving a bedtime story like narration by Damian that runs over the book, but I still feel that it could have been better fleshed out.

The art by Jorge Corona does a decent job of matching the tone of the story that the writers are trying to tell and does a good job of invoking the decidedly Japanese flavor into the story. That said, I do find his anatomy to be a little too cartoony for the tone of the story and I do wish they had gone with an artist that would tell an already abstract story a little straighter.  The book feels so surreal; for instance, I found it difficult to tell if the dragon at the end was supposed to be symbolic or was actually flying around the roof of the building.

Final Thoughts: This is a story that is a better idea for a story then it is in its execution.  I can’t imagine what someone who’s never read an issue of Nightwing before would think about this story if they leaped onto the book for this issue.