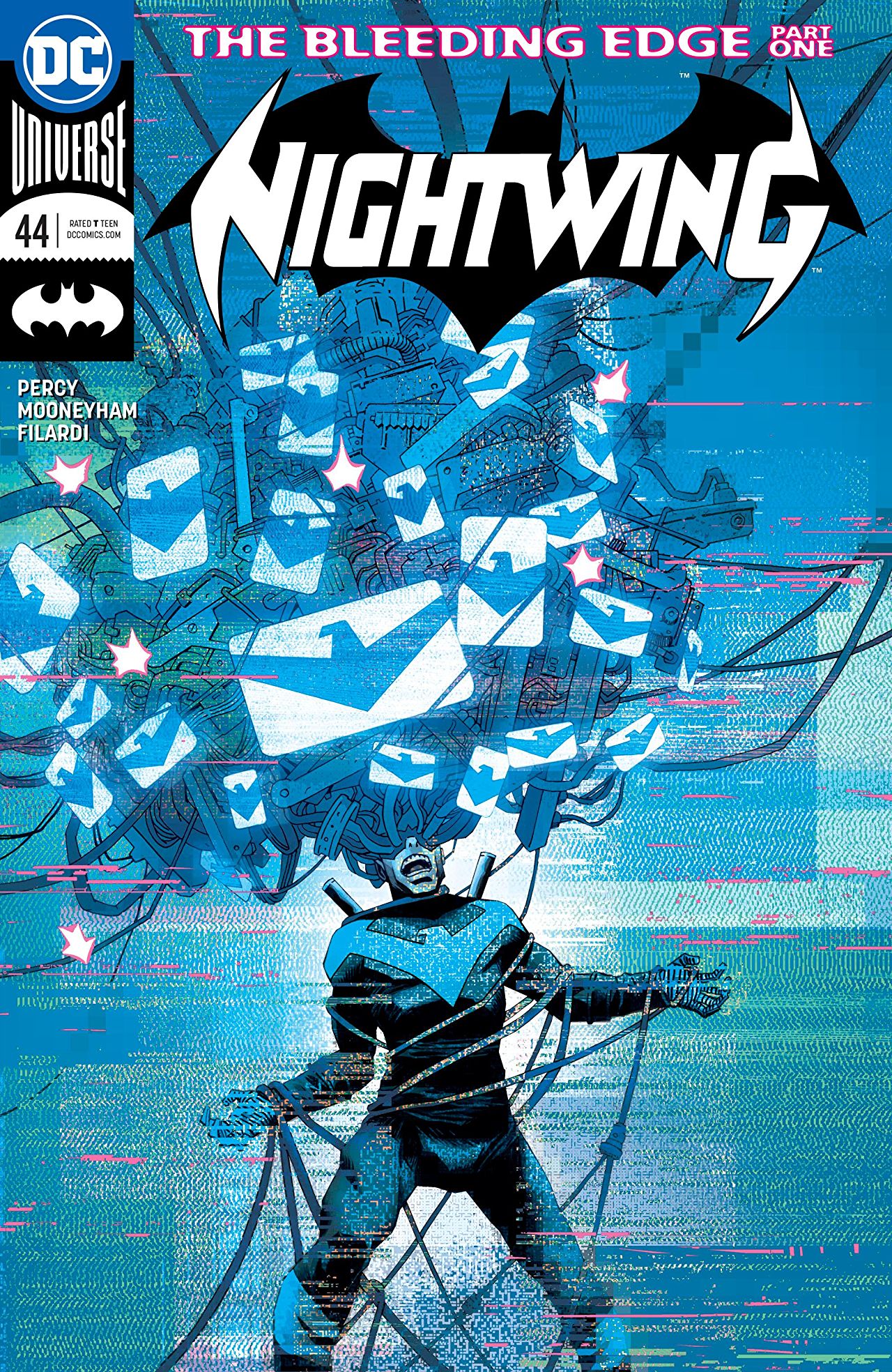 Overview: As a new kind of virtual reality gains popularity in Bludhaven, Nightwing investigates a new threat that uses the technology as a weapon.

Synopsis (spoilers ahead): The story opens with Dick Grayson zipping a jacket over his Nightwing uniform as he heads down into the Bludhaven subway system.  Dick boards the subway as a green glowing skull appears on a man’s phone on the platform before it explodes in his hand, killing him.  Before Dick can react, the subway operator’s phone detonates and the train rockets out of control.  The lights go out on the train and Dick uses the darkness to change into Nightwing as the other passenger’s phones on the train begin to glow.  Nightwing uses his batons to knock all the phones, detonating them at the end of the train car.  Nightwing has all the passengers hold on to him as he fires a grappling line from his baton and swings the passengers to safety out of the train car.

At his apartment, Dick has a conversation with Barbara Gordon about how an unknown threat has weaponized cellphones before meeting a new cross training client at a scrap yard.  The new client, Willem Cloke, has a mechanical left eye and hand and is concerned with privacy and tells Dick that he wants to be stronger.

Afterwards, Dick goes to a local deli for a sandwich and the owner shows off an electronic device on his wrist called a “Controller” that he uses to project a hologram of a far more upscale storefront over his run-down deli, explaining that it is a new augmented reality project that the city is calling “Phantasm” to virtually gentrify poor neighborhoods.  Dick wonders who is paying for this program before rushing off after being alerted over the police radio to a possible homicide.

Nightwing meets with Detective Svoboda over a dead body clutching a knife.  Svoboda explains that police got a call for a man holding his girlfriend hostage by knifepoint, and after opening the apartment door and finding a man holding a knife and shooting him, find his girlfriend denying that there had been any problem.  Nightwing notices the same controller device on the dead man’s wrist and no indication as to who called the police.

Nightwing takes the “Phantasm” unit from the dead man’s apartment and takes it back to his apartment to examine it.  Dick puts the controller on his wrist and finds his apartment holographically changed into Wayne Manor complete with Alfred.  The digital Alfred then changes into a glowing green figure with the same skull face as the image that appeared on the exploding cellphones.  Without warning, the controller device sprouts legs like a spider and crawls along to Dick’s chest where it burrows itself under Dick’s skin.  The issue ends with Dick screaming as his eyes start crackling with electricity.

Analysis: This issue, marking the start of the new creative team of writer Benjamin Percy and artist Chris Mooneyham, packs a lot of story into twenty pages and there are some interesting ideas presented.  As a society, we increasingly live our lives in the digital world and there are a lot of interesting places to go in having an story examine this still relatively new and constantly changing part of the human condition.  I can’t help but wonder, however, if Nightwing is really the character to explore these ideas with.  The story makes the decision to make Dick Grayson something of a luddite (Barbara even calls him that at one point) and has him resisting modern technology in favor of landline for instance.  Dick Grayson has never really been that kind of character.  Even if you ignore the fact that he is Batman’s protégé and leader of the Titans and since a young age has been surrounded by the sharpest part of the cutting edge of technology, he’s also a young man in, at best, his mid 20’s.  This is someone who would have grown up in the ever-expanding world of social media, and I have a hard time buying the trouble he has in excepting it.  It’s a fine idea for a story, but I can’t help but wonder if the story would have been better suited to a less “techy” hero like Green Arrow or an older protagonist like Deathstroke.  I’ll bet any amount of money Superman still has a landline.

I also feel that the story doesn’t adequately explain why Dick is down in the subway in the first place and there were more organic ways to have him run into the threat of a subway bombing without him randomly being down in the subway.  Was he supposed to meet someone?  Did his car break down?  The story isn’t clear.  As for Dick’s new client, I think it’s a bit on the nose to have a mysterious new cyborg suddenly come into Dick’s life.  It goes without saying that Cloke is going to figure into this story somehow and only time will tell how that’s going to play out.

That being said, there are a lot of nice character moments in the story.  Barbara Gordon makes a very welcome appearance in the story.  Percy has a good handle on the chemistry that these two characters have always had when they get a moment together and I enjoyed seeing it here.  I also have always been a fan of the logistics of being a superhero.  Having Nightwing deal with having to hide his uniform under tearaway pants or muse about how Batman makes it all seem so easy as he awkwardly changes clothing in an alley are nice touches to the story.

As for the art, there is a Jim Aparo-like vibe to artist Chris Mooneyham’s style that I think suits the more grounded crime focused tone that I think this title is going for.  I do think that the opening action sequence suffers from not being as kinetic as an acrobatic character like Nightwing should be, but that might be more to do with too much going on in a short number of pages.  This is my first exposure to Mooneyham’s work and I’m interested to see how he handles similar sequences in the book going forward.  Also a standout for this issue is the John Romita Jr. variant Nightwing cover, which makes me wish they could nail him down for a story arc on Nightwing.

Final Thoughts: This story had some interesting ideas and some nice character moments.  And while I’m not sure if this story is one that is particularly well suited to Nightwing, I’m interested to see where things are going.