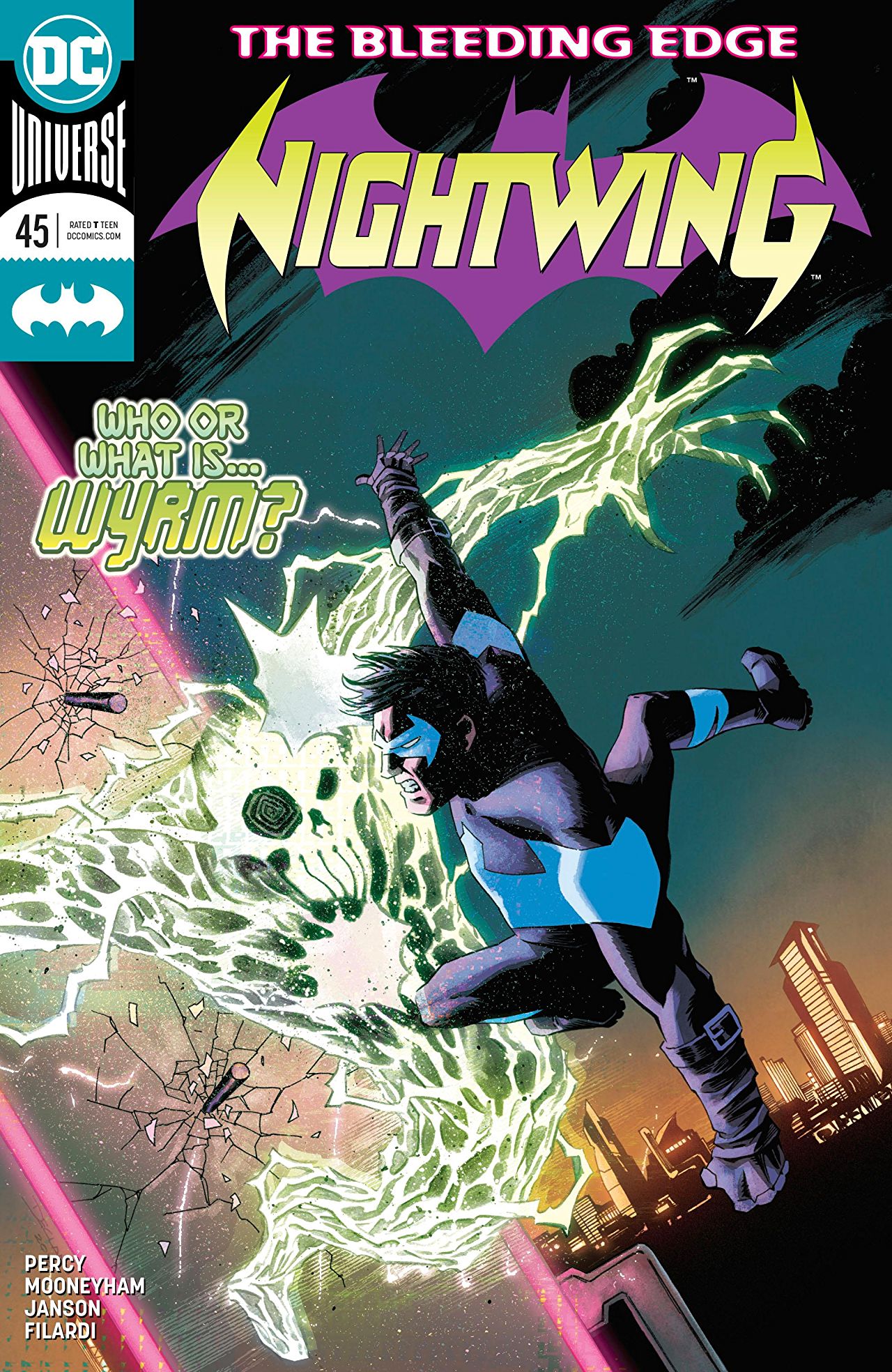 Overview: Nightwing wakes to find himself in bed with Barbara Gordon with no memory of the previous night, as the new technological threat to Bludhaven grows.

Synopsis (spoilers ahead): Dick Grayson wakes up find that he is late for an appointment with a client and more importantly, to find Barbara Gordon naked beside him nursing a hangover.  Dick can’t remember anything about the previous night, and as he rushes off to his appointment promising Barbara that they will talk later, only to have Barbara be revealed to be some sort of digital creation once he’s gone.

A family in a low-income building receives a new VR Phantasm box as the devices are being given out to every household in Bludhaven.  The delivery man is attacked by a Russian gang, only to find themselves victims of their cell phones exploding.

Dick meets with his client, the apparently cybernetic Willem Cloke and takes him through a work out swimming down at the Bludhaven Docks.  Dick’s swim is cut short when he finds a sunken corpse in the water.  Dick speaks with Detective Svoboda and finds out the dead man was a police informant who has turned up dead after all his personal information found its way online.

After a change of clothes, Nightwing calls Batgirl, who is in the middle of a fight with a toad monster, asking her to research the tech company that funded the rebuild of the subway that got bombed in the last issue.  Nightwing tries to talk about the previous night, with Batgirl stating she has no idea what Dick is talking about, with Nightwing not able to remember anything about the previous night.

Dick returns to his apartment to find “Barbara” waiting for him, who turns into a glowing skull-faced digital monster and the two of them fight.  As the creature chokes the life out of Dick, the spider-like device that crawled inside Dick’s chest in the previous issue crawls out of his mouth, with the monster stating that he is looking forward to learning all of Dick’s secrets.

Analysis: In his second issue, writer Benjamin Percy seems to have a good handle on Dick Grayson as a character.  As I stated in my previous review, I don’t totally buy Dick Grayson as someone who shuns technology, but having it fleshed out here, I do think it’s an interesting take on the character, and it fits the new life he has made for himself as a personal trainer/crimefighter in a run-down area of a run-down town.  I also enjoyed the neural download countdown that runs through the book, as it builds some tension that something bad is going to happen by the end of the book.

I also have to call out the “Barbara” moments that this issue opens with.  As fake outs go, it’s thankfully a pretty mild one and I like that the writer respected the readers enough to let them in on what’s going on early in the issue.  What I liked about the moment, is that in Dick’s mind, he actually acknowledges that this is something that he actually wants which is something that DC has a habit of dancing around.  I also like the way Percy writes Babs’ dialogue, even fake and hung over digital Babs, and I’d like to see her as a permanent fixture in the title, although I doubt that this is in the cards.

The issue does suffer from some pacing issues, specifically when Dick is running to meet his client, and the book could have done with fewer panels of Dick running as his inner monologue recaps the last issue and feels like wasted time that could be spent moving the plot along.

I also can’t help but notice that the villain plot of this arc, a new entertainment device that is being distributed throughout the city is, in fact, a way for the villain to extract personal information and uncover secrets is essentially the plot to Batman Forever.  I’m not saying there’s anything wrong with that, out of all the Batman movies directed by Joel Schumacher, Batman Forever is…  the one that’s not Batman and Robin. But this is totally the same plot.

The art in this issue, by Chris Mooneyham, gives the book an 80’s Frank Miller feel that I think works for the title, which is only enhanced by the fact that half the book is inked by longtime Miller collaborator Klaus Janson.  I think Mooneyham is growing into this book and I look forward to seeing how he progresses over the next issue.  I also have to call out another stellar variant cover by John Romita Jr, who be an amazing fit for a future Nightwing story.

Final Thoughts: I enjoyed this issue, which I found to build well on the last issue and I’m looking forward to the next one. Also, I may want to go watch Batman Forever now.