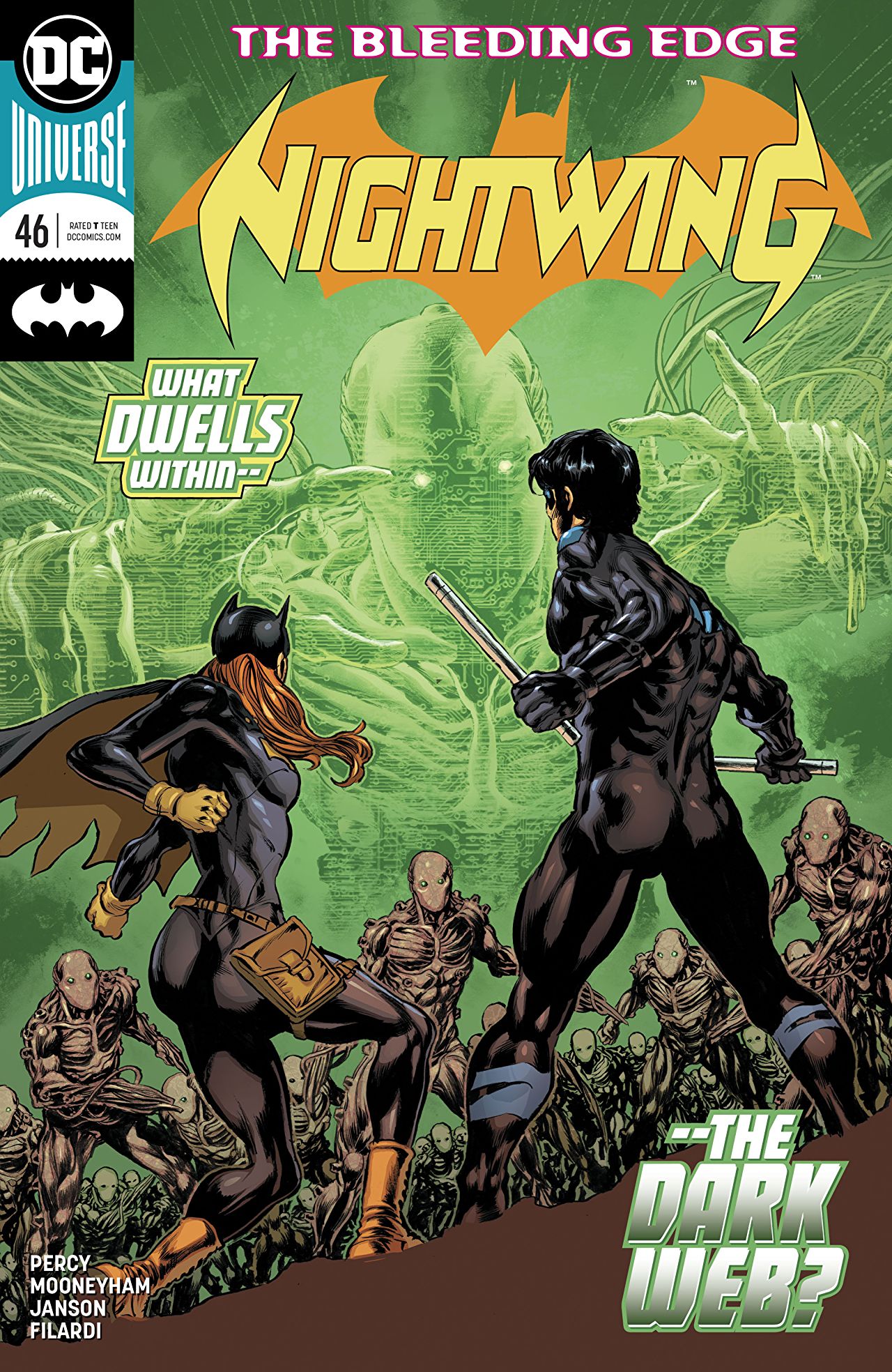 Overview: Dick and Barbara investigate the shady origins of a new tech company that’s trying to insert itself into every corner of Bludhaven.

Synopsis (spoilers ahead): Dick is in his apartment fighting the projection that calls itself Wyrm. He grabs the mechanical controller that had been inside his head and runs to the projection system to try and beat Wyrm by removing the source. He manages to land a blow on the device and it seems to stun Wyrm enough for Dick to jump out of his window and be caught by Batgirl. They land on the street where they are confronted by multiple projections of Wyrm who tells them he’s become part of everything tech related in Bludhaven. Batgirl and Dick make a quick escape by dropping into the sewers where there is no connected digital network. Batgirl fills Dick in on the origins of the company that makes the Phantasm projection devices and what their most recent plans have been. Dick brings Batgirl to his own personal mini hideout underground. He discovers that the mechanical controller he grabbed earlier is no longer in his hand. Batgirl then sees something moving in his cheek and uses a taser punch to hit it.

Elsewhere, a local judge is watching a news story about compromising videos that have surfaced about his personal life. He puts a gun to his face and kills himself as a projection of Wyrm looms over him.

Back at Nightwing’s hideout, he regains consciousness and finds himself dressed in his costume with goggles covering his eyes. Batgirl explains to him that the goggles allow him to switch between seeing reality and virtual reality as well as acting as an inhibitor to the controller that is lodged near his brain stem. Batgirl does some quick detective work to find a connection between the three deaths that have happened recently. She finds that they were all in the same ninth grade class along with Willem Cloke.

The mayor of Bludhaven is giving a speech in the warehouse district to introduce Willem Cloke, the head of Mirage, as the person who will spearhead Bludhaven’s techno-urbanism revolution. Nightwing surveys the situation from a nearby rooftop as Barbara assess things in disguise on the ground level. Nightwing sneaks into a building and uses his goggles to see some android looking things siphoning data from a data-bank. Meanwhile, back at the location of the speech, the Russian Sisterhood makes their presence known by pulling out guns and threatening Willem and others. Nightwing drops right into the middle of the android looking things that call themselves the Terminals.

Analysis: Something with this story just doesn’t sit right with me. I did enjoy the first issue of this arc, but I think a large part of the problem for me is that so much of this story is so utterly implausible while trying to be serious. I dig the 80’s futuristic cop drama/Blade Runner aesthetic, and I think the underlying theme of technology being dangerous is one that is worth exploring, but how this issue has executed things just hasn’t resonated with me. The way the technology works seems really contrived and forced. I know that’s a weird thing to say about a comic universe that has a cyborg using teleportation tubes, but this kind of tech feels like it would be more a part of a Batman Beyond story. I want to read a story about how society has become too absorbed by the promise that technology can grant their heart’s desire. I want to read a story about how technology can be used as a tool for mass surveillance. Unfortunately, this story didn’t get me to contemplate these things because I can’t get past how unrealistic some of the stuff is. I think a more grounded plot with more realistic elements that explore these ideas would fit a Nightwing book better.

Another weak point so far is the main antagonist of the story. It’s presumably Willem Cloke trying to make Bludhaven “better” in a twisted way after some trauma in his past. In any case, I think this story has taken a hit by almost exclusively being told from Nightwing’s point of view. It could benefit from taking a look at how the spread of these devices is affecting the lives of everyday citizens and it could also show how the villain is taking this data and using it to serve his or her own personal interests.

Another thing the story could benefit from is a short time boost. It seems like all these massive changes are happening within a few days when a month is a more realistic timeline. I know time can often be a weird thing in comics, but a short header of “one week later” and altering a few things would give the story a little room to breathe. Speaking of time, I have no idea how Batgirl was able to catch Nightwing falling out a window when she was just in Gotham on the phone with him a few minutes earlier.

I mentioned earlier that I enjoyed the gritty aesthetic that Mooneyham creates with this story. The colors are appropriately subdued to match this. I’m not sure why, but there is a second artist that handles a few pages in this book. It’s obviously noticeable because it’s two different artists, but I think Sharma did a great job in trying to make the story flow consistently visually. The transition didn’t take me out of the story at all. Going forward I’d like to see more detail and more of Bludhaven’s personality in some of the backgrounds similar to the first issue in this story arc.

Final Thoughts: A story about the dangers of technology and mass surveillance that doesn’t really live up to it’s potential.