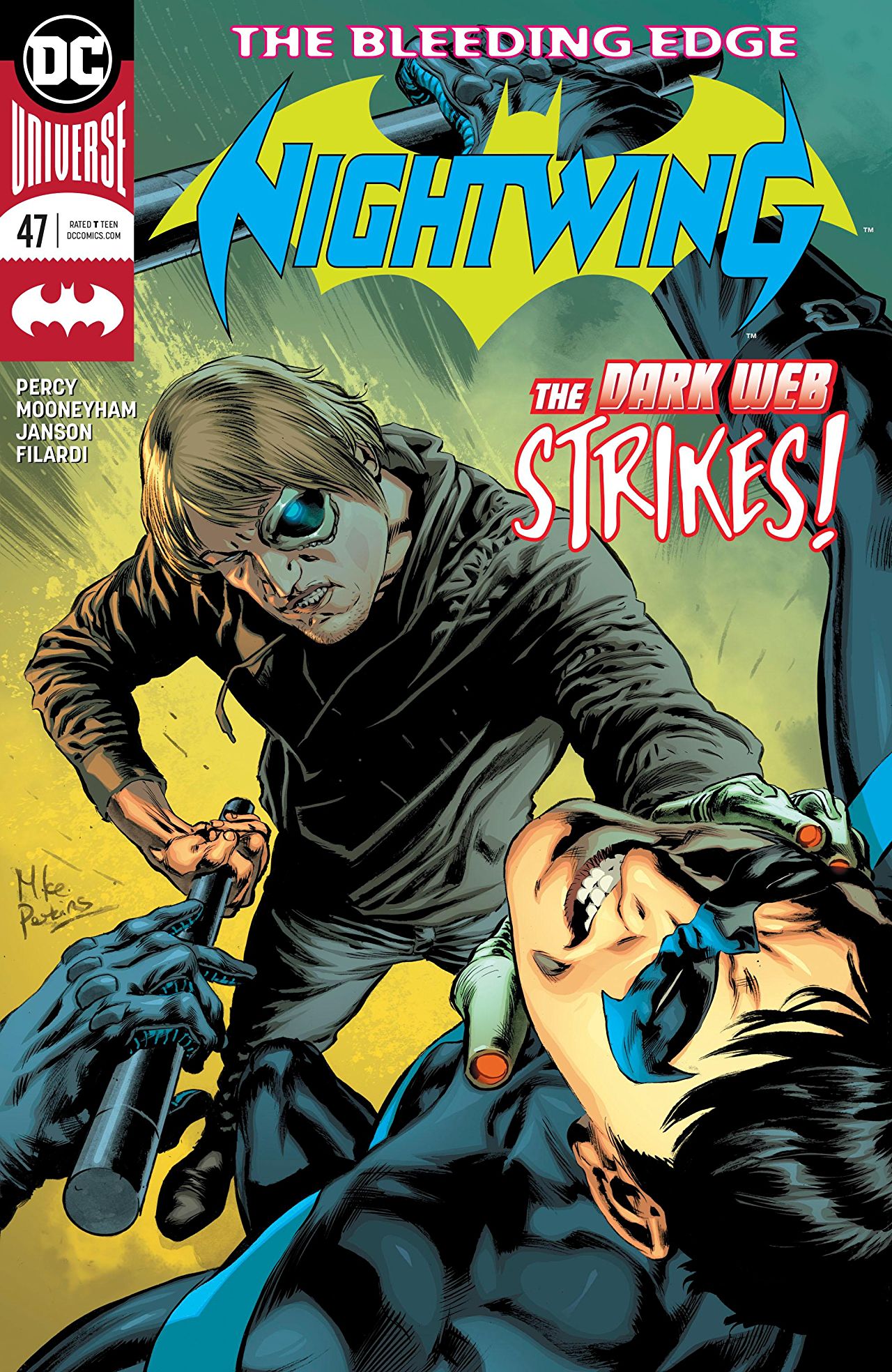 Overview: Nightwing and Batgirl try to get to Cloke only to discover that he might not be the person who is really pulling all the strings.

Synopsis (spoilers ahead): Nightwing is fighting off an attack from the Terminals while the Russian Sisterhood tries to take control on the ground outside. Willem Cloke foils their attack by re-configuring the controllers that all of them are wearing. As pandemonium breaks out, Barbara changes into her Batgirl costume in an effort to break things up. She instructs the leader of the Sisterhood to “cut the cord” on their devices and the gang members shoot off their own controller devices. As Cloke flees the scene, Nightwing arrives and is being pursued by the Terminals.

Once Cloke is away from the action, he’s confronted by a projection of Wyrm who says that Nightwing is the perfect target because of the many connections he has to all the different superheroes. As the Terminals close in on Batgirl and Nightwing, Batgirl uses an EMP grenade to shut down everything within a fifty-yard radius and the heroes take off after Cloke.

The trail leads to a subway station and Nightwing asks Batgirl to hang back because he wants to try and appeal to Cloke’s humanity. Cloke throws a bomb at Nightwing and tries to run away but falls onto the subway tracks. Nightwing is able to save Cloke with a little assistance from Batgirl. Cloke reveals that someone wants him to hack Nightwing’s mind but he instead decides to show the heroes about his past and how he sustained his injuries. Cloke says that Wyrm used his own desire for revenge against him. As he’s saying this, Batgirl’s phone repeatedly buzzes. She picks it up but almost immediately drops it as Wyrm somehow emerges and drags Willem into the phone.

Analysis: In my last review I talked about how I found it really difficult to get into the story because of how the tech was so unrealistic. I’ve been wondering why this is an issue for me since we frequently accept crazy, outside the box stuff in comics and I think I figured it out. I find it difficult to reconcile the unrealistic nature of the tech with the more serious commentary the story is trying to make about very real stuff in our world. A lot of the concepts mentioned in this issue (for example; targeted advertising, digital intelligence, virtual reality, Trojan viruses hidden in emails, etc.) are very topical to our modern world and I think the story would have benefited from a little more realism to unpack these concepts. I’m still not sure how a person gets sucked into a phone.

The tech isn’t the only issue here as a lot of the tech-related puns don’t really stick the landing for me. There are also a few plot inconsistencies that were really confusing. First, how does Nightwing deduce that Gotham is Wyrm’s next target based on Cloke disappearing into a phone? Second, Barbara uses an EMP with Nightwing standing right next to her but it somehow doesn’t knock out his virtual reality goggles. Third, if Batgirl had the EMP grenade the whole time, why didn’t she use it before telling people to essentially shoot themselves in the arm? I couldn’t stop myself from asking these questions as I was reading and it distracted from a lot of the action.

The one redeeming aspect of the issue for me was the dynamic Nightwing and Batgirl have while working together. The way they work as a perfect team really reminds the reader that these individuals have great work chemistry and not just romantic chemistry. I also liked the idea that Nightwing is Wyrm’s target because of his affiliations with so many heroes over the years. It really illustrates the versatility of the character and shows that his ability to forge relationships with so many people over the years is one of his greatest strengths.

The art in this issue was merely okay in my opinion. I felt like the pencils were a little too heavy and the shadow and texture was a bit incomplete and inconsistent. I also want to mention that this issue was the final issue in the story arc but it doesn’t really have any semblance of a conclusion. I assume this story will pick up again at some point but, based on the solicitations, it will probably be after the next story arc.

Final Thoughts: An action-packed issue filled with tech-related puns, plot inconsistencies, and technology that pushes the boundary of belief. It’s ostensibly the finale to the “Bleeding Edge” story arc but doesn’t conclude it in a satisfying way.