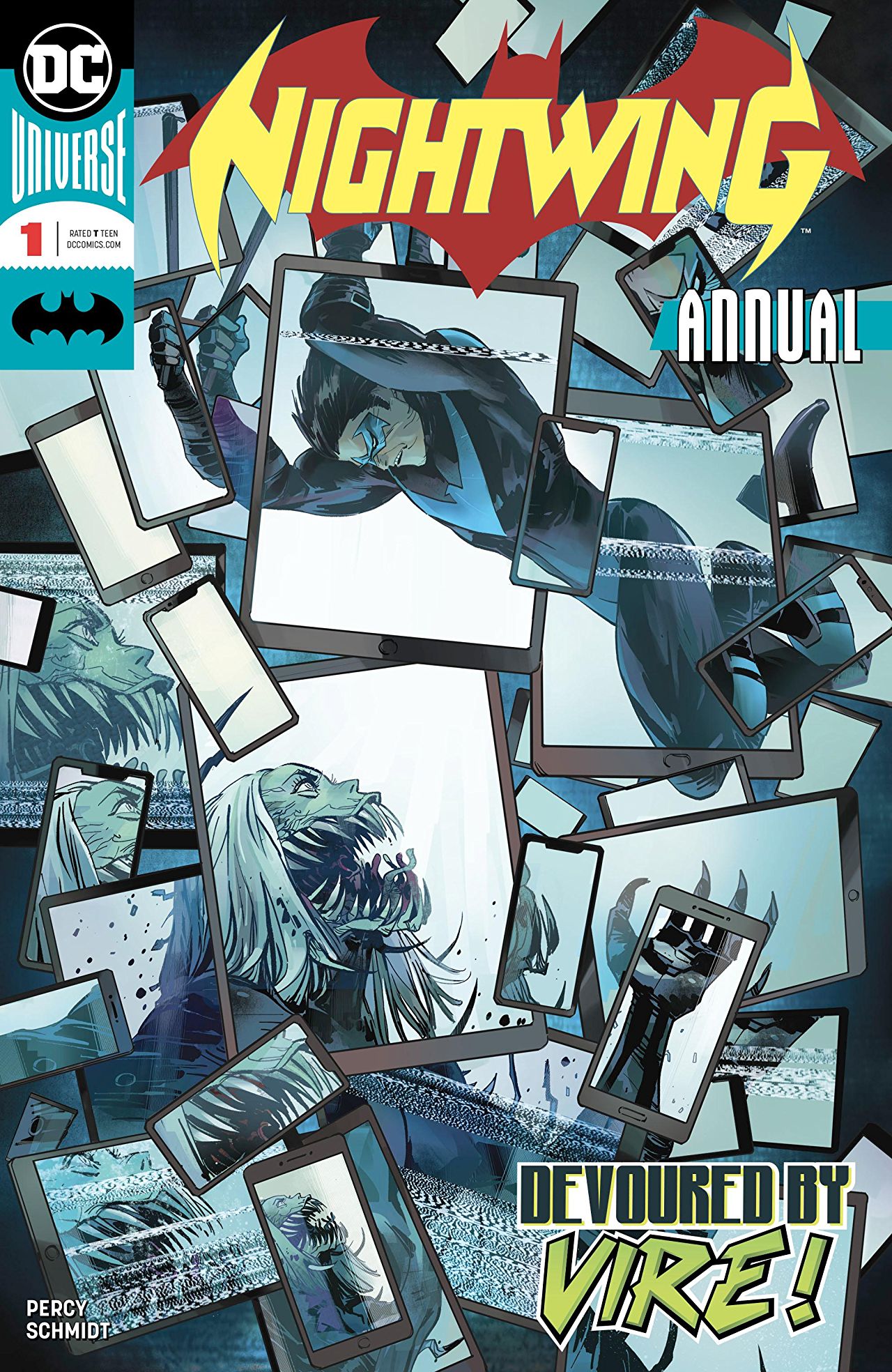 Overview: Nightwing, Batgirl and Vicki Vale try to unravel the mystery of Wyrm and the Dark Web while a newcomer named Karna Shifton seizes control of the news.

Synopsis (spoilers ahead): At the Clock Tower, Barbara surgically removes a phantasm controller from Nightwing’s body. Barbara decides to keep the controller to examine it later.

A week later, Nightwing makes an appearance at Gotham Four News offices at the invitation of Vicki Vale. Vicki explains that the news station is having problems every time they try and write copy or broadcast because it appears like they’ve been hacked. Nightwing explains that there is always a way in and realizes that one of the interns is a Terminal who is causing the problems. Nightwing tries to pursue, but the Terminal evades capture.

Elsewhere, Karna Shifton makes her grand entrance by hijacking all the screens in Gotham and declaring The Feed as the only news source people will need. By the next morning, The Feed has taken over and replaced all the newspapers and digital news outlets in Gotham. Nightwing has another conversation with Vicki about how difficult it is to fight this enemy, but they conclude that a good first step is finding Karna Shifton.

Nightwing hunts for Karna through the streets while Batgirl tries to find her online. Meanwhile, Karna is interviewing citizens of Gotham and getting them to divulge their darkest secrets. In his hunt, Nightwing spots a hooded figure spray painting graffiti mentioning Wyrm and interrogates him for information. The person reveals themselves as a Terminal and tries to escape, but is quickly hit by a truck driven by Batgirl. The truck is actually a mobile Batcave that Batgirl is giving Nightwing to operate from. The truck also comes with some special features that include a new high tech motorcycle for Nightwing to ride when he needs to get someplace quickly.

Meanwhile, Karna Shifton shows up at Vicki’s office with a couple of Terminals and asks Vicki to tell her everything. While this is happening, Nightwing and Batgirl are dissecting the Terminal back at the Clock Tower. They finally get to the “brain” and it employs some mild self-defense booby traps that Nightwing easily gets rid of. He makes a suggestion to Batgirl that they use a neural blockchain to defend against Wyrm trying to get their secrets and Batgirl says she will work on something.

Nightwing heads over to the Gotham Four newsroom after getting a call from Vicki saying she has a big lead. When he arrives, he finds Karna delivering a broadcast to smear Nightwing’s reputation. Nightwing tells her it didn’t work because she is broadcasting on a closed loop. Karna transforms into a monster and attacks. Nightwing reveals that he lied, the feed is broadcasting live and Karna outed herself as a monster to all of Gotham. Karna then shows Nightwing that she has kidnapped Vicki and she is in the same digital prison as Willem Cloke. Wyrm makes an appearance and threatens that Nightwing must do something for the Dark Web or his friends will die.

Analysis: This was a really hard review to write because I’ve enjoyed other work from Percy and Schmidt and I enjoy their presence on social media, but this issue wasn’t good at all. I could write pages about the many things I didn’t like in this issue, but I will try to be brief. We are several issues into this storyline and we still don’t have a clear idea of what the Dark Web is after. We have a general idea that they are trying to sow seeds of distrust and create unrest in society, but the way they go about doing this comes across as extremely forced and heavy-handed. In this issue alone, Karna Shifton manages to completely take over all media in Gotham in one day and we are expected to believe that the people just accepted this meekly. The citizens of Gotham come off looking like mindless sheep who are so gullible that they will believe anything they hear. There are legitimate commentaries to be made about how media shapes people’s perception, but the way it’s handled in this story makes it completely unbelievable. Karna seemed to be an interesting character at first, she’s kind of an unholy amalgamation of Alex Jones and TMZ, but she seems destined to disappear entirely too soon. I would have been far more interested if she was a human journalist who was using the situation to push an unethical brand of journalism in a more subtle way. It would have been a good opportunity to contrast Vicki’s expert, professional journalism with Karna’s clickbait style.

I also could not figure out why Nightwing wasn’t wearing the goggles Batgirl made for him in the previous issue. If he knows he’s fighting the Dark Web, wouldn’t it be useful to have goggles that identify Terminals? And since this whole problem with the Dark Web is so fundamentally related to technology and Nightwing is a self-professed technology hater, wouldn’t it make more sense for Batgirl to take the lead in this investigation? She has arguably the most proficient computer skills of anyone in the Bat-Family (I also haven’t forgotten that Tim Drake also exists even if others have), so it really doesn’t make sense for Nightwing to be the lead here when there is someone more qualified available.

Nightwing also has a new ally in this fight as Vicki Vale makes an appearance. It’s nice when supporting characters from Gotham pop up, but I do not understand why it was necessary to have Nightwing flirt with Vicki. The flirting and dialogue between them isn’t even done well and there’s a particularly cringeworthy panel where Vicki tells Nightwing about how they are so great because they sacrifice so much for people. Heroes who really sacrifice for people never talk about themselves as martyrs sacrificing for the public’s good; they just selflessly do it. As for the flirting, there’s an internal monologue from Nightwing where he mentions that flirting with Vicki is “especially fun and naughty” because she once dated Bruce. I think that’s so far out of character for Nightwing to say at this point and it would be a bizarre thing for anyone to say in general. But hey, we probably don’t have to worry about this anymore because Vicki has gone to the same magical prison that holds Willem Cloke.

The one sequence that really shines in this issue is when Batgirl gifts Nightwing the truck. While I didn’t like the part of Nightwing’s monologue that referenced Bruce and Vicki, I thought it was nice to see him talk about how much he cares about Barbara. Similarly, it was also nice to see how thoughtful Barbara was in designing the gift for Dick even if some of the special features (unhealthy cereal) were a little corny.

I love Otto Schmidt’s art, but I thought this issue was a little below his usual lofty standard. It just seemed a little less refined and polished than what I’m accustomed to seeing. That being said, the panel where Batgirl is hugging Nightwing and the splash page where we first see Karna’s reflection in the window are all great. The page with Karna is especially good because it really portrays her as this glamourous but also demonic entity; which is exactly how I picture a character like her to be. There are also some really clever techniques used to showcase glitches on screens and Terminals changing their appearance. While I absolutely loved the design of Nightwing’s new motorbike, I was kind of disappointed with the color in the interior of the truck itself. Every surface is the same shade of greyish blue and it makes it look very drab and boring. I understand that it’s supposed to be a sleek, minimalist design; but I don’t think adding a bit more colour would detract from that in any way.

Final Thoughts: An issue filled with clunky tech speak, bad puns, awkward dialogue, a poor characterization of the main characters, a heavy handed approach to the dangers of technology and a plot that is just spinning its wheels. Give this story arc a pass and pick up Percy’s run on Green Arrow instead.