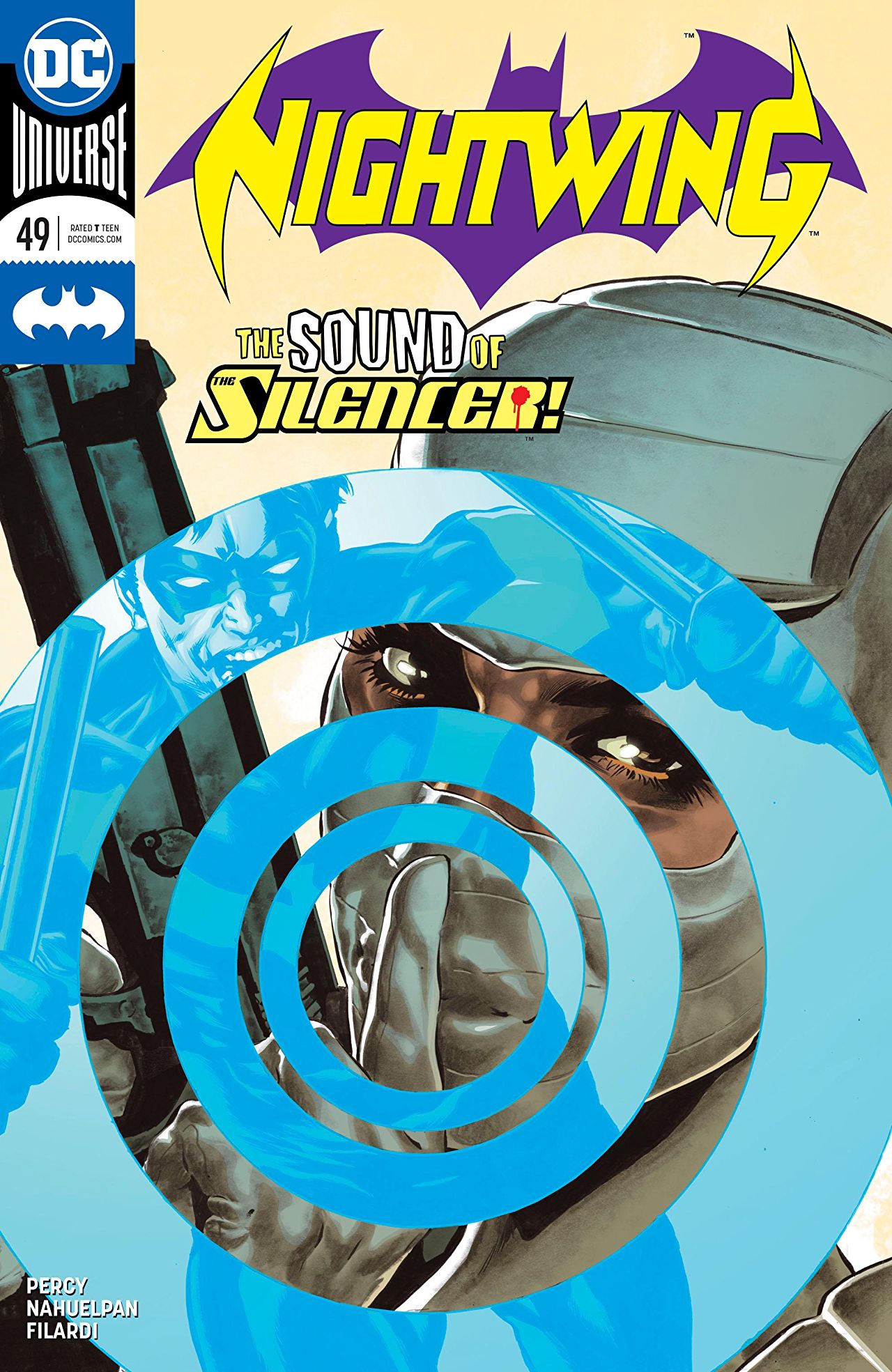 Overview: The second half of the greatest motorcycle race in the cosmos is filled with obstacles as Nightwing and Silencer battle their way to the finish line.

Synopsis (spoilers ahead): The issue opens with Silencer shooting at Nightwing. She manages to hit his bike’s tire and knock him off the bike. She scoops him up on the way past and explains that she wasn’t trying to shoot him, but was trying to save him as Leviathan has put a bomb on his bike. She explains that an agent of Leviathan named Endgame is hunting him and she also demonstrates how her powers work and why she’s called the Silencer. She continues by saying she was aiming for Endgame in the pub because he was about to stab Nightwing. Silencer wants to use Nightwing as bait to try to kill the Leviathan underbosses to get out of the assassin life. Nightwing goes along with it on the condition that she helps him cross the finish line first and they both decide to get back in the race.

As they rejoin the race, Silencer tries to get Nightwing a new bike by shooting the rider, but she is stopped by Nightwing. Nightwing instead uses a flip maneuver to steal a bike from someone else. Endgame shows up and attempts to kill Silencer and Nightwing decides to double back and help her out. Unfortunately, Professor Pyg makes his reappearance at this point and Nightwing is forced to deal with his dollotrons while Flamingo also closes in on the action. Nightwing flings a dollotron at Flamingo to knock him off his bike and Nightwing steals the bike on the move to catch up with Endgame and Silencer. Flamingo uses a whip to latch himself onto Pyg’s flying motorbike as Pyg tries to catch up to Nightwing.

The race enters the final stretch and all the racers go into a large jump to get past a break in the track. Nightwing uses this moment to grab a hold of Silencer and save her as Endgame crashes into the waters below. With the finish line ahead, Silencer honors her promise to help Nightwing and uses mini-marble explosives to bring down Pyg and Flamingo. She moves in for the kill but Nightwing convinces her not to do it by saying there is always another way.

Analysis: The strongest aspect of this issue, in my opinion, is the dynamic between Nightwing and Silencer. Nightwing’s optimism and idealism being a catalyst for positive change in Silencer’s methods was a really meaningful moment to read through. Those who have been following Silencer’s adventures in her own series will know that she is desperate to escape the violent life she lived for most of her life and settle down and live a normal life with her family. Here, she tries to do the right thing by saving Nightwing but her methods are still reflective of her old life. She wants to be better but she’s become so accustomed to the assassin’s way of killing that it seemed like she needed someone to help her realize that there’s another way. Nightwing being the positive influence that gently guides her in this direction was just more proof that he connects and relates to so many characters in the DC Universe.

While I liked the character moments, I do think the ending of this issue fell rather flat. Part of that could be because Percy is abruptly leaving the title, but I got to the last page and found myself asking “is that it?”. Nightwing gets to the omniscient altar and simply asks for more time. I doubt we will ever see this storyline wrapped up in a satisfying way because the new creative team will be telling their own story and also because of the events of Batman #55. I hope time passes slowly in whatever dimension Vicky Vale and Willem Cloke are in because it seems like they’re going to be there for a while. Oh, and Wyrm is still out there too.

I loved the high octane action of the motorcycle race but I wonder if Pyg and Flamingo were the right supporting villains for this story. Upon further reflection, I think their presence was superfluous to the story as they didn’t really seem to have any purpose. The assassin Silencer warned Nightwing about, Endgame, felt more appropriate and dangerous, and yet it seemed like he got far less time on the page than Pyg and Flamingo.

I was very complimentary of this art team in my review of the previous issue and I have the same feelings about their work on this issue. A really great job overall and I love that they continue to use double-page spreads for most of the high-speed action. Many sci-fi fans like myself were no doubt thrilled to see Nightwing ride a TRON light cycle. However, I am confused about how and why he lost it. One second he’s riding the light cycle and then the next second he’s stealing Flamingo’s bike for reasons that didn’t seem clear to me.

Finally, an underrated aspect of this issue might be some of the humor. I think a good Nightwing book should always have a solid quip or two and we certainly get that here. Nightwing saying he’d like to hire Silencer to follow Damian around and that the world would thank him was hilarious. Pyg joking about Nightwing’s nice hams also got a chuckle.