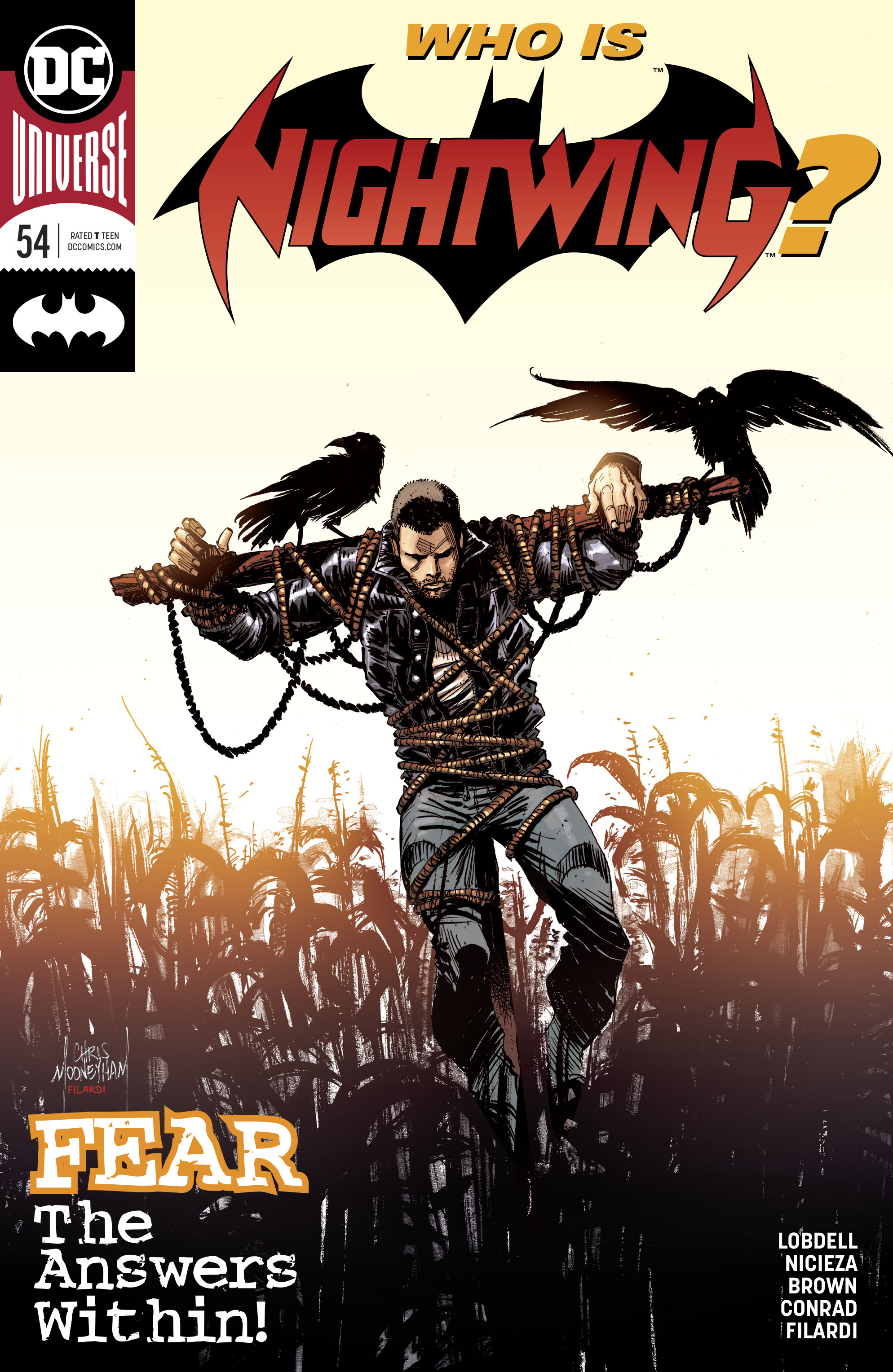 Overview:  Ric Grayson has a breakthrough in therapy and moves forward in his relationship with Bea. Meanwhile, Sapienza and his crew patrol the streets as Nightwings.

Synopsis (spoilers ahead):  Zak and Colleen Edwards (first seen in Nightwing #52) are at the shooting range wearing Nightwing costumes and discuss being able to help people as vigilantes.  Zak has some reservations but Colleen is very into the idea.

Ric Grayson is in a therapy session with Dr. Gruidae and talks about his recovery and not being able to connect with the people he used to know.  Ric leaves in a contemplative mood and realizes he still feels no desire to be Nightwing.

Out on the streets, Sapienza and Hutch take down a burglar.

A few days later, Ric stops by at Avalon Heights for an appointment with Dr. Gruidae.  They talk about fear and Ric mentions how he doesn’t feel fear because he’s grateful to be able to live normally.  He wonders if Dick Grayson should be the one in therapy because a normal person doesn’t learn all the skills he did.  As Ric walks out, he sees a door that has been taped up and Dr. Grudae tells him it was due to an earlier session (see the end of the previous issue).

At night, the Edwards siblings are trying to fight crime as Nightwings, but their efforts result in someone potentially dying.  Colleen decides to call it in and not tell Sapienza.

The next day, Ric visits Bea who is working at the St. Bernadine’s Food Pantry.  He decides to help her out.  At night, Sapienza (dressed as Nightwing) chases a perp across the rooftops.  As he tackles the perp to the ground, a chopper flies overhead and records video that is broadcast to all of Bludhaven.  On the streets, the people roar their support of Nightwing.

Ric is back for another session with Dr. Gruidae.  The doctor tells Ric a story about how a young boy once taught him that eliminating fear was a worthy approach.  He gives Ric a clean bill of health and discharges him.  Ric finds Bea waiting outside for him.  He explains to her that this was his last appointment and that he is finally ready to embrace his new life.  They kiss.

At the suites at Avalon Heights, Crane brings two plates of food to a table and delivers a sinister monologue to someone we cannot see.  The issue ends with Crane holding a Nightwing doll.

Analysis: This issue continues the strong momentum the Nightwing series picked up in the last issue.  One of the most impressive things Lobdell and Nicieza are doing right now is how deftly they are handling the numerous storylines that are ongoing.  I was critical of the placement and brevity of some of the supporting scenes in the earlier issues, but the last two issues have been really strong in this regard.  I really liked seeing Dick talk more about his recovery process.  I think that was glossed over originally so I’m glad that it’s being addressed now.

When I first read this issue, I thought it was a bit repetitive how Dick would constantly mention how he doesn’t want to be Nightwing.  But on a second reading, I realized that repeating these types of self-affirmation is exactly what someone trying to figure out who they are would do.  Now that he has received a “clean bill of mental health”, I hope we start to see him move past this repetitiveness a bit.  The page where Dick questions the mental state of the costumed heroes but also expresses happiness that the new Nightwing is into being Nightwing is a great example of showing how Dick might have lost his memories, but he’s still the same person deep down.  His trademark good nature and ability to be happy for people is still intact.

The pages involving Sapienza and his crew are very brief scenes, but they give us a good insight into what drives these people.  I hope we get to see them developed just a little bit more in the next issue.  The scenes are almost always juxtaposed against Ric questioning why he or anyone would be a vigilante and I think the pairing works well.

While my opinion on this issue is generally positive, I do think it works best on its own.  That’s a problem when Ric/Dick shares a universe with other characters.  I find it hard to believe that Batman or Barbara wouldn’t know that Dick is going to therapy sessions with the Scarecrow.  I know they are staying out of his life, but I do think they would still keep tabs on him.  Another part that took me out of the story for a bit was when Dick refused to mention being Nightwing to Dr. Gruidae.  To Dick/Ric, Dr. Gruidae is just a helpful doctor and not the Scarecrow.  If Dick/Ric doesn’t care about being Nightwing anymore and knows he will never return to that role, why wouldn’t he open up and share completely with his therapist?  Instead, he tells Crane about the particular set of skills he has as well as the fact that he got shot in the head.  I find it hard to believe that Crane wouldn’t put the pieces together and figure out Dick/Ric was Nightwing.  That might still be possible based on the last few pages of this issue, but I doubt that happens.

Speaking of the last few pages, that cliffhanger was very well handled.  I do not know if Crane was speaking to another character, speaking to himself or breaking the fourth wall and speaking to the reader because of how the scene was drawn.  All the options could lead in some interesting directions for the next issue.

The art was decent for the most part but I found the styles of the two artists to be too different to work together seamlessly.  I can only speculate that the changes to the title have created the need for multiple artists to be on the book to get the art done on time.  Conrad’s work is great and Brown’s is the best of his work on the Nightwing series.  Filardi does a great job with the colors and does his best to make the issue flow artistically.  I had no major issues with the lettering, but the letter “i” looked a bit weird in the font used for the credits and to describe the location or time of a scene. Although, perhaps it was simply an issue with my copy of the issue.

Final Thoughts: A reasonably interesting issue that does a good job of balancing the many storylines.