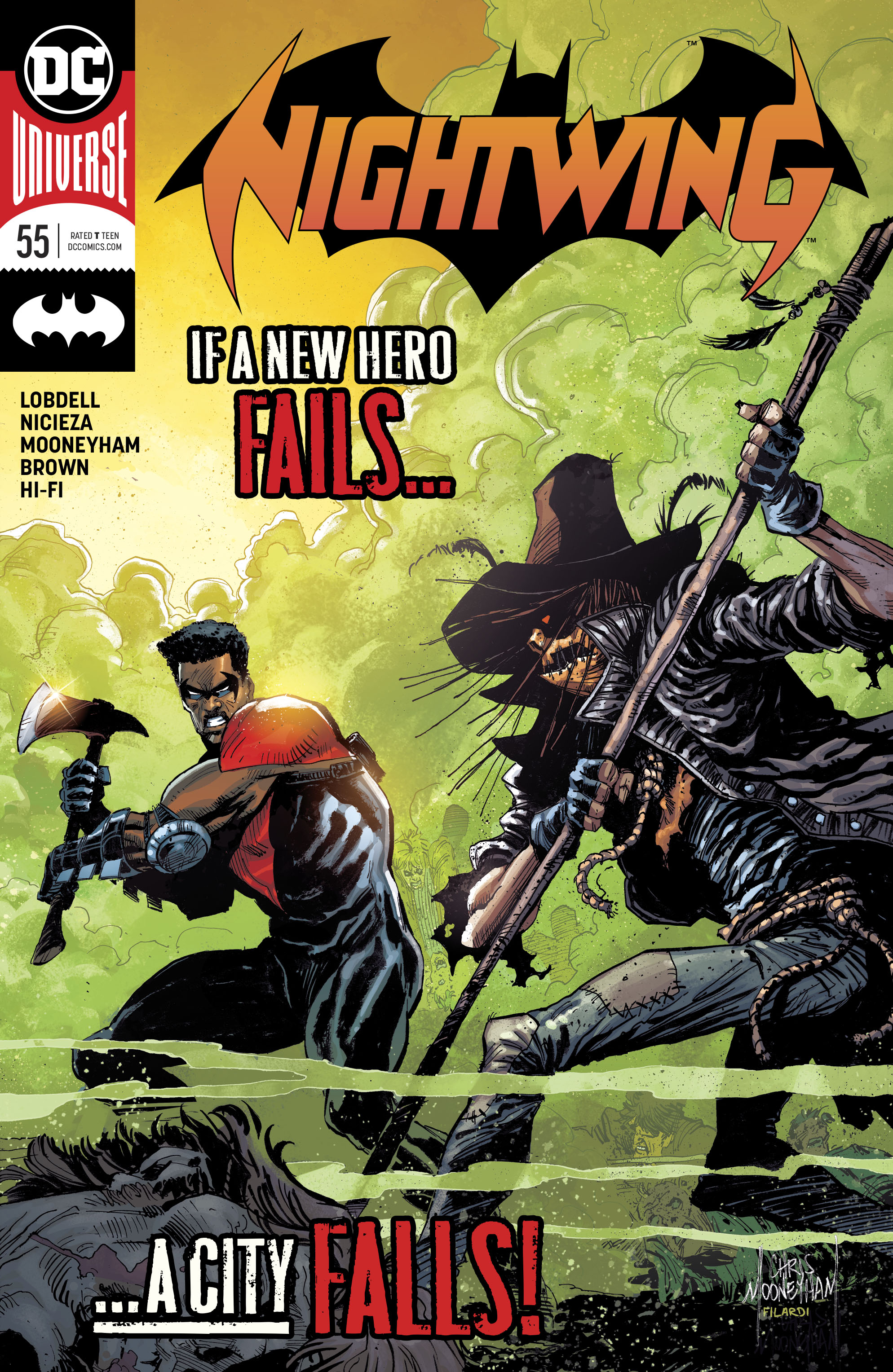 Overview: The Scarecrow sets his evil plans in motion, poisoning the populace with a toxin that makes everyone so aggressively afraid that they engage in extreme violence to fight their fear. The four police Nightwings jump into action, while Ric protects the Prodigal Bar.

Synopsis (spoilers ahead): At sundown, Ric and Bea are trading banter before a fight breaks out outside the back of the Prodigal Bar. Ric puts himself between Bea and the other patrons, taking on the violent ‘Havenites on his own, and relying on muscle memory to defend himself.

One hour earlier, the four people who’ve discovered Nightwing’s costumes (Detective Sapienza, Deputy Fire Chief Malcolm Hutch, Detective Colleen Edwards and her brother Detective Zak Edwards) trade pleasantries on how they’re protecting Blüdhaven both in and out of the costume. It’s Hutch’s shift that night, so he heads off for “Pajama Patrol.” Sapienza questions Zak if there’s something on his mind, to which the Edwards brother assures him that he’s fine.

At Avalon Heights, Room 41, Detective Elise Svoboda questions Dr. Gruidae a.k.a. Jonathan Crane (a.k.a. the Scarecrow) about his past work in Gotham City. Crane quickly tosses off the pretense and gasses Svoboda with fear toxin, making her believe he snapped her neck. He heads downstairs and outside the hotel, stating that all is not right in the city of Blüdhaven. As he dons his Scarecrow costume, and more are affected by his fear toxin, Hutch – as – Nightwing observes the situation. Sapienza forbids him from jumping into action and cautions the rest of the team, as they’re not prepared to fight supervillains, but Hutch is determined to rescue civilians.

Back at the Prodigal Bar, Ric barricades Bea and the others inside while he takes on more crazed victims of the toxin. During the action he muses on how his muscle memory never fails to kick in, and yet he still can’t recall his life as Nightwing.

Over at Cardy Park in Avalon Heights, the Scarecrow says (to no one in particular) how Robin’s fearlessness used to unnerve him, and his plan is to get revenge on him, now as Nightwing. The four Nightwings arrive on the scene, leaving Crane with no end of excitement.

Analysis: The “Knights of Terror” arc has manifested into an intriguing Nightwing story. Beginning as an irritating mechanism seemingly engineered to keep Dick and Barbara Gordon apart after they recently re-entered their relationship, the focus is now on Blüdhaven’s need for a hero and Scarecrow’s yearning for vengeance. The latter idea has been done before in various stories, but the former has been an intriguing journey into Nightwing’s effect and legacy in the ‘Haven. But has it justified taking Dick’s memory away?

Let’s start with the Scarecrow. This is – to my immediate mind – the fourth time a Batman villain has expressed a personal grudge with the Dick Grayson Robin. The idea of the Boy Wonder ticking off a Bat-Rogue so much as to give them a complex was first explored in Batman #368 (1983) with the villain Crazy Quilt enacting his revenge on the newly-trained Jason Todd (this story was also adapted somewhat in the Batman: The Brave and the Bold cartoon). Later in 1994, Robin #0 gave Two-Face a Robin hang-up, introducing the death of DA Aldrich Meany into Dick’s personal history, and that story continued throughout the events of Prodigal. Finally, in Robin #85, the Joker talks about his obsession with Robin in general.

This isn’t to say that Batman villains cannot hate Robin to the point of bearing a grudge. Hating him to the point of a complex strikes as more specific to the idea of Crazy Quilt, as that villain never had much lasting power aside from his mad-on for the Boy Wonder. The point, really, is that villains like Scarecrow, Two-Face, or Joker don’t need to have Robin obsessions added to their list of gimmicks. It’s another notch under the supervillain belt of motivations, including mommy and daddy issues, histories of abuse and problems at work. Of all of them, I think the Scarecrow’s problems make the most sense. Robin was always written to be the “laughing daredevil”, and his addition to Batman’s war on crime would ideally make crooks nervous. Someone like Jonathan Crane would absolutely loathe the kid. So the concept is sound, it just falls under a list of “been there, done that”s. Additionally, Nightwing scared the crap out of Crane before in the early Chuck Dixon run, so there is a small history to pluck from. There’s probably another conversation about villains knowing Nightwing was the first Robin, but that’s for more space in a different review.

As said before, the four police officers operating as Nightwing is an intriguing premise. Nothing much has been done with them, but Lobdell and Nicieza have so far avoided the “power corrupts” trap that’s befallen so many also-ran pretenders to the mantle. It also questions the kind of character Nightwing is meant to be. What differentiates one Nightwing from another aside from acrobatic acumen and crime-fighting experience? Might he really be just a person in a mask? I’m sure that will come up later down the line, but for now, these are just ideas for the book to feather around without really scratching the itch.

There’s not much at all to speak of in the case of Ric Grayson. It’s as though every issue has him going on about what he doesn’t remember and his muscle memory, but there’s been no real forward progression, and this issue is no exception. The artwork by Mooneyham and Brown recalls John Romita Jr., Howard Chaykin, Klaus Janson or Bill Sienkiewicz. It’s rough and scratchy, but stylish and confident. It’s not my preferred take for a Nightwing book, feeling more at home for a Detective Comics run. Despite Blüdhaven’s crappy reputation, I feel there should be more elegance to the artwork, reflecting the character’s elegant action sequences. However, our Nightwing isn’t around anymore, so perhaps the scratchier choice of artists is subtler and more intentional than upon first glance.

Final Thoughts: This is a chapter in an ongoing story that moves things along but doesn’t provide any real investigation or exploration in any of the characters. It reads like an old-school 90s comic, but that’s not a bad thing. It’s entertaining and distracting, even if it is a bit shallow. Only the ending will justify this story or not, and hopefully, this part six of however-many won’t be the sum of all parts.