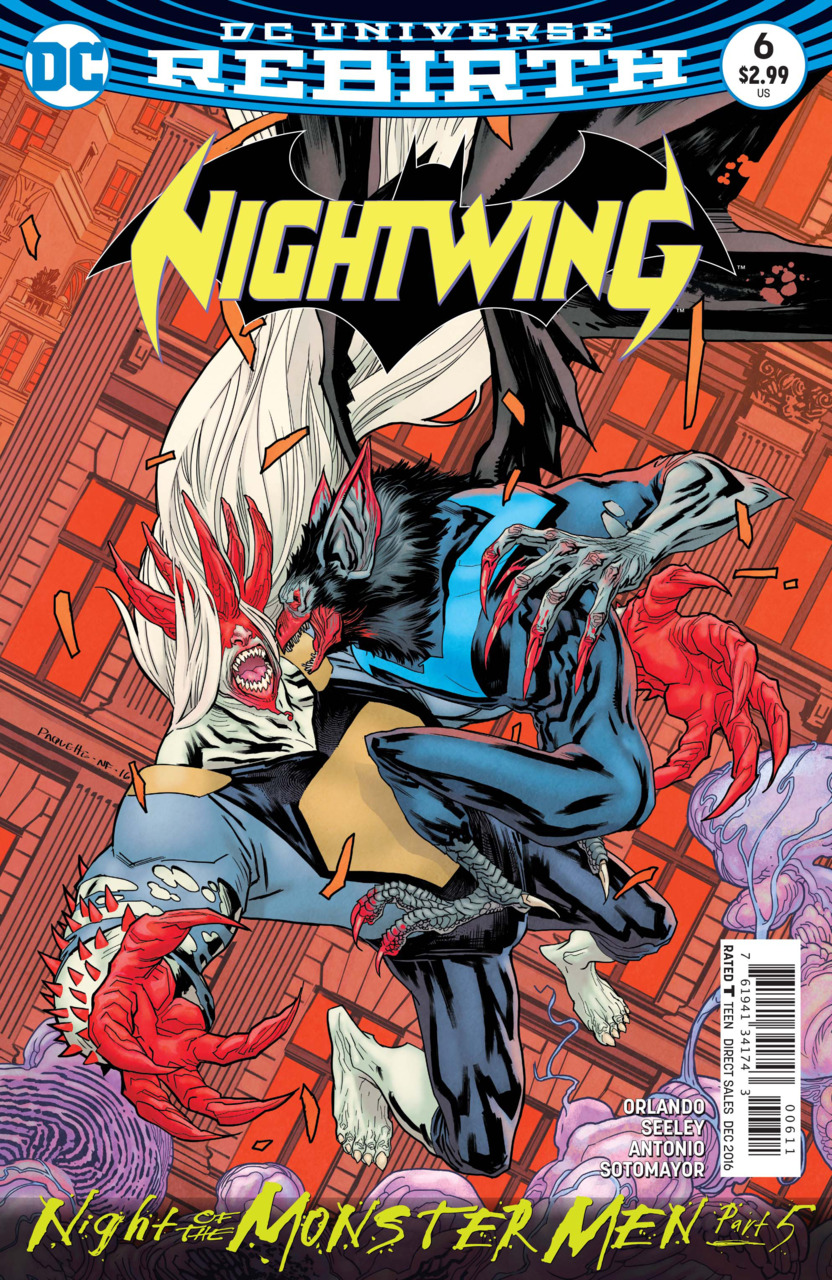 Night of the Monster Men may well be my least favorite bat-event in the last 10 years – which isn’t to say it doesn’t have some redeeming moments, but they haven’t lifted this event out of a deadening feeling that has disrupted the flow of the Nightwing title. Unlike some readers, I am not averse to a comic event, in particular a bat-event, but this one has back-fired spectacularly in this reader’s opinion.

Plot first. Nightwing was turned into a monster in a tie-in issue, looking similar to a species of Man-Bat, and Batwoman (who is developing well inside this Event) is wrestling with him as she plunges off a skyscraper. They eventually land in a complicated manner, as Gotham Girl (who I really hope doesn’t stick around, though every indication appears to be that she will) hits Nightwing with a lancet at point blank rage that transforms him back to humanity. OK.

Due to my responsibilities to give a fair review, I have read the tie-in issues for this event. Unfortunately, I don’t believe that a reader who just picks Nightwing #6 would understand the events with Bullock, Orphan and Spoiler in the cave where citizens of Gotham are recovering after becoming infected and enraged by what I think was a gas of some sort. Which then became a massive insect like monster called the Venom Monster that is walking toward Gotham? Or something like that. It’s a curiously vague threat, an opportunity for the artists to toy with nightmarish visions regarding the monsters, (which are all weird, pulled out of some dystopian anime style) but it does affect the believability of proceedings, already stretched thin by the constant appearances of Gotham Girl. I strongly urge DC to put up a front page explaining these tie-in issues in shorthand style. I can’t understand the argument against that.

Anyway, now everybody is trusting Gotham Girl (I don’t), Duke looks like a gold Power Ranger in his new outfit, (he is consigned to us as some sort of Batman PA, so we may as well suffer his existence) and Gotham Girl flies Spoiler and the recovering Nightwing to the top of an enormous tower, where Spoiler’s cool staff can bring up those fancy holographic images we all love and adore and wish we had in regular life in 2016.

Spoiler and Nightwing quickly work out through footage and deduction (“I’m the Cluemaster’s daughter”, Steph reminds us) how Hugo Strange has in essence twisted his therapy subjects by turning their own feelings/neuroses  against them – manipulation, fear, grief, lack of control in a media driven world. Weighty topics, but not particularly well explored ones.

Anyway, Monster Venom, the creature which came crawling out of the caves proceeds to follow Nightwing and Spoiler to the rooftop, as Batman squawks hard to understand instructions about people standing down and not standing down. In the words of Jay Z, we have a moment of clarity as Monster Venom (a name I loathe) appears on the skyscraper and Nightwing activates the Wayne Watchtowers promptly sets off a huge electrical charge which zaps the monster and plunges the city into dark. This scene I thought was really cool. More of that, please.

Batman and the Bat-family then appear on top of a rooftop. Nightwing who had momentarily lost his mask due to becoming a monster, has one again, a spare tucked into the lining of his suit. Nightwing explains how Strange manipulated the subjects to somehow be “a statement on Batman.”  As pop psychology goes, this all seems very bubblegum, but Batman seems too take it on board and Batman goes to confront Dr. Hugo Strange all by himself which is exactly what Strange wants…

The cliffhanger page showing Hugo Strange is very cool, and easily my favorite part of the issue. I have zero doubts about the creative team on this title, even though I have misgivings about how quickly the Rebirth Batman Universe seems to have been plunged into a cross event. For long-time readers who might recall the classic Legends of the Dark Knight story Prey, there’s a cool sense of continuity and reflection in Hugo Strange’s appearance – for a new reader, it’s still a tremendously powerful image. He is such a creeper.

As critical as I have been of this bat-event in general, the basic storyline beats of the Nightwing title and creative team remain strong and it would be churlish to pretend otherwise. I remain excited about the entire Batman Universe and I can accept that to meld this team together for this tie in was a challenge on everybody, every creature team across the Bat-Books – for my money editorial should have waited a few more months to give the characters and their plot lines time to breath.

We don’t, however, always get what we want. Nightwing #6 is a three star issue in a two star event.