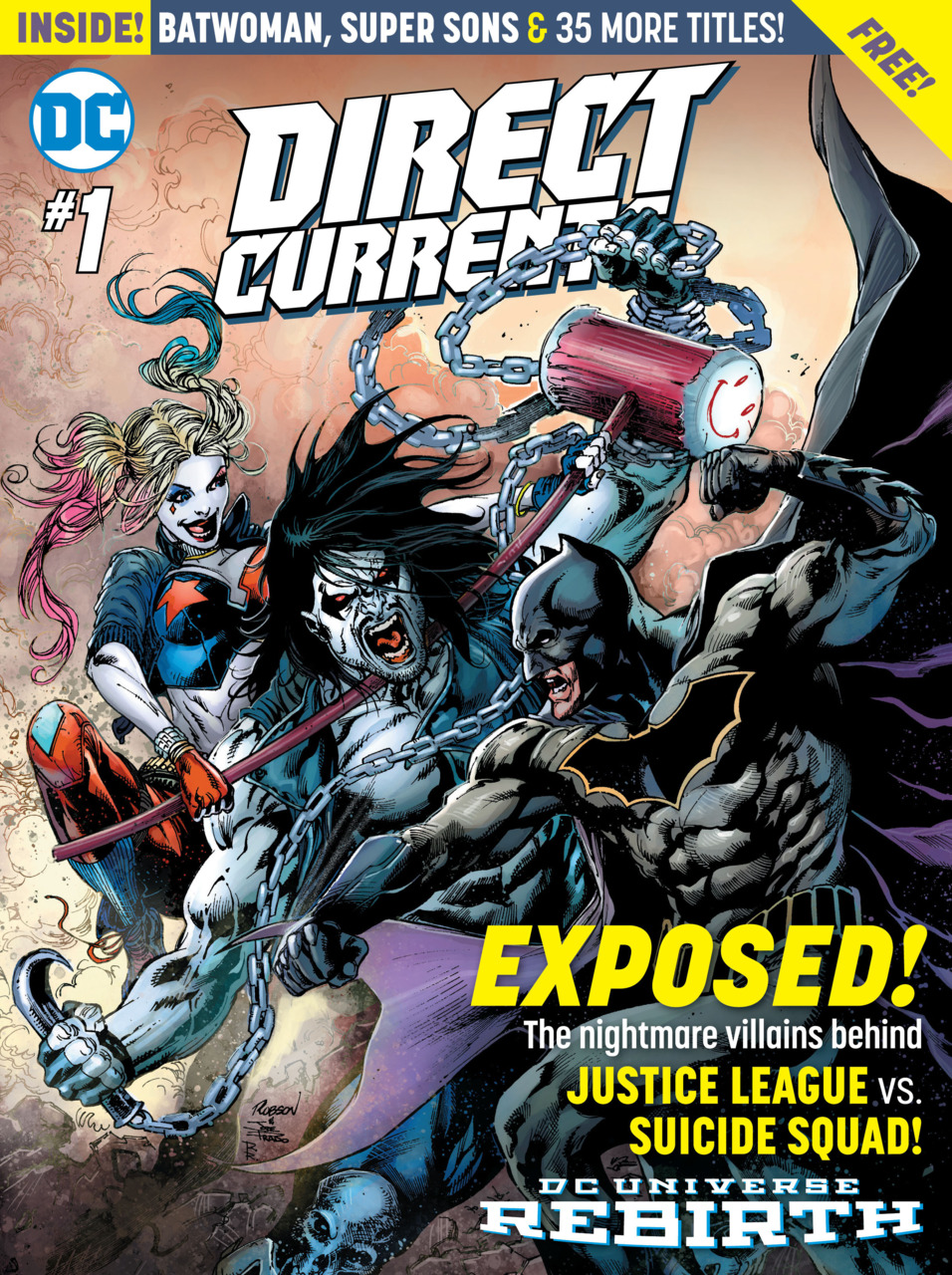 DC Comics has new promotional tool that they have rolled out for Rebirth. Direct Currents is something of a magazine that layouts out some of the directions of our favortie characters in the coming months and lets fans know what to expect. In the first issue of Direct Currents, there are plenty of sneak previews of some of the upcoming action in The Batman Universe. Here are some of the highlights of the action coming to your favorite characters.

What if there isn’t a single group of heroes in the world that can protect humanity from a gang of  sup-sup-super baddies? If you are Amanda Waller the answer is easy: ‘get two groups of heroes’. So begins what is a seriously ill-advised team up between the Justice League and Suicide Squad. As the ‘good guys’ try to cooperate to fight the likes of Maxwell Lord, Lobo, and the Emerald Empress, will they end up killing off each other first? The story, written by Joshua Williamson and drawn by a carousel of artists, begins in Suicide Squad #9 and continues in Justice League vs. Suicide Squad #1 at the end of December.

Bane Battle – Bane is back. Batman is going to have his hands full when his arch nemesis returns to Gotham to reek havoc and maybe take out the Bat once and for all. With his mix of brains and brawn, Bane is one of Batman’s most dangerous foes. All the action starts in Batman #16 written by Tom King with art by David Finch.

All-Star Batman #6 – Mr. Freeze attempts to start another Ice Age and Batman has to head to Alaska to stop the chilly villain. Scott Snyder is joined by artist Jock who bring us to a snowy and icy climate for all the hot action. The art looks abstract and stark with the characters and action emerging from a bleak spare panel. What we see in the preview is coolly beautiful with just a touch of color which really jumps out at you.

This is the book I’m most looking forward to. Batwoman hunts down the source of the toxin that was responsible for the recent Monster Men arc in Detective comics. Writer Marguerite Bennett, the writer of DC Comics Bombshells, is joined by artist Steve Epting in this jaunt outside of Gotham City into Kate Kane’s shadowy past. Epting hasn’t worked on a DC book since 2001’s Aquaman as near as I can tell. It will be good to see what he can do with Kate, I’ll be reading to find out.

Babs returns to Burnside and has a new love interest in Ethan Cobblepot, of the Gotham Cobblepots. How is she going to work out a relationship with the son of Penguin?

Harley battles her heroine (at least according to Harley’s Little Black Book) Wonder Woman in Justice League vs. Suicide Squad #2. It is hard to imagine Quinn overcoming the Amazon but I wouldn’t count out our little psycho too easily.

In Harley’s main title she is going to have a run in with an apologetic Joker. If that sounds fishy to you it means that you have been paying attention. Personally, I am not a fan of Harley and Joker together, I’d prefer she left the past in the past. However, as long as Joker sells comic books I imagine we won’t be getting rid of him any time soon.

Super Sons – Damian and Jon Kent square off against each other in a pint sized battle for the ages. The pair first meeting is in Superman #10 and then the solo title begins in February. Writer Peter J. Tomasi is joined by artist Jorge Jimenez in this tale of teenage angst.

Teen Titans – Damian has recruited Raven, Beast Boy, Starfire, and Kid Flash to fight the minions of ol’ grampa Ra’s al Ghul. Damian has to get his new team to fight his buddies from his old Alma Mater the League of Assassins.. The fight begins in Teen Titans #4 written by Benjamin Percy and art by Khoi Pham.

Also, Nightwing returns to Bludhaven to battle some old enemies in Nightwing #10. And Huntress, Batgirl, and Black Canary look into buying some Gotham real estate together in Birds of Prey #7.

What do you think of all the new stuff coming to the titles? Sound off below!