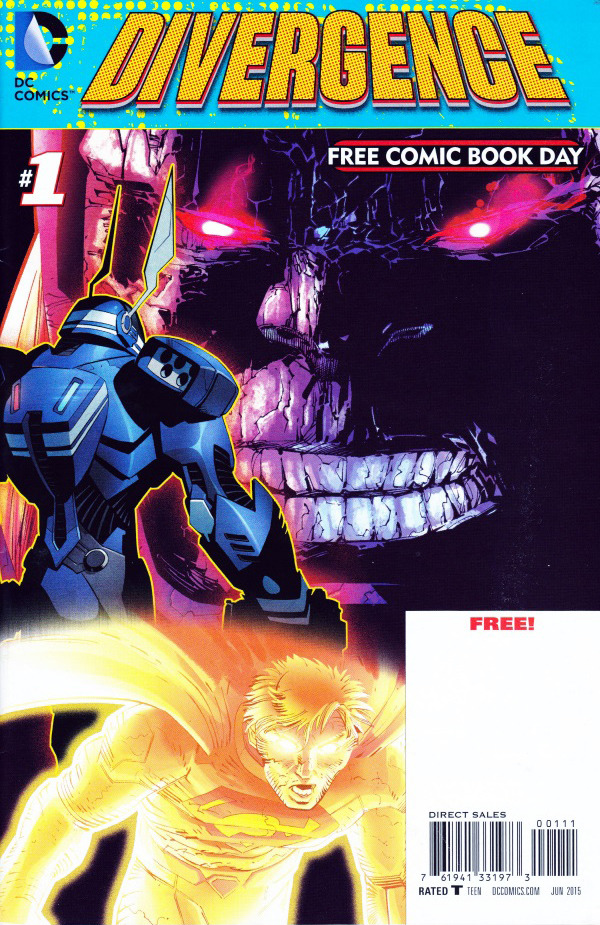 Kicking off this year’s FCBD DC book, the first story entitled “The Rookie” delves back into the world of Scott Snyder’s “Batman” and sets the story two months after the events of “Endgame.” The story opens with a news reporter talking about the public’s reaction to the demise of Batman…he talks about how the batsignal would blaze into the sky, you could hear the rumble of his car and know that Batman is coming. But now, he isn’t coming…not anymore. As dozens (if not hundreds) of Gothamites stand united, they shine red batsignals into the air to mourn the loss of the Caped Crusader. The reporter then goes on to recap the events of Batman’s death and (in his opinion) managed to take down one of Gotham’s deadliest foes – The Joker. He then turns his report to Powers International who has taken it upon themselves to introduce a new Batman.

We then meet CEO Geri Powers who talks about wanting to honor Batman’s sacrifice and she and her company have been working with the Mayor’s office and GCPD to debut the new Dark Knight. As an unseen man turns off the television, he comments that Geri (who is standing in the room with him) might have gone a bit far in her interview. As she stands by what she said, she makes a comment about the unknown man quitting smoking…which he counters that this (he’s smoking currently) is his last one. As the two leave the room, they quickly discuss the two months of training the man went through and about his new haircut and shave. As Powers pulls open a door and asks “are you ready to be Batman?” the lights reveal none other than James Gordon standing before the new, blue Robo-Bat costume. As Gordon admits that this may be the dumbest idea ever…the story ends with him asking where his batmobile is.

In the “Justice League” story, we continue with the prologue to “The Darkseid War” and the tale opens upon Paradise Island…the same night that Hippolyta gave birth to Diana (aka Wonder Woman). However our focus shifts to cave on the island where an Amazonian assassin named Myrina is also giving birth. Present with her are the Amazons named Penelope and Menalippe…the latter of which is an oracle that can see the future. As the baby is born, the other two recoil in fear as the baby is born with grey skin and blood red eyes. At this moment, Menalippe seems to be overcome with a vision that she describes as a dark and terrible war. In her vision she witnesses a battle between the dark god Darkseid and the anti-god the Anti-Monitor…additionally she sees flashes of the various heroes involved – Green Lantern (Hal Jordan), Batman (Bruce Wayne), Lex Luthor, Aquaman, Cyborg, Shazam, Mr. Miracle and Wonder Woman. As the two Amazons realize that this newborn will be the cause of the war, Penelope moves to kill the child. However, Myrina kicks Penelope off of the cliff side and states that she wants this war to occur (additionally we also learn that Darkseid is the father of the baby). As Menalippe’s vision ends, she sees Superman being engulfed by a white light crying out the name “Mobius!” She then states that if the war occurs then the universe will die.

After killing both Penelope and Menalippe, Myrina fakes all of their deaths and hides her daughter from the Amazons. She states that she was the first Amazon to ever leave Themyscira and that she would kill for her child…now named Grail. The story ends with Grail standing atop a building (now in the present) and states “Death to Darkseid.”

Well, I have to say that although both stories are extremely short both laid the groundwork for some intriguing stories.

In the first, we got to see the aftermath of Batman’s battle against the Joker and how the citizens of Gotham City are mourning his loss. This is something that we didn’t get to see that last time he “died” at the end of “Final Crisis” as the family chose to hide Bruce’s absence and eventually carry on the cowl with Dick Grayson. This time however, Batman’s death is public knowledge and a company is looking to bring a new and better Batman onto the scene – enter James Gordon.

Although this reveal was spoiled a few weeks ago…I have to give props to Dustin on the Comic Cast for calling this reveal before the spoiler ever hit the internet. As soon as James Gordon was thrown out there, all I kept thinking was “this makes perfect sense.” Honestly it is the craziest thing Scott Snyder could pull…we have seen Dick, Jason, Tim and even Jean-Paul Valley all where the cowl at one time or another. But who ever thought about Gordon taking up the mantle? I guess Scott Synder did.

I really like the design of the new Robo-Batsuit or Ro-Bat or Babbit (as Greg Capullo calls it)…although the long antennae ears take some getting used to, I like that the color reminds of some of the original blue batsuits from the Golden and Silver Age…and even up to the modern era like “Batman: Hush.” Although I’m not sure about this new Batman wielding a gun (hopefully it’s a taser or stun gun), I fully approve and am excited to see how Jim Gordon goes about filling in for the Dark Knight.

As for “Justice League,” I am still wholly excited to see Darkseid vs. The Anti-Monitor…even more so now that it was revealed who the mysterious hooded figure at the end of “Justice League” #40 was. We get this new character’s origin in the story and find out that Grail was born the same night as Diana…guess she is supposed to be the Anti-Wonder Woman for this upcoming story.

However what really intrigued me was Menalippe prophecy about the future…it’s curious to see her comments when it comes to the various heroes. Green Lantern is apparently going to make a horrific sacrifice…but yet he is shown shouting at Batman to keep his head clear and keep “it” under control; in the next panel, Batman is shown with the mention of a new god being born…and Batman stating that nothing has ever been clearer in all his life “I know everything.” Next up, hope is lost as Lex Luthor is seen holding Superman’s cape and screaming for his whereabouts; a king will drown as Aquaman is shown being pulled under the water by two unknown figures; science and magic will die as Cyborg is shown to be assisting a struggling Shazam; as for the last panels, Menalippe highlights that both Mr. Miracle will be present and Wonder Woman as well. Interestingly, Superman is absent until the vision ends when he is engulfed in light and is screaming the name Mobius.

Overall I am interested to see how this war is going to play out…essentially it’s Darkseid vs. Anti-Monitor with the League caught in the middle…I’m also curious as to what is going to happen to Batman in this story. Maybe he makes his return from the dead in this story?

In addition to this two tales, a third showcases the new status quo in the “Superman” titles where his secret identity as Clark Kent has been revealed to the public by none other than Lois Lane…kind of interesting, we’ll see how this is going to affect the Man of Steel in the coming months.