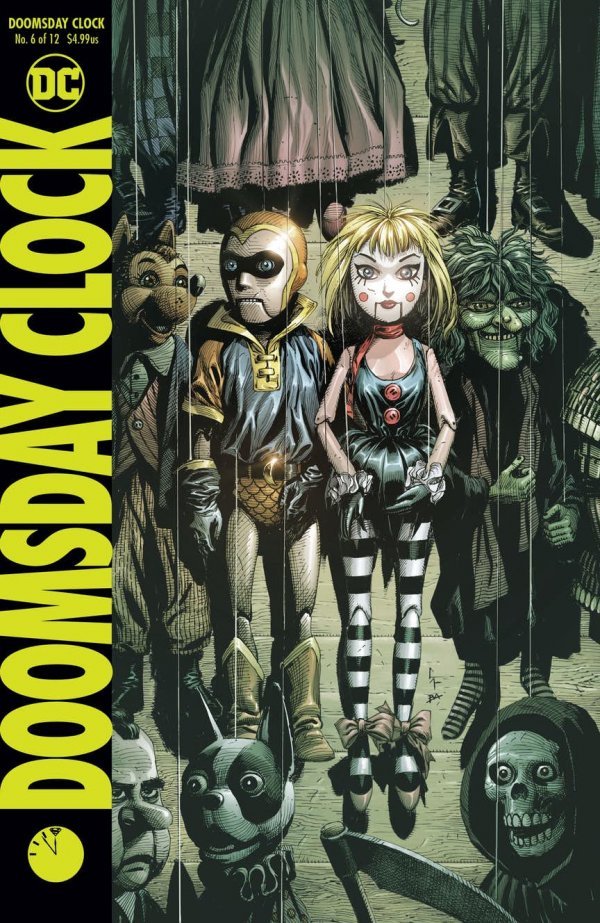 Overview: Reversing their position from captured by to “friends” of the Joker, Mime and Marionette enter the wild world of DC’s rogues, as her past plays parallel to current events.

Synopsis (spoilers ahead): A young Marionette stares at a marionette dress in the clothes she would one day use as inspiration for her own costume. Someone is threatening her father, an immigrant puppeteer who appears to owe something to a gang boss.

Back in the present, Joker is leading Mime, Marionette, and a few thugs through underground tunnels. Batman, paralyzed by nerve toxins and chained to a wheelchair, is being pushed by the clown. Halfway to their destination, they meet three of Mr. Freeze’s men, who Joker brings to his side.

In the past, Marionette – whose real name is Erika – remembers the day the store in front of her father’s first opened. The owners have a boy. His parents, she notices, are fighting over him, the father calling him a “bicho raro”, a weirdo, an outcast. Instead of going to speak with him, Erika decides plays a little puppet show on the store window. Curious, the boy, Marcos, enters the puppet shop. He would later become the Mime.

Back with the Joker, as the newly recruited men get their Joker tattoos, Marionette decided to act. Cutting their guns and poking their eyes and severing their heads, Mime and Marionette take out all of Joker’s men. After cracking a joke, the clown gets them going forward in their path, while Freeze’s ex-thugs stare in disbelief at what just happened.

Erika, back in her childhood days, walks down the street with her marionette. A group of three older kids approaches her, mockingly questioning her father’s morality and her own “creepiness”. She reacts, jumping on one of the kids, but they held her down. A bottle hits one of them, thrown by Marcos, who is ready to throw another one. Erika uses the chance to take down her other attacker.

Back to the Joker, they finally reach the villain meeting they are headed to. In the deactivated subway station, not just Batman’s rogues’ gallery is present, but rogues from across the DC Universe. They start discussing whether to run to Kahndaq or not.

In the past, Erika and her father are discussing what puppet to make to Marcos. Two officers entered the shop, and her father immediately becomes nervous. They announce that Marcos’ mother “took quite a fall”, and he runs out of the shop in a hurry. Erika doesn’t like the officers much.

The meeting of the rogues starts going downhill as their egos start to clash. Typhoon gets in a rage, only to get his brains shot by the Comedian. Only Mime and Marionette know what they’re up against, and Mime tries to draw his fire so that Marionette can escape. Giganta attacks the Comedian before he can take his shot, leaving time for Mime and Marionette to run from the scene. Meanwhile, Riddler gets his right knee blown by the Comedian, who then throws a grenade inside the subway car. Almost everyone is engulfed in the flames except for Joker, Batman, Mime, and Marionette, as well as the Comedian.

The officers, in Erika’s past, come back another day to her father’s shop. He tells her to hide, stay out of sight and then confronts them. They give him no choice. Their boss brought him to this country, the boss owns him and his daughter. They seize Erika, who speaks out once her father gets punched and threaten to take her if the puppeteer does not collaborate. He gives in and tells the men where to find their money.

Erika is adamant that she and Marcos should find a way to help her father. One day, as she returns from school, she finds her father hanging from the ceiling of the shop, a suicide note at his feet telling her to run away. She does, but before she goes, she leaves the bodies of the two officers behind. Marcos joins her.

In the present, they have found refuge in a control room. Mime wants to go back out and draw the Comedian away, but Marionette won’t let him. They’re in this together, she says. After the Rorschach origin in issue #4, we get another intermission-style issue. This time, to tell the origins of Mime and Marionette. A clear development of Dr. Manhattan’s famous quote (as seen above), the structure was chosen to tell their tales happens both in the past and in the present at the same time. It swings back and forth between the memories of Erika, who is Marionette, and the present. The transitions, while ridiculously hard to translate into a synopsis, are majestically executed by Gary Frank, who always use one panel as a hook to tell the reader where in time the next page will happen. These two moments of the story develop simultaneously, but the amount of plot that moved forward in the present was not that significant. The main actions easily summed up in: there is a rogue’s meeting, the Comedian shows up, boom everyone goes. And while this could be detrimental to some readers, this issue gives a lot of insight into the jester characters.

Ending with a Charles Chaplin quote, “To truly laugh, you must be able to take your pain and play with it”, the main characters of this issue are by no accident Mime, Marionette, the Joker and the Comedian. Geoff Johns and Gary Frank make clear who Joker is to them. Speaking with alliterations, oxymorons, metaphors, this Joker plays with his words as he plays with people, always brightly smiling. While an opening monologue about the strings of the powerful controlling the people might suggest a Nolan-esque depiction, I find him to be more akin to the Animated Series, Hamill’s voice playing in the background of my mind as I read the comic.

The Marionette, who is the main character and the point of view of this issue, does not pose the most intriguing character to read. She is easy to read, open, her face nearly as expressive as Joker’s. Non-verbal and fully proficient in body language, the story of the Mime plays in the background of hers. This is a character that could not possibly work under the hands of a less capable storyteller. His silence tells more than anything, as he inflates his chest and arms like a rooster ready to fight, standing behind the eager Marionette whom he is wildly protective of. It makes for an entire second reading of the issue, to go back and just read his poses and body language as he goes from a shy kid to an adult.

Being new characters, deepening their stories is a logical move if Johns and Frank want to make their permanent mark on them. A DC character will almost certainly be appearing again in the future under the pen and pencil of other creators, so to give a definitive origin and portrayal to them will make these characters forever be read as their creation, much like the New Teen Titans will forever, in a way, belong to Wolfman and Perez.

Despite the excellent storytelling, the present facts of this issue does read as if the story is in a bit of a standstill. Even if Batman being strolled around chained to a wheelchair makes for the most bizarrely unexpected image, humorous in a Joker level. The direction this book will take remains a mystery, one that might prove enticing to some readers and halting to others.

Final Thoughts: Filled with bizarre imagery and ultra-violence. Making a parallel between past and future, this issue moves the plot forward only a slim slice.  Focused on the characters, it makes for a delightful read of the Joker, and gives a deep insight into the Mime and Marionette.